Robin Williams, famed comedian and actor, has passed away. He was found dead in his home and the initial investigation suggests he may have committed suicide. He had reportedly been suffering from severe depression. He leaves behind an immense body of work including an unforgettable and inimitable performance as The Genie in Disney's Aladdin, a role he reprised in Aladdin And The King Of Thieves. He was 63. 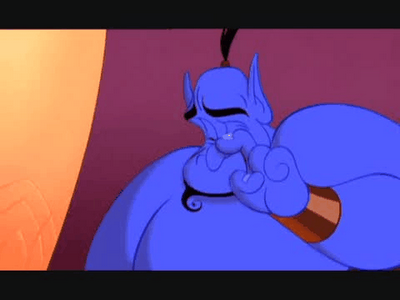 I'm really shocked and very sad. Just recently I was watching clips from Hook, a very underrated movie IMHO. Can't believe he's gone...in addition to his well known roles like Peter Pan, Genie and all the rest, he also had very dark roles like in Insomnia. Also loved him in Good Will Hunting.
The world has lost an absolutely wonderful actor.

And his "breakthrough role" starring in Mork & Mindy.

I was crushed when I heard. So many of his roles touched my heart. Even silly ol' Mork and Mindy, which I was recently watching with my kids, had a very poignant and heartfelt side to it. Robin was immensely talented, but obviously also troubled by mental health issues and some bad choices in terms of substance abuse. It's so sad to see it end this way for him.
Top

Just came back from a few days away to this news last night. I got a text from a friend and immediately put the news on...instead of falling asleep as I really need to do, I just watched for a good couple of hours as the tributes poured in. Such a shocker, so sudden and unexpected.

Like many, RW was a personality I grew up with. He was Mork when I felt like an alien at school, he was Popeye in a truly underrated movie just as I was really getting into that character and saw that he could play other roles and look so different. He was the radio jockey in Good Morning, Vietnam, just as I was getting old enough to go see - and understand - more mature movies, and he was the adult stand-up that both shocked and touched me with his hilarious observations before finding a new path as a family movie entertainer, pushing the boundaries as the voice of the Genie in Aladdin (a *huge* reason why that movie was successfully artistically and commercially, being a major reason why so many teenagers went back to see it over and over), the older Pan in Hook, and, of course, Mrs Doubtfire, a movie I wasn't initially too bothered about but have come to like more over time.

Doubtfire, for me, was when the magic started to fade. He'd reached his top in the early 1990s and, being a addictive personality, I think he found it hard to cope with not remaining on top. A slew of roles in some lesser worthy comedies saw him being funny and remaining a big draw, but it was on the truly artistic side that he then started to get his rewards, in Good Will Hunting, of course, before a new direction into darker dramatic parts became more of his norm than the exception. Looking back, it's actually interesting and perhaps a little unnerving how many of these dealt with the subject of depression and suicide: What Dreams May Come, for starters, another vastly underrated film that really is the closest - despite all the visual effects - to representing the heavy feeling of depression on film, as well as some even darker films in which he was the best thing.

Even here, though, RW found that he wasn't the big star any more, which was something he needed to know was there in order to escape his other demons of drink and drugs. I can easily see how, without any of those things, the old depression would come back and, with the cancelling of his TV show and a lack of either box-office or critical notice more recently, his old habits started to crawl back into his life. Those closest to him might have seen some signs, but depression affects everybody...it's not about money and success: if you can't ask for help and others around you don't know you need it then it's going to keep on creeping up around you. With drink and drugs not exactly conquered but maybe just about being kept in check, but a huge gap in his life where his work was, depression would have really taken a hold and set in...in this case so sadly so for someone who otherwise brought such joy to so many.

He still has several projects to come out: I suspect the upcoming Night At The Museum 3 will be dedicated to him at its Christmas release, while there were at least two more films, I believe, including another animation vocal role, that will be issued next year. We won't now get the belated Mrs Doubtfire sequel, but then again, maybe that's all the well...it could well have been that, after years of resisting largely to do any sequels to his films, that RW felt a return to a previous character for what would have essentially been a re-run or attempt to recapture an earlier time, might have been a sign of failure...that all his future would consist of would be reprising old parts (he'd already shot down a Mork & Mindy reunion), which could feel pretty empty to someone as compulsive and creative as him.

In attempting to understand why someone like this could have done what he's suspected of doing, it doesn't take too much looking under the surface to do so, but it doesn't make the shock for everybody else any less of an impact. In some ways, I could never see RW growing "old"...I just don't think he would be cut out for it. I think he really did need to be that funny-guy, not the center of attention but one that needed the warm glow of applause and awards to feel validated as a human being and to fill the gaps that substance abuse could no longer do. As an addict, once he'd tasted life at the top of his game then anywhere else on that ladder just was never going to be the same.

In many cases we say that someone who has died "will be missed", and I often find those comments empty and merely polite, since their best work and, largely, their careers are behind them. But at just 63 and with many more years ahead of him providing sterling back-up in a number of comedies and dramatic roles, animated vocals and, no doubt, at least one or two further shots of bouncing back with huge award recognition and career retrospectives, in this case it is truly more than warranted.

As a huge fan and supporter, I can only hope he's now in a better place. Robin, you really will be missed.

I have actually been watching this trailer a lot lately. Thought I'd put it here in honor of Robin:

When I was thinking of the animated work he had done, I can't believe I forgot he was in both Happy Feet movies...and in two roles no less! Me and my memory.

Also, Robin did a number of sketches on Sesame Street in the early 90's, and they were all great. Here's one where he's able to let loose with only a stick as his prop:

I remember reading about how Spielberg almost couldn't go through with making Schindler's List because of the toll it took on him emotionally. Robin Williams was actually one of the people who helped him get through it, by making him laugh over the phone.

Such a great guy.

I've never seen the episode but I had heard about this scene...

I don't think I ever watched all of Season 4 when it aired, as it seemed to be getting sillier, but I'd still love to get it on DVD. Having recently watched the first 3 seasons on DVD with my kids, I can attest that it holds up very well--- genuinely funny/hilarious, as well as surprisingly touching and heartfelt. Mork and Mindy was one of Robin's most perfect vehicles.
Top

Mork & Mindy started getting really silly when they added Jonathan Winters as their child. Unfortunately that's the tendency with American TV shows ... they drag them on and on way past the use-by-date.
Top

Never watched Mork and Mindy but that was cute.


“Ahh, fresh victims for my ever-growing army of the undead.
Sir, you have to let go of the button.
Well, son-of-a-bi-“
Top

http://www.latimes.com/entertainment/en ... story.html
“Ahh, fresh victims for my ever-growing army of the undead.
Sir, you have to let go of the button.
Well, son-of-a-bi-“
Top