Adam West is coming back as Batman for a 50th anniversary ('60s live-action TV series) animated film based ostensibly on the old TV series.

Been a while, Mr. West, but from what I've seen and heard most of my life I think you're awesome, you occasionally crack me up... I do not say that very often about a lot of people -- and definitely not most celebrities. He's definitely my favorite live-action Batman of the whole bunch.

(Kevin Conroy is my definitive Batman -- at least as far as the animated shows go. Deidrich Bader was also pretty good in Batman: The Brave & The Bold.)


As a kid, for a while, I belonged in that short-sighted crowd that only accepted a 'dark' Batman like the Frank Miller/Dark Knight Returns version... which I have come to UTTERLY DESPISE over the years. I prefer a more balanced version of the character like the late 1970s comic book version, or (better yet) the 1992-1995 Batman: TAS which is darn close to perfect where I'm concerned.

How can you hate a guy who has the balls to say with a straight face, and, without missing a beat, the following?

Lisa: "Dad, that’s not the real Batman."
Adam West: "Of course I’m Batman. See, here’s a picture of me with Robin."
Bart: "Who the hell is Robin?"
Adam West:" I suppose you’re only familiar with the new Batman movies. Michelle Pfeiffer? Ha! The only true Catwoman is Julie Newmar, Lee Meriwether, or Eartha Kitt. And I didn’t need molded plastic to improve my physique. Pure. West. And why doesn’t Batman dance anymore? Remember the Batusi?" (starts dancing)
Homer: "Heh. Nice meetin’ ya..." (tugging the kids back and whispering) "Just keep moving, don’t make eye contact…"

(Great writing, but it would not have been sold without great delivery...)

GeorgeC wrote:Adam West is coming back as Batman for a 50th anniversary ('60s live-action TV series) animated film based ostensibly on the old TV series.

More likely, it's a DC Animated based on DC's "Batman '66" comic series based entirely on the TV canon/iconography.
Which wouldn't be too bad--I'd rather have that than one more DCA based on Brave & the Bold or Beware the Batman.
Top

Okay, George--- I'm going to use this opportunity to show off a bit... 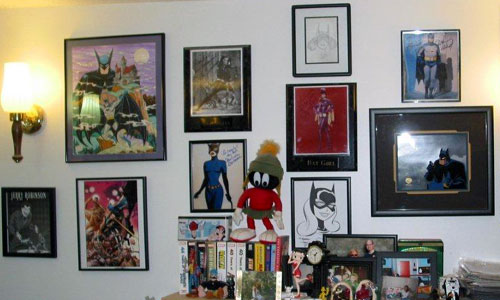 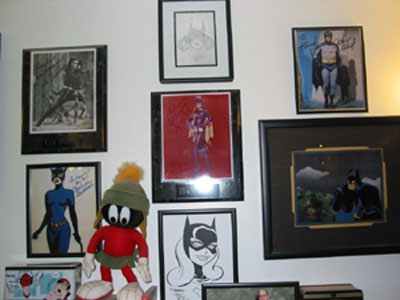 Signed photos of Julie, Yvonne, and Adam, plus signed Catwoman by Adrienne Barbeau; original Batgirl sketches by Carmine Infantino and Bruce Timm (I kid you not!); and an original production cel from Batman TAS; I also have a Kevin Conroy signature over a Timm print, not pictured here
The-Collections-023.jpg (26.05 KiB) Viewed 5381 times Randy with hair is blowing my mind at this point.
Top

How 'bout this, then? You didn't have to show me all that stuff!

I just asked for Adam!

I know there's a slim possibility of this -- realistically -- but I do think I got an e-mail back from her.
Very nice lady from all I've heard...

The funny thing is that in recent comics and The Batman animated series, the Batgirl outfits were definitely patterned after the one they used for her in the live-action Batman TV series. There's stories about that costume and how the original mask they used was very painful for her to wear... they only used the mask in the Batgirl pilot film they shot (which has rarely been shown in public although it's easy enough to find online). The points dug into her cheeks so that's why the facemask was rounded off a bit for the production TV episodes.

You wonder what else wasn't so comfortable... There ARE stories about Robin's outfit in the TV series BUT I think sometimes I push the edge of taste here so I'm NOT going to go into specifics there! Let's just say that Batman TV (1966) producers got a letter or two from the Catholic Decency League about the shorts. If I'm not mistaken, wasn't Burt Wards also wearing flesh-colored tights? (And people thought that Cesar Romero refusing to shave his mustache was ridiculous? You could obviously see it was painted over with white makeup! LOL) They really should have just redesigned the Robin costume back then! It's amazing that it lasted almost 50 years before the Tim Drake/Neil Adams-designed outfit debuted in 1987/1988. That's been the Robin suit that's been featured in most multimedia since!
[I have the distinct feeling that SOME of the reason why the 1966 version of Batman is being featured a lot now is a visceral reaction against how ridiculously dark and sullen the character has gotten since the late 1980s. I don't think it's just about promoting home video sales of the Sixties TV series. People often-times blame Frank Miller 'making Batman TOO dark' and it's not entirely fair -- although he DID in my opinion help start the whole ball of wax that ruined the 'mainstream' comic book Batman for me entirely. Nope, as much as I understand the character is NOT Superman and is a product of childhood trauma -- what's worse than seeing your parents killed in front of you? -- there's a humanity that's been missing from the mainline version in comics for a LONG time... most of the time. The 1990s comic Batman became TOO perfect... He became Bat-god; the guy was out-plotting and beating characters like The Flash and Superman ALL the time which is ridiculous!... That's why I liked the 1990s animated version much better -- it was a far more-balanced version of the character and that series ended up becoming my favorite American action/adventure animated TV series. There's only a few Japanese shows that I probably like even better but the 1992-1995 Batman:TAS is still a favorite. It's close to perfect in many senses. Can't say about a lot of other shows, live-action or animated. And I DID like the guest-shot of Adam West as The Grey Ghost... I thought in some ways that the story hit a little bit too close to home BUT it was nice that he was remembered and respected by the show's writers and producers.]
"Waiter, more champagne...and plenty of ice!"
- Randall/Time Bandits, 14 April 1912, 20 to midnight -- local time
Top

Wasn't exactly sure if we had a thread for the Killing Joke but here's a story on it:

http://www.comicbookresources.com/artic ... lling-joke
“Ahh, fresh victims for my ever-growing army of the undead.
Sir, you have to let go of the button.
Well, son-of-a-bi-“
Top

(Though, it did get sidetracked there for a bit, when someone forgot we already had a DC movies thread. Not naming names...