She was such a great Lois Lane.

Noelle Neil was great too but IMHO Kidder was the best! She and Reeve worked so well together. Maybe they’ll meet in heaven now.

So bummed out right now. At least they’re flying high together again.

Sad news, indeed. Superman The Movie is my favourite all-time film, which was one of the first things in a long line of things that Ben and I agreed on. He enjoyed her Lois more than I, to be honest (Phyllis Coates was the perfect Lois, though that version is dated now), but there's no denying Margot's place in cinematic history. For so many of us, she WAS Lois Lane. And it was a pleasure to meet her in Calgary in 2009, when she leaped up to introduce herself as my friend and I approached her table. With the passage of time, we weren't sure if it was really her, but she left no doubt when she came right up to me and shook my hand, happy to meet a fan. A good memory.
Top

Margot was one of my first celebrity pics. I think it was Comic Con 2005? I didn't know how exactly to go about doing the whole celebs picture thing then, but she was patient with me. Even gave me a pointer or two, which I've been using since.

She was "my" Lois Lane growing up, even when mom was a big fan of the Lois and Clark TV series when it was on. Was extremely bummed to hear of her passing. 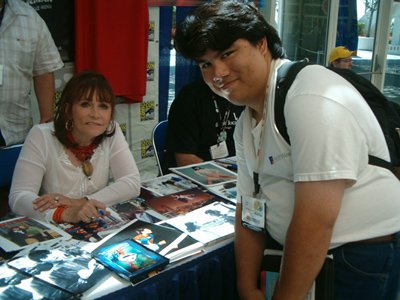 I am not in a good place right now.
"Yesterday is history, tomorrow is a mystery, but today is a gift--that is why it's called the present."
Top

Aw, that's sad. We all knew of her mental health issues, but it's tragic that they took her down this road.
Top

Oh, that’s so sad. Things seemed to be going so much better for her. Then again, with the kind of life she had led, sometimes there can be a bad reaction to when things actually start going okay again. Looks like she couldn’t actually handle being in a good place. So sad; I’d forgotten she was in Waldo Pepper (a seminal childhood film for me, though I haven’t seen it in years) so that gives me even more reason to seek it out again. Hopefully she’s at an eventual peace now.
Top
Post Reply
8 posts • Page 1 of 1