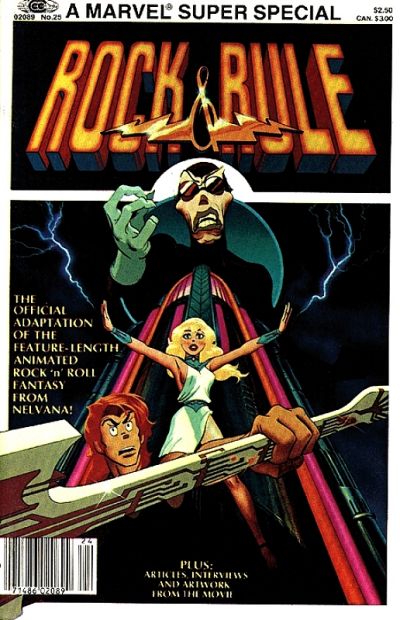 I own a copy of this Rock & Rule Marvel Super Special.

Between the fact that it's a 'photo-novel' (all of the panel artwork is basically 'still-frames' from the movie) -- and the all-too-brief "The Making of Rock & Rule" section in the back .. it's the closest thing this amazing animated feature has to an 'Art Of' book. Even the 2001 book The Nelvana Story devotes only a precious few pages to the film -- with fewer R&R images than seen in Marvel's adaptation!

.. not to mention the fact that Rock & Rule has never had a proper 'official' soundtrack album..!

There is a low-quality 'bootleg' soundtrack out there, though .. which, actually -- given its 1983 vintage -- is perhaps more 'period appropriate' than a squeaky-clean modern CD. I'd definitely spend money on the latter, however .. if only someone would license & release it!

The bright and shiny Tron CD never sounds "right" to me because the way I first heard it was via an audio tape recording off the vinyl release, and the CD loses a lot of that "boxy" feel. The same can be said of the recording on this: even the master vocals on the film soundtrack have that late 70s/early 80s vocal booth sound, like they just made a tiny space with a bit of carpet on the walls, and the lack of reverb doesn’t add any dynamics to how closed in, boxy and flat that can sound. But boy, it takes you back to that time instantly.

Like many, I love Angel's Song from R&R, and would also be all over a proper OST release. There are various "cleaned up" versions out there (the film track doesn’t exactly offer a "music only" option!), but this is the best edition of the tune, albeit re-recorded with different lyrics:

Yeah, wish we got a full soundtrack. My name is mok full version has to use two prints. (the sound is not the same on both)

The cut version from the film. Is it me or do those girls look like prototype harley quenns? 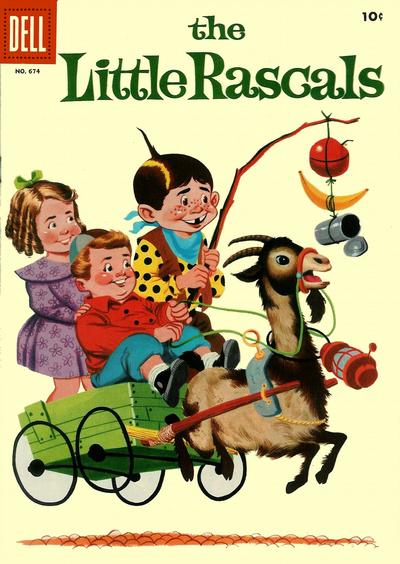 Anyone even remember comic strip taffy? they got a full comic also. 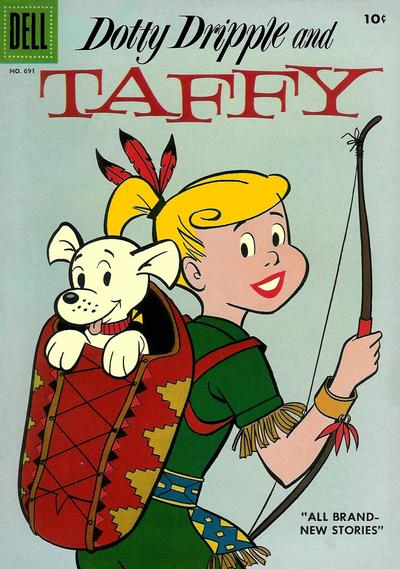 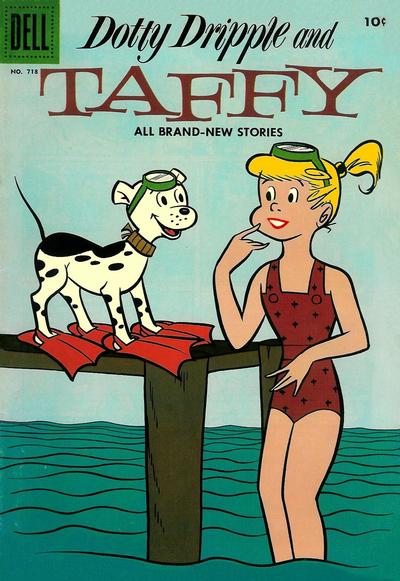 Kermit and the get along gang on the same cover. 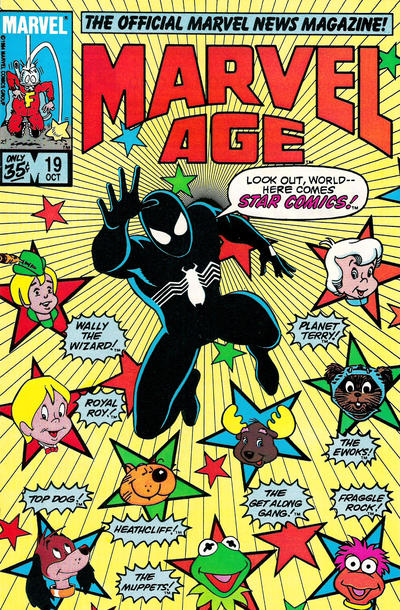 I've never heard of Dotty Dripple & Taffy .. but it certainly looks like the sort of comics I enjoyed, as a kid (and even now!).

I've always been fond of Ponytail, a similar 'comic-book-based-on-a-newspaper-comic-strip' .. which often featured cover art and even entire stories drawn by Lee Holley, the Ponytail newspaper strip's creator (somewhat unusual, for newsstand comic books of this type .. they tended to employ uncredited 'ghost' artists).
. .
Although it was never collected in newsstand 'comic books' (to my knowledge), I was also an avid reader of the similar long-running newspaper strip Emmy Lou by Marty Links. I have a few paperback book collections of it. .
Another title from this genre deserving of mention -- though it doesn't quite fit the purposes of this thread, since it wasn't based on a 'pre-existing' film/TV/comic work -- is Thirteen Going On Eighteen, by John Stanley (of Little Lulu fame).

Drawn & Quarterly published a beautiful hardcover which collects 9 issues of this comic book .. and it's just a joy to read. 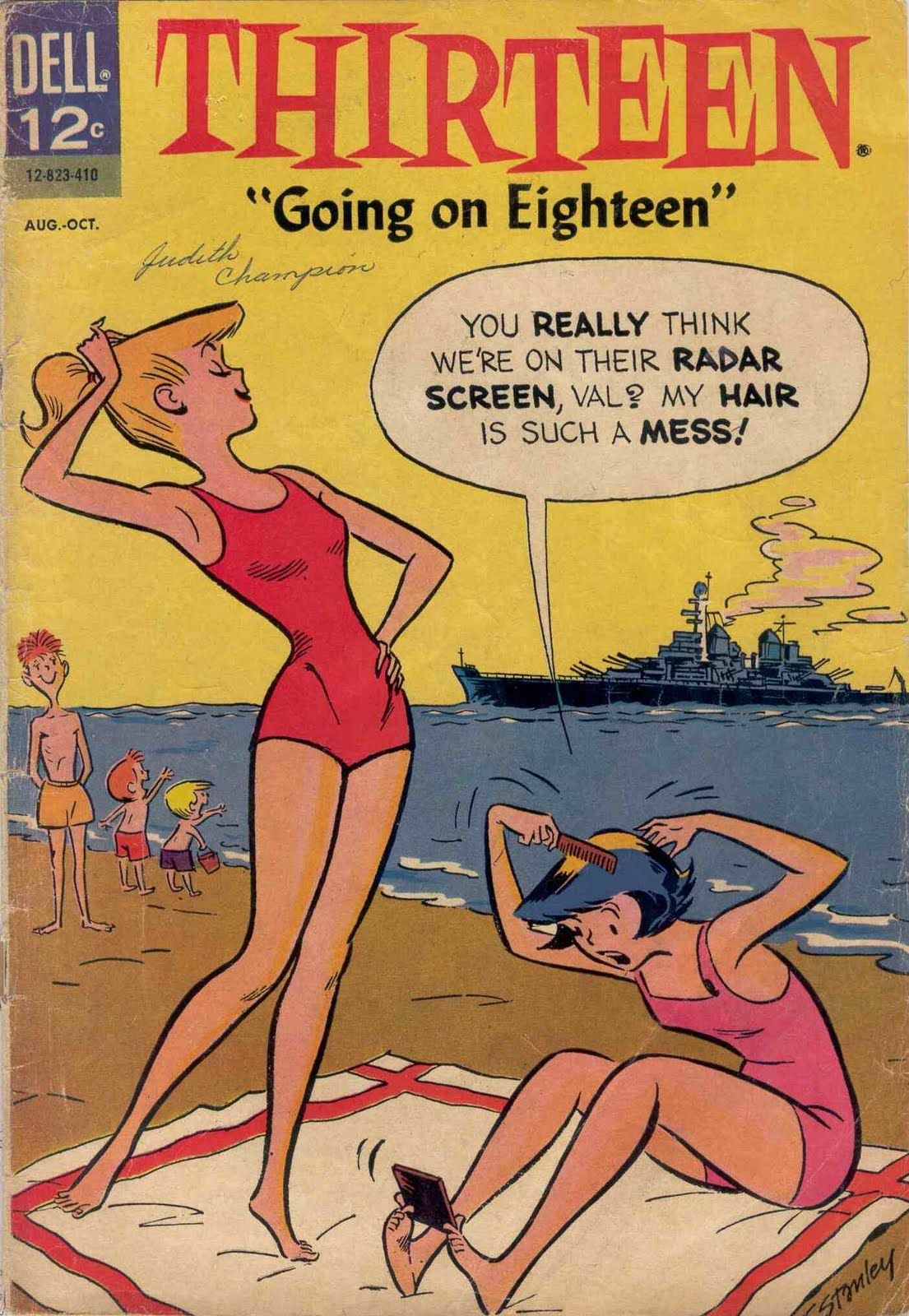 Here is one of the comic strips.

It had spin off titles also. 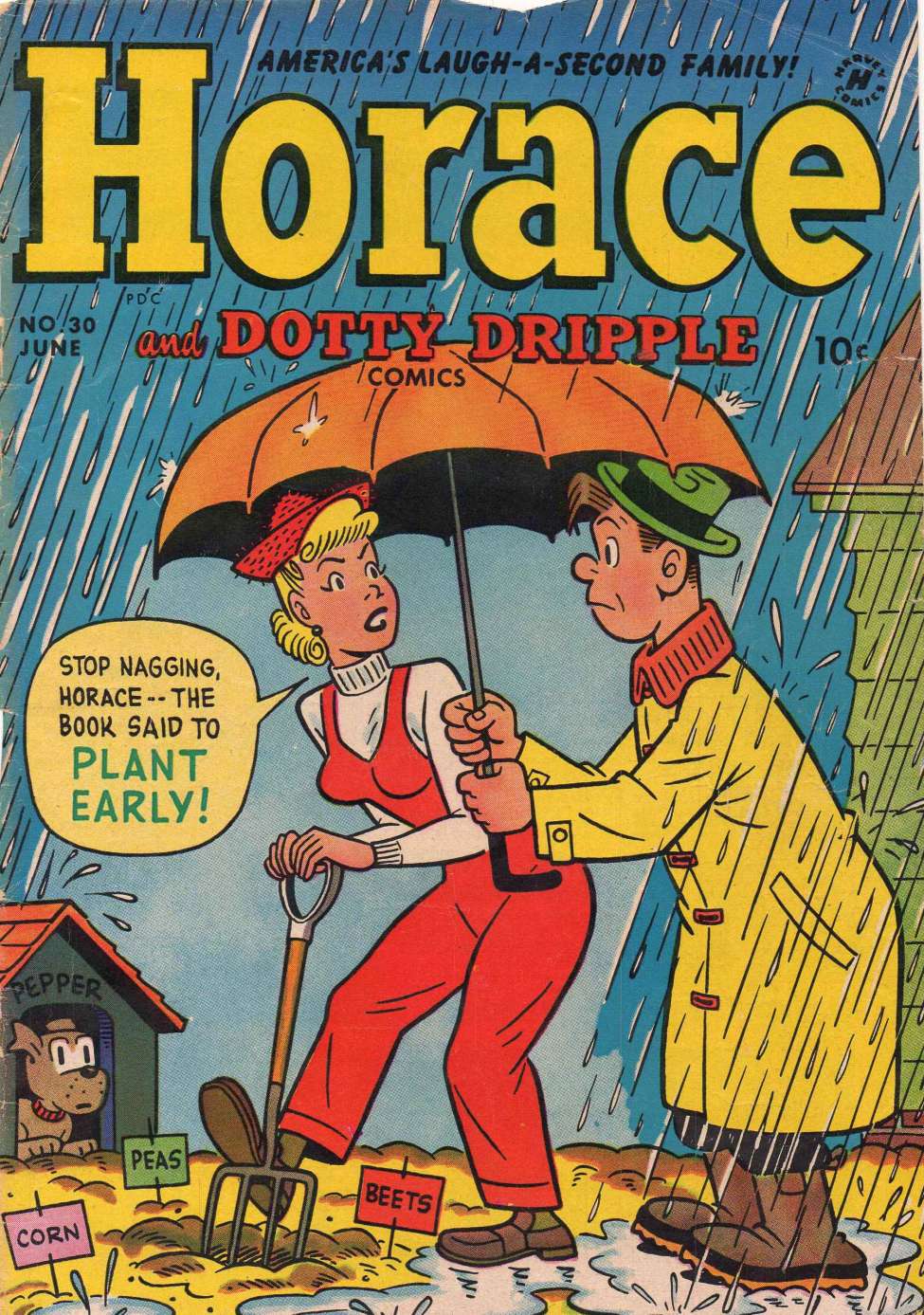 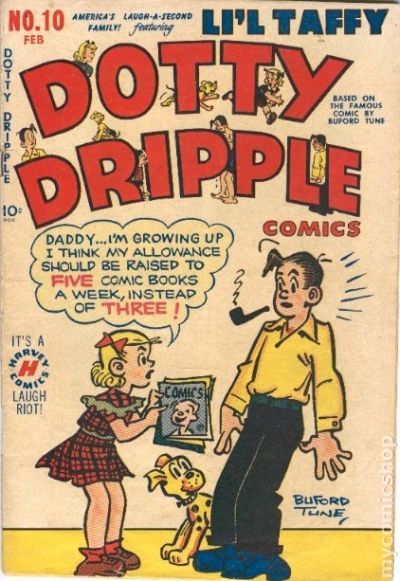 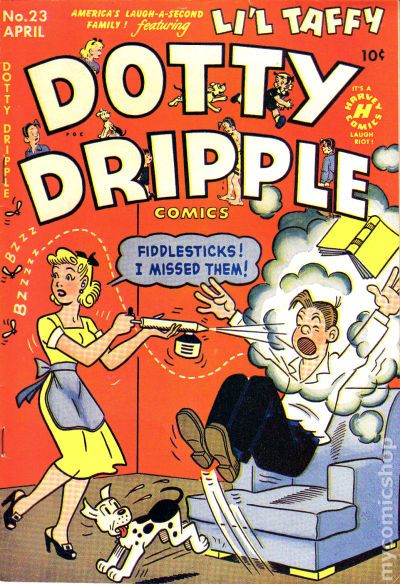 It was liked for its time. Today no one remembers it.
Top

Marvel Age--I remember that: Wasn't a comic, but a magazine of upcoming news/promotions, and a few previews of comix-to-come.

And a rare chance to see Richie Rich's three undeclared illegitimate brothers, Wally the Wizard, Planet Terry, and Royal Roy, whose identical resemblance to Richie spared the need for any verifying DNA tests.
(But we don't know what happened to them, so one of them probably died and became Casper...)

And royal roy was created by one of the richie rich creators. And marvel got threatened with a lawsuit over it killing the comic by issue 6!


Sadly, in some eyes, that may not having been enough to differentiate Royal Roy from Richie Rich. Indeed, spoilsport Harvey Comics sued Marvel for copyright infringement. Marvel cancelled poor Roy after 6 months, Harvey dropped the lawsuit and starting publishing Richie Rich again after a four year hiatus.

Ironic thing is harvey brought richie rick back after this so roy brought back richie!


Planet terry was fun. Read it when i was younger. It's also canon with the marvel universe. A adult terry even teamed up with drax the destroyer. 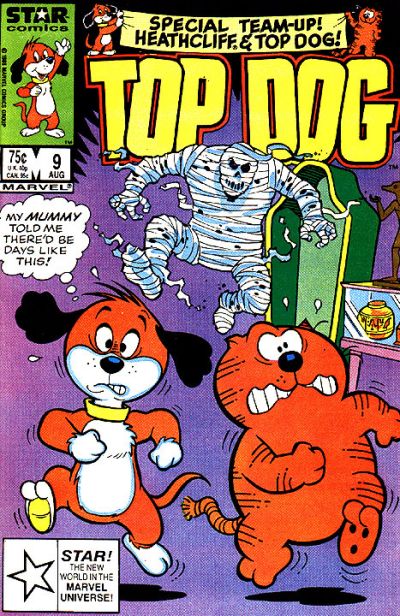 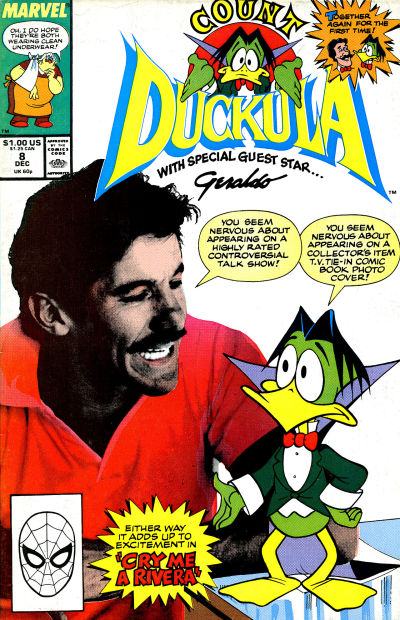 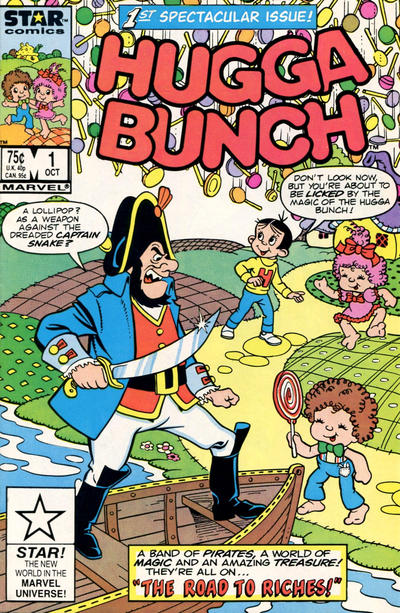 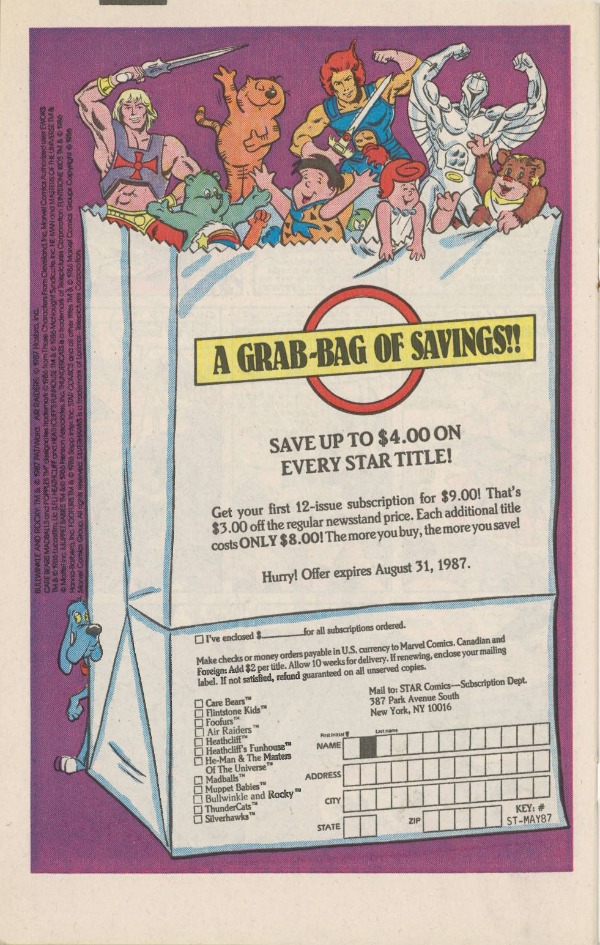 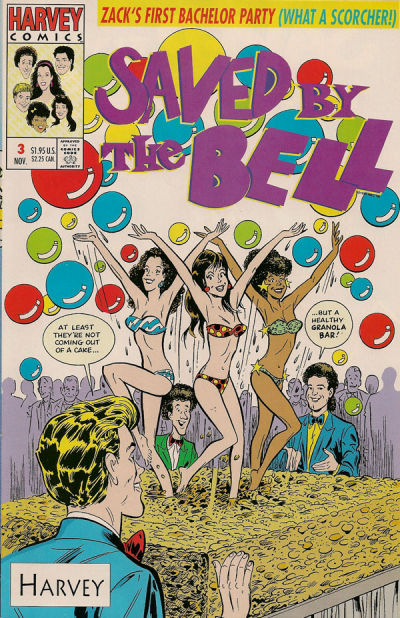 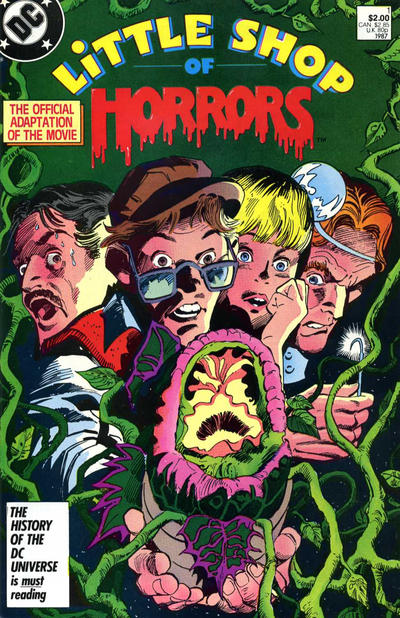 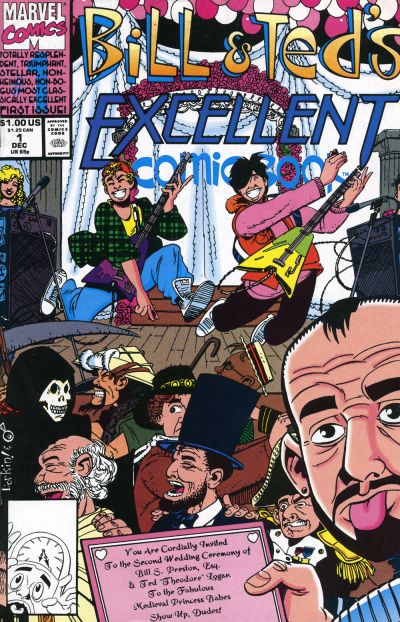 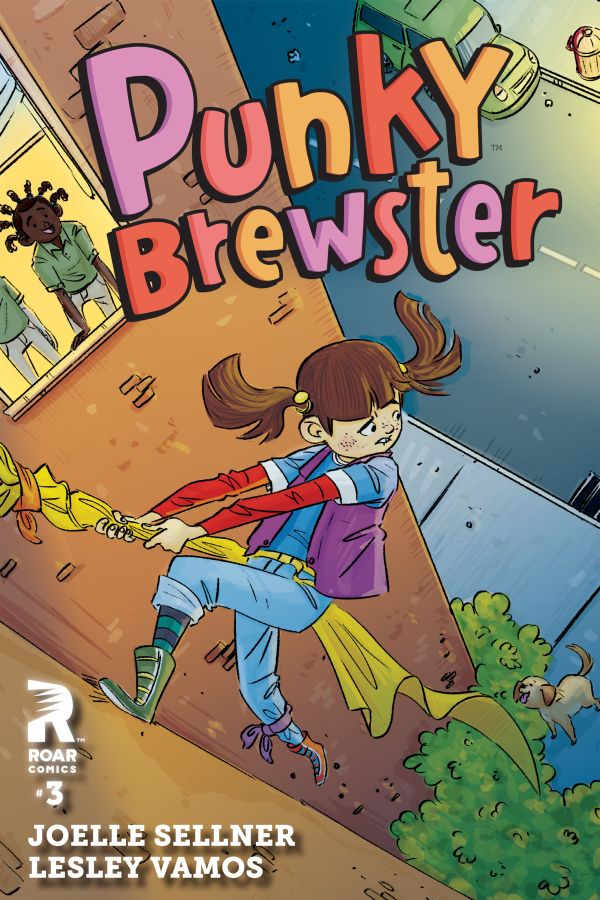 Gosh, didn’t know about the Little Shop comic. That’s u-g-l-y, and totally non-representative of the movie characters, most like a likeness issue. As a comics translation of the original Corman movie, I could see how you could end up with a straight, actual horror version, but that’s not the movie musical at all! Even as an uberfan and being intrigued to find out about this, I don’t want to see it!

And the same will Bill & Ted. It's a *comedy*! I know that rough-edge, hyper-shadow look was all the rage I’m certain comic adaptations of the 90s, but you can see the disparity in the tone right on this cover, between the detailed "live-action" look and a more comic-comic approach (something the Bell and Brewster books have nailed down a little better). Both are pretty ugly.
Top

Bill and teds art was expected as the milk and cheese creator did it and he always draws that way. 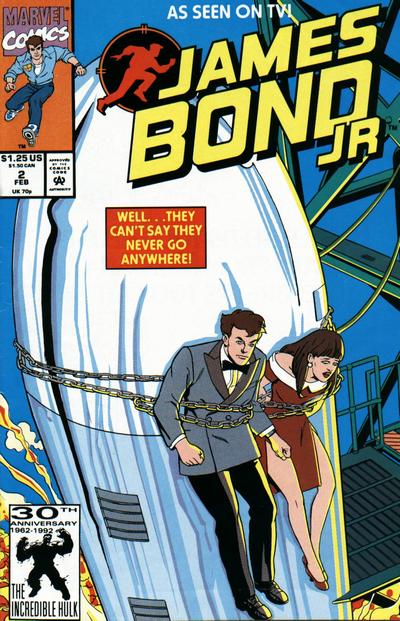 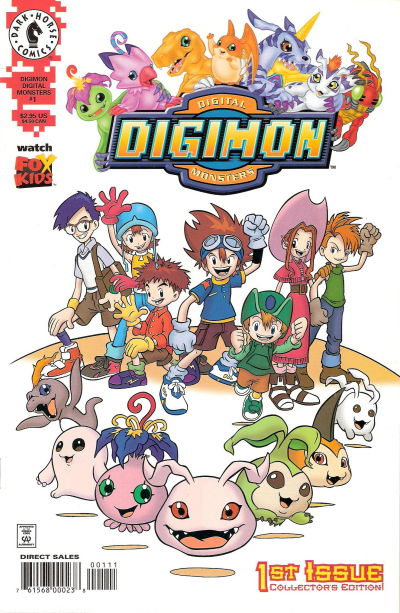 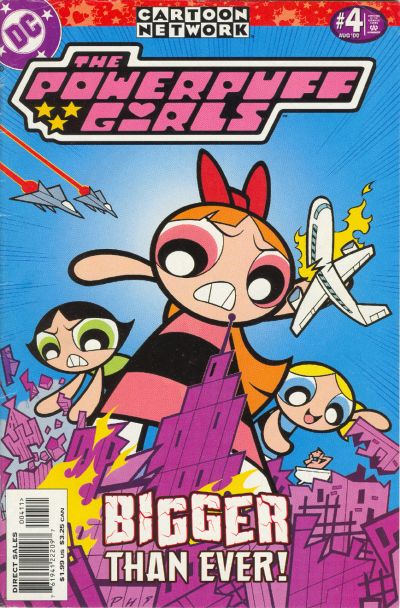 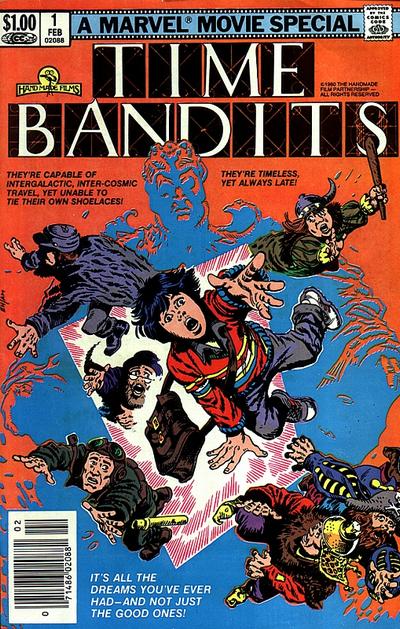 Wow…Time Bandits. Literally everything everywhere did get a comic, didn’t it!?
Top 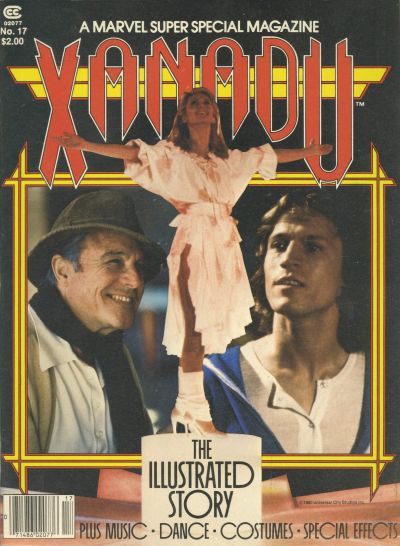 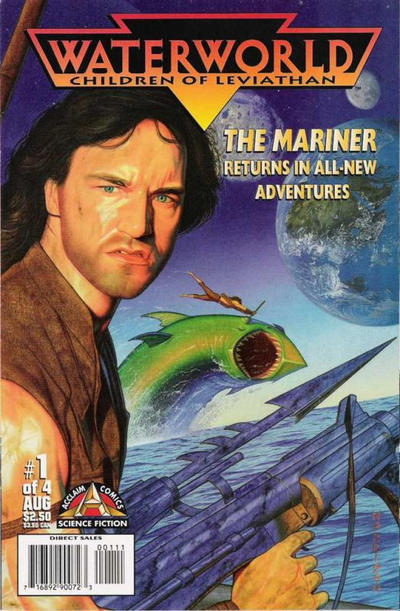 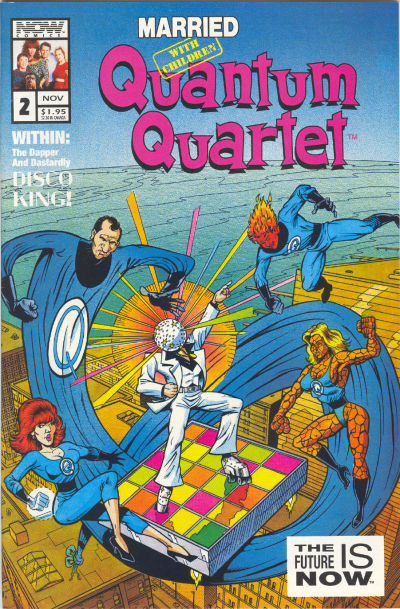 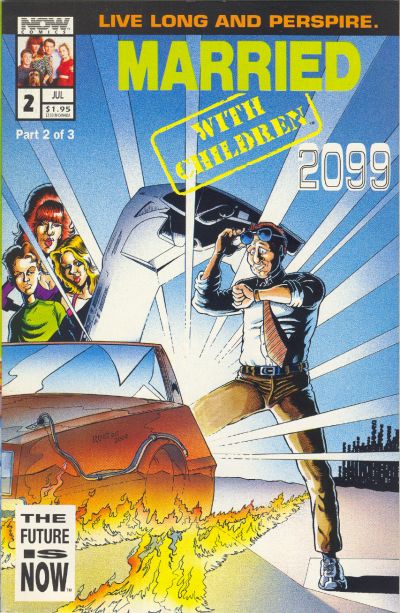