Just saw the restored version last week on TCM channel, and I must say that by todays standards it's a boring film. But back in '27 or 28, this must have been a rocking epic for sure.

I did manage to sit through the whole thing without nodding off.
Top

Ahh, well I'm always interested in originals, and am pretty good at "forgetting" that such things have come along and ripped off the concepts in the meantime, so maybe I'll give Dirty Pair a go on those credentials.

Funny you mention Aliens, Droo. Big reveal: I've never sat and watched that all the way through in one go until about two months ago. I've seen most of it on and off, but I made a concerted effort not to get distracted...so think of that as a proper "first time" viewing. And I thought it was pretty good, and I was able to put myself back into 1986 and see it with those eyes, so the clichés didn't really jump out at me, even though I thought the story was absolutely full of holes.

Well you can't say that about every film that comes out now, so I'd say it still holds its magic.

Well, George was kidding--Gunbuster's solid cliche', but it's good cliche'...More old than classic, though.

Re: OMG! I can't believe they found this!

'Tis a matter of opinion. Maybe it's just because most of us here are cinephiles, but there's something about the film that continues to draw us in. For me it's many things. The scenery, the visual effects, the over-exaggerated acting (I know it's necessary for a silent film but it always amuses me

), and just the overall epic feel of the film. It may not be the 1920's, but as Ben said the film still manages to retain its magic for many of us today.
Top

December 3, 2010 – Marin County, CA - Indo-Canadian Raj Ramayya may not be a household Rock Star name to a wide swath of the American populace, but to Japanese music fans and ardent stateside aficionados of Japanese Anime, he’s an admired, revered, and respected singer and songwriter, as well as film, television and video game soundtrack composer.

Raj’s gift for composition, melody and captivating hooks, combined with a voice so alluring his fans have exclaimed, “I want to marry it and have its babies,” makes him one of the most – if not only – in-demand music composer on the Tokyo music scene who resides in Marin.

Raj is the instantly recognizable vocalist on classic Anime theme songs, “Ask DNA,” from the legendary Cowboy Bebop, “Strangers” from Wolf’s Rain, and “Heroes Never Die” from the video game Biohazard, to name only a few. Other credits attributed to his ‘pipes’ include the Japanese hit single, “Strawberry Rainbow,” one of the fastest selling download singles on iTunes Japan, from dance duo, Studio Apartment. Raj also co-wrote and sings the theme song to the hit Japanese animated program, The World of Golden Eggs – which has sold over 1 million DVD copies in Japan – and he recently co-wrote and sung three theme songs for Little Charo, a smash Japanese children’s program, in where he also appears as a voice actor, as he’s also fluent in Japanese, for the lead character, Duma.

When not composing for the next “Big Thing in Japan” animated epic, television commercial jingles for corporate clients Sony, Honda, Nissan, Sapporo, Toshiba and Ashai to name only a few, or making personal appearances at numerous Anime festivals throughout the United States, where’s he’s greeted as Rock Star Royalty, Raj is one half of The Beautiful Losers, an all original San Francisco Bay Area-based Pop/Rock outfit, with longtime songwriting partner and guitarist, Brett Boyd.

Brett, also a respected and sought-after songwriter for Japanese multi-million seller punk rock icons like Ken Yokoyama and Hi Standard, and Raj formed The Beautiful Losers in Japan in 2001, and recently released their third full-length CD release, Four Corners of a Tiny Planet.

The Beautiful Losers, who will be performing throughout the San Francisco Bay Area in November and December, have relentlessly toured and performed in support of major acts, such as Coldplay, Indigo Girls, and Matt Nathanson, and enjoy high-profile song placements in MTV reality programs including Real Life Stories, Two-A-Days, and Parental Control.

And Raj guarantees, “Count on hearing some of your classic Anime theme song favorites.”

The Beautiful Losers’ Confirmed Fall and Winter 2010 Show Dates are below. 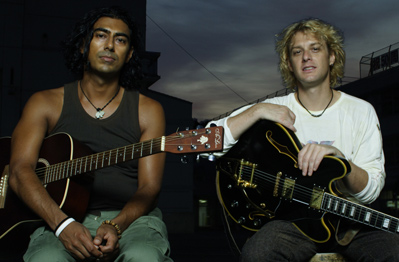 I've gotta admit -- I was ANNOYED and perplexed by this post.

This new 'poster' shows up unannounced and he's just plugging a friggin' CD!

This IS advertising and SPAMMING!

People complain about some of my posts but I'm not trying to sell anything or post adware.

C'mon guys, this is happening more often on the forum boards than ever...!

Please Ben, Rand, and James -- can we get rid of this crap?

Consider it a Birthday/X-Mas present for the members who AREN'T registering to try to sell stuff here or talk about Friends, American Idol results, or The Biggest Loser?

Seriously, this wave of new Spam is really annoying!
Top

Actually, George, this was an item that was sent into us for posting in the News column that we never got to. Not strictly animation related per se, but when they posted here (it's just a press release, and I have already removed some other information) I didn't mind so much since it did have a valid anime connection.

So we didn't take it as spam, though it has to be said: you waited eleven days before bringing this up!? And with a little too much venom for, basically, what it is?

But...I'm holding you to the Trek promise!
Top

Coming to theaters in Japan in January 2018 .. and, presumably, to (japanese) Blu-ray & DVD by mid-Spring.
Top

Not really my cup of tea, but impressive visuals in there for sure.

Granted .. Mazinger-Z is a bit of an acquired taste; the original TV show is rather infamous for its cheap 're-used' animation, repetitive 'fight-of-the-week' stories & over-the-top cheesiness.

I saw bits & pieces of the show when I was a kid (my father was stationed in Japan while in the USAF), and none of that bothered me back then, at all; the fact that it was in japanese didn't even matter .. it was giant robots fighting each other!!

I bought the complete TV series on DVD (the set in the linked review, above) about a year ago, though .. and found that it's a tough series to 'binge-watch', because each episode really is just the same story, over & over.

Mazinger-Z Infinity seems it will tackle that issue head-on, by going the Touchstone Dick Tracy route: having Mazinger-Z battle all the villains, in one movie..!