Hey guys! Be sure to check out our extensive write-up of our experiences at the con. There's a bunch of great pictures too!

It was well worth the wait! Simply captivating. I like the way you guys wrote the article, with each person giving their own take and so on. And great pictures, guys! Cool seeing some famous people, like Jerry Beck. And seeing your families.

I think you guys reached your goal, I really did feel like I was there.

BTW Rand, I neglected to mention this earlier, but you look a lot like your avatar. Very cool.

Well, I drew that avatar a few years ago, when I had more hair and was a few pounds heavier. But thanks! Maybe I should draw another one now!

And, nice to hear people are enjoying the article, even if it kept us from adding other content, more animated content, as we worked on it. I'll start having new reviews up tonight.
Top

Oh, I didn't know you drew it! I thought it was an avatar you found, based on a celeb that made a guest appearence on the show - albeit I was never able to place the character, so I should've guessed. It really does like a celebrity, though. You're very artistic!
Top

Great article, guys! Even I got a mention - thanks Ben!

I really wish I could have attended more animation related stuff while at the Con, but it was difficult to "mix business and pleasure," if you know what I mean.

Admittedly, it's still a bit difficult to find Blu-ray Disc information from the studios since it's still such a new format. It was worth it to meet up with everyone and talk in person about website issues, though.

Looks like you guys really had a great time! It was a pleasure running into to you at the Con! ^_^
Top

Thanks to all who are enjoying the article...perhaps self indulgent of us but, hey, we like to think of ourselves as one big family and it's always nice to know what the others are getting up to, right?


Daniel wrote:I like the way you guys wrote the article, with each person giving their own take and so on.

Thanks Dan! Actually we three all wrote our own accounts and the plan was to present our takes individually. But we'd have then had to have decided who went first, etc, and which was the "fuller" take on which to lead. I was also worried that by the end of reading account #2, the third one would be simply skipped, as we had a lot of crossover. So I suggested breaking up each day into our three takes, where we would mix them around a bit more. But then, as I started doing that, something told me to jump from each experience to each different take. And that's what we have: after the first "intro" bit, which is more set-up than anything else, I went for a "conversational" tone. With a bit of snipping and bending of sentences, I felt it actually sounds like we're all in a room, reminiscing on our trip instead of three individually written accounts written thousands of miles apart!

That you said it made you feel "like you were there" is fantastic - I think that was our intention, certainly mine, to give those that couldn't make it a real flavor of the whole event.

Lindsay! Yep, great to meet up, and I agree on the Blu-ray info. Even most "official" sites aren't the most forthcoming. And it's a shame, since there's a real niche there to start covering everything Blu-ray from the outset of the format's inception and keeping supporters and newbies up to date on the progressions.

About the best there is out there is www.blu-ray.com (to which Lindsay actually does contribute now), which gives straight-fact, no-frills info in a very solid way (not so far off how we present our reviews in fact) and is a recommended read for those making the Blu-plunge.

It was a great surprise and pleasure bumping into you Lindsay and I sincerely hope to keep in touch!
Top

What is Torch Tiger?

We just finished up work on our new anthology and will have it ready for comic Con 2009! Booth 2302!
Check out http://www.torchtiger.blogspot.com for more info! 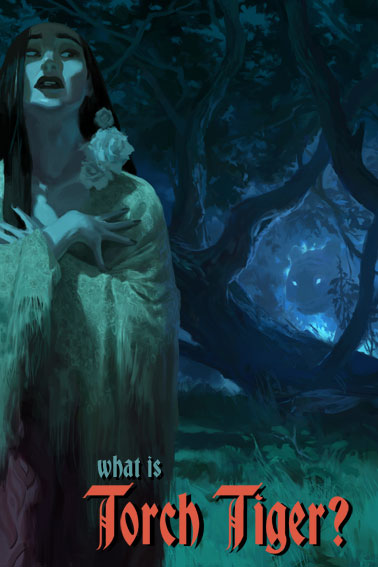 "What is Torch Tiger?" is a graphic novel anthology being self-published by Walt Disney Animation Studio's Story Artists and Directors.
It's an all-ages book in which every artist answers the question: "What is Torch Tiger?"
It will be sold exclusively at booth 2302 in San Diego (http://www.comic-con.org/) and is a limited edition of 1300 copies.

The 40th annual San Diego Comic-Con is just a month away ..

I'll be there on Thursday, July 23rd .. gonna do my usual 'sketchbook circuit', and check out what few panels and displays I can get near.

Anyone else here have plans to attend..?

I wish. If I lived in Southern Cal, I'd be there every year. As it is, it'll likely be an every-five-years jaunt for me. But have a great time!

I was very happy with the guests I got to see or even meet last year--- Jerry Robinson, Neal Adams, Noel Neill, Ralph Bakshi, Ruby & Spears, Ray Bradbury, etc. Anyone you're hoping to see this year?
Top

I am blessed with two good fortunes: living relatively nearby (just a three-hour train ride away) and working within the film/television industry (which qualifies me for a 'Professional' badge, granting me admission at no charge).

Generally, though, as I said, I only attend one day per year; usually Thursday, since it is less-crowded than Friday & Saturday.

This means I miss out on a lot of the bigger events & panels .. but my main reason for going is to purchase sketchbooks and prints from some of my favorite artists, many of which have 'super-low' print runs, and thus are only available at the Con.

The artists I like tend to have tables which are sprinkled throughout the dealer's room/exhibit hall, so it can take most of a day to gather them all. I make certain to visit Dean Yeagle, Chris Sanders, Bill Presing, Amy Mebberson, Laurie Breitkreuz, Frank Cho, Scott Shaw!, Sergio Aragones .. among several others.

I know about half of those artists, Droo.

I had actually planned on going to SDCC this year but it didn't pan out because of finances and the economy... <Sigh> Maybe next year!

Anyhow, Dean Yeagle generally has his stuff up for sale on his site or at BudPlant so I wouldn't call his stuff limited run. I've still gotta get caught up on his Mandy stuff and I would love to get the tribute book with all the other Many interpretations by other artists! I consider myself foresighted in getting the original Mandy statue from Electric Tiki. It's a better design than what's being planned next IMHO.

The other guys, yes, they're very limited runs... Especially some of the guys it's hard to get anything from like Bruce Timm and J. Scott Campbell. It's ridiculous how expensive their stuff gets outside of SDCC!

I'm content with the guys who DON'T limit themselves to SDCC and have stuff available through other (re: cheaper!) outlets.

StuartNG, btw, is a good guy to get stuff from if you can't get to SDCC.

E-Bay is the last resort and basically futile for a bunch of sketchbooks. It's amazing what some peopl think others will pay -- and also crazy what people WILL pay for something that was printed at Kinko's!
Top

I wasn't feeling too bad about missing Comic-Con this year, until I read about the Farscape panel. I'd love to see Brian Henson. Darn.
Top

I remember a few years ago when Disney bought the Muppets, some website sold t-shirts that said "Hey Brian, your dad wants his name back!" Disney hasn't done much with the Muppets, but Brian wasn't doing much with them either at the time they were sold.
The Official Lugofilm Ltd Youtube Channel: http://www.youtube.com/user/bartsimpson83
Top

And now Miyazaki's going to Comic-Con! Dang! I'd love to go to that panel too.