“How to Train Your Dragon: The Hidden World”


Frozen 2 and lion king got shut out but frozen 2 did get a best song nod.

“I’m Standing With You,” from “Breakthrough”

“Into the Unknown,” from “Frozen II”

“I Can’t Let You Throw Yourself Away,” from “Toy Story 4”

Shame anime films are still treated like crap (they pass on anime films that would get best picture nods if they were American live action films but they are anime so they snub their noses at them!)


Sidenote joker got 11 nods including best picture, director and actor and avengers got best fx and star wars got 3 nods. Spidey got shut out!
Top

The Lion King wasn't submitted for BFA, but I have no idea how Frozen II got snubbed in that category since its nomination was almost considered a certainty. And once again, Randy Newman gets nominated for a song that isn't up there with his best work (I mean, it's fine for what it is, but it's basically a one joke song as it's about stopping Forky from essentially killing himself).

But hey, at least we have "I Lost My Body" in the "obscure film no one has heard of which has no chance of winning" category, I guess.
"Yesterday is history, tomorrow is a mystery, but today is a gift--that is why it's called the present."
Top

And Newman gets a best score nod too? I found his music for Marriage Story absolutely *swamped* the movie in trickly, treacly saccharine that was way too reminiscent of several moments throughout the Toy Story scores.

Is it me, or are all these noms this year too predictable and for, ultimately, only so-so movies? For once I’ve actually seen a good portion of everything this year, and I haven’t been really overwhelmed by anything that’s got the big nods.

Joker? It was fine, but nowhere near as violent as I needed it to be to really work. Glad that De Niro didn’t get a nom for this, since he was *terrible* in it. And Arthur was nuts to start with, so the slide into madness was already tipped. And why try and shoehorn in the future Batman reference and not do it very well? It feels a little unbalanced with Joker gets a lot of kudos for doing what Maleficent did a few years back, albeit for a different audience. But the mechanics were largely the same.

Judy? I couldn’t get past Renee Zellweger and her box of tricks. I met and was charmed by her years ago and have followed her since, so I’ve seen pretty much all she has done...and sadly she never really broke through the makeup or really even embodied Garland fully, leaving me to just see Renee herself in the way she moved and inflected her dialogue.

1917 looks like the one to beat now, which I haven’t seen, but for a film that gives the illusion of "one shot" (though not one take) it amuses me that the big clip that they’re showing all the time (at least here) has one of the absolute *worse* wipes between the two takes: two walking characters go behind some trees, but their speed and total intonation changes by the time they come out, just like they’ve taken a break between setups and got some energy back. It’s also not helped by their placement, which isn’t consistent between takes. As I say, I haven’t seen the film, and I’m actually looking forward to and wish it well, but it’s just odd that the whole "look how we did this" publicity is let down by this one highlighted clip.

Which kind of goes against 1917 for winning VFX, though again I would hope The Irishman doesn’t win, since the de-aging wasn’t a patch on what Marvel has previously achieved, while Endgame and Lion King are maybe a bit too obvious. As is Star Wars, though I’d be good with that, since they managed to pull off soooo much in a relatively short amount of time, and did it pretty well. And I really, really hope that it wins Score for John Williams, who deserves one last award, and for his signature series too.

Short and Feature are more interesting this year, though. I need to see Klaus and Missing Link, but I’m thinking it’ll go to Link, while Kitbull seems to be the one to beat for short. I was a little shocked by Dragon 3's nom, as again I found it okay and a decent series capper, but it really was more of the same and neither sequel surprised as much as that first film. Which kind of sums up a lot of feeling toward many of the films this year: there’s a lot of much better, decent work that’s out there and been overlooked in favour of what can only be called "the usual stuff"...
Top

Klaus and Missing Link were my two favorite animated features of 2019. I'm happy to see them both nominated .. and would be good with either of them winning.

TS4 and/or HTTYD3 probably have better odds, though.
Top

I have Missing Link sitting by the player ready to watch and I guess I should now watch Klaus on Netflix, even though Christmas is over. I'm kinda happy that Frozen II didn't get a nom. Really surprised that Newman's Toy Story song got a nom but thrilled Beyoncé's name didn't help that terrible Lion King song get a nom. I hope Williams gets the little gold man for his life's work on Star Wars.
Top

I actually think Klaus has good odds, for being hand-animated, as well as Link, for also being "old-school" and having already picked up some noms and awards. If anything, the easy vote goes to TS4, but also that it’s the fourth film leans against it somewhat, especially with Link's growing presence.

Newman's been nominated because by now it’s kind of routine, and many people have probably forgotten he did actually already win an Oscar (and for far from his best work!). For the same reason he’s got a score nod, though I can’t understand why since his over the top strings murdered any real life feel from Marriage Story.

Surprised that Speechless didn’t get a nod, though also pleased that the LK song didn’t get a mention, since that was clear Oscar bait. I hope it goes to Elton, to give Rocketman *some*thing after losing out everywhere else, particularly Taron's performance.
Top

Blech. What a weak year, when films like that are getting noms. And I would have gone for Frozen II over either of those barely-warmed-over retreads.

Overall, I'd vote for Missing Link, though Klaus was also very good.

And add my vote for Williams, not only as a career-topper, but because the Star Wars score was really very good!
Top

Well .. I have such a poor track record, with the A-V Oscar contest .. that I can't help but feel that simply the fact I liked both Klaus & Missing Link somehow lessens their chances.

While I don't think Dragon 3 is the best of the trilogy I must admit that the ending was very satisfying. Well the ending and the epilogue. But I admit my judgment is probably clouded from very personal reasons to the story as a whole and what it meant to me.

And since Disney needs a nod every year, I am glad TS4 got it over F2. Both were unneccesary but TS4 was more satisfying for me, I at least didn't walk out feeling disappointed.
Top

Beyoncé being snubbed made my day. "Spirit" doesn't deserve an award, much less a nomination. Simply terrible. It just doesn't belong!
Top 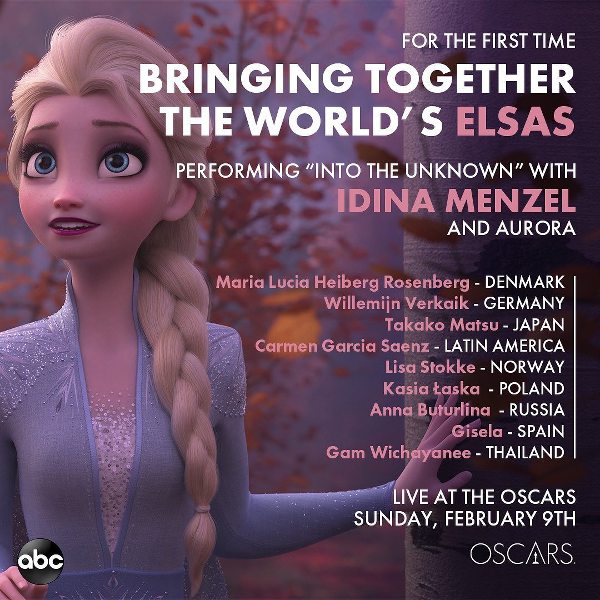 That should be fun! Neat idea.
Top

This is one way to try and make the song memorable. The big question is will we get a true multi-lingual presentation of are they just gonna be a glorified choir.
Top

One would hope the former! This gives an idea of how it might sound: (minus a few languages!)

I never tire of those Lugia vibes!

Pretty darn good performance overall. Aurora though, wow! Notice how she joins them at the end.