Proving again that audiences want to see big new films on big screens as they should be!

Let films be cinema exclusives for one or two months, then go streaming/video.
Top

So this seemed to have come and gone quickly…!?

We watched at the weekend — actually a really fun "trip" to the cinema in a rare afternoon sitting, which is often my favorite time to watch a film — and I really want to say that I loved it, but can’t quite bring myself there.

The story was fun, and the 1950s style Italian visuals felt authentic to what I know of the region, while the coming of age aspects were handled well within the framework of the tail (!) they were telling, even being somewhat buried until the ending, where what happens happens perhaps a little too quickly and then we realise what we’ve actually been watching all along. And this, for me, was where Luca suddenly felt most at home within the legacy of Italian cinema, and the feeling those films can give.

But…and it’s a big but…the rest of the film never felt that authentic to me, and it’s down to the voices.

Now, I’m a fan (Tremblay), and not so much of a fan, of a lot of the vocal cast in Luca, but *none* of the voices jumped out at me as being someone recognisable, or pulling me out of the picture by being overbearingly obvious in who they were. Yes, even Baron Cohen, who has a fun moment, and Rudolph, who I usually otherwise can’t stand. But, for me, the whole thing was swamped by a complete lack of real *Italian* (or at least Italian accented) voices. So overbearing were the standard mid-American or west coast voices, that they felt totally out of place in this otherwise lovingly crafted, presented, and often very real Italian coastal world.

From memory, we get only two accented vocals: Giulia's father, almost a stereotype but very warm with it, and the bad guy, who is *very* stereotypical and almost too far the other way with it so as to become slightly annoying, and not for the reasons the story wants us to be annoyed with him for. Given that the film goes so far as to "presenta" Italian credits onscreen, I just felt that the rest of the strongly American-accented cast, as perfectly fine as they are, kind of killed the mood for me, especially the loud and brash Giulia (although I guess we kind of now know who Ellie from Up used to hang out with before moving near Carl's house!).

Other than all that, Luca largely works, and certainly deserves a place at the Pixar table, if not quite the top table. The look is lovely, the story is a different kind of treat with several really nice touches, and overall breaks away enough from the usual Pixar feel to feel fresh, while still totally belonging in that Pixar world due to its gags and heart. My 1080 Disney+ stream (must get an AppleTV device at somepoint!) didn’t quite do the visuals enough justice, so I look forward to seeing this again on disc in a few months, caveats with the voice cast aside.
Top

Did luca get released before june 15? If it did it's safe for oscars.

Re: Non-Italian voices: Very fair point. Though, for me, my thought is that most Italians, certainly of that era, would not speak Italian-accented English to one another anyway. They just spoke Italian. So, to be fully authentic, they would speak Italian in the film, and we'd be reading Italian subtitles. Also, the Sea Monster folk aren't actually Italian anyway, so it shouldn't matter at all in that sense. But I do understand your point, and realize that they are not following the normal film convention. But it didn't bother me.

Anime films are almost never dubbed in Japanese-accented voices. And, one can name many animated or live action films that take place in foreign countries but the actors speak in either American or British English. Maybe you would not have noticed so much in Luca if British actors were used?

(I do still find it funny that an Englishman was hired to play someone named Jean-Luc Picard, too! How did the French Trek fans feel about THAT piece of casting?)
Top

Well, obviously in the confines of this being an English language film set in Italy!!!

And, no, various voices never usually bother me. See Jonathan Taylor Thomas and basically everyone inappropriate in The Lion King. They are American features, so you’d expect American voices.

And of course the sea creatures are speaking whatever language the filmmakers want them to. Jen actually did bring this up: how did they know English/Italian, to which we just guessed that they picked it up being so close to the coast, and that some of them were already visiting the mainland covertly for years.

Which actually reminds me of a pint I wanted to make before, where these couple showed themselves: how cool would it have been for many, many more of the people to really be sea creatures? Once that started I thought that was going to play in and be a much bigger part of things, where prejudice *couldn't* be acted upon, as many years of friendships had already been established. That would have been good too.

But that the accent thing, or lack of them, doesn’t explain why the Dad and the bad guy *did* speak accented English! In these days where we are apparently trying to be more authentic to various cultures, I would have thought that Italian-accented characters, being Italian characters in an English language film, would have felt more authentic, especially as I said, given the use of Italian language in the titles and credits.

It's interesting what you say about Brit voices, since when Jeremie was over here he was astounded at the many accents and dialects that are perfectly normal to us here. Being English language, but sharing that with America and yet being so close to Europe, we get a real hodgepodge of everything, so any and all accents and dialects are "usual" to us. So I think that, even if they had been British voices, I’d have still been wondering where the Italians were in this Italian set story!
Top

It's funny, but Canada seems to have fewer accents, despite being vastly larger than the UK, and also quite a bit larger than the USA. Our small population is much more spread out, so one might expect a larger variety of accents. In the USA, it's easy to tell whether someone is from Mississippi versus California or Texas or New England. But people sound much the same here (aside from minor regional slang) whether they're from Vancouver, Saskatoon, or Toronto. (Though a few folks from rural centres in the Prairies may have more of a twang.) East Coast Maritimers do stand out more, and the "Newfies" of Newfoundland and Labrador do have their own version of English; but most of the country is relatively uniform, though I'm sure Henry Higgins would find much to distinguish.
Top

Randall wrote: ↑
July 1st, 2021, 9:33 am
(I do still find it funny that an Englishman was hired to play someone named Jean-Luc Picard, too! How did the French Trek fans feel about THAT piece of casting?)

Picard was originally envisioned on paper as an old experienced "continental European charmer", and then they forgot to write in any episodes about his past love life for the next few seasons.
And "ST: Insurrection" gutted most of the romantic subplots.

Luca comes to home video on August 3. Just a month away!
Top

re: Accents. As much as I adore Beauty and the Beast it will forever be odd that Lumiere and the Feather Duster have a French accent and no one else does. So it's the same issue that Luca has, either all locals should have some form of accent relevant to the country it is set in, or no one does.

Although Luca and BatB are not as odd as the amateur production of the BatB stage show I was in where Australians were required to put on an American accent and Lumiere still had his French accent. I never understood that directorial decision.
Top

Ultimately, they’re all American animated films, so it’s therefore natural that American voices would be the default.

"Personality characters" have always had some kind of separate vocal inflection (how come Snow White's Wicked Queen is British, when the head is also American? Or the Coachman in Pinocchio? Etc, etc, etc)… Animation, because it’s an unusual form where the vocalist doesn’t have to resemble the characters in any way, shape or form has always had these distinctions, where the default language is the country of origin, and those "personality characters" like Lumiere, Sebastian, etc, have their "own world" type of voice, usually being the only ones that actually "belong" in any certain film's setting.

My take on Luca was that the film otherwise seemed to want to get away from that and exactly be more authentic to its setting, which is why the usual broad American voices jarred more for me than usual, since they got everything else so right.
Top

Dominating in the streaming rankings. Nice to hear. It really is a nice simple little film. Really loved it the first time, but it grew on me more on a re-watch. Love the soundtrack.
Top 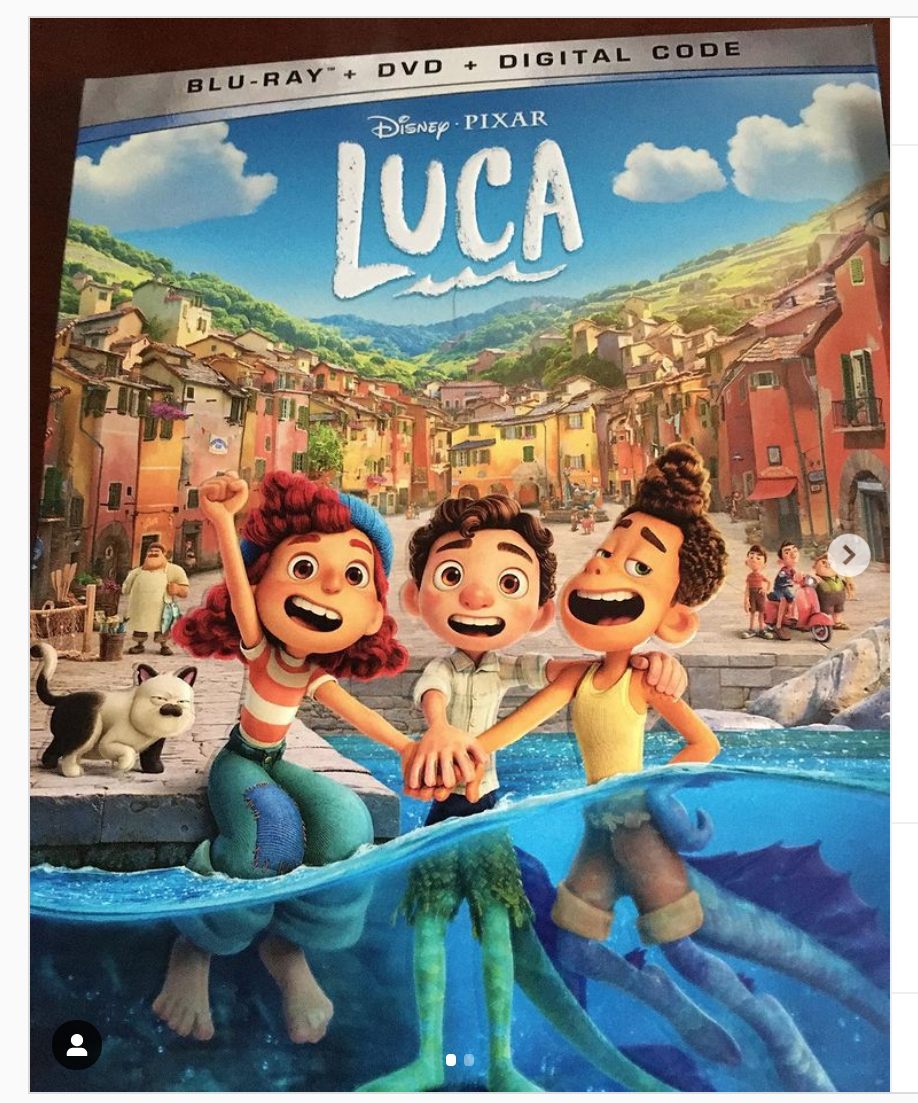 Poor placement/image decision on the steelbook. My favorite is the Walmart edition.
Top

I went with the Steelbook, as I often do. At least I can get that one locally in Canada.
Top
Post Reply
100 posts