I'm really getting peeved about this. I was ambivalent about the film before, but now that Batgirl in "canceled," I really regret not being given the chance to see it. And I'm very upset on behalf of the hundreds of folks who worked on it, only to see it get shelved as part of some unfathomable corporate strategy. If it makes sense on the corporate ledger, then that's the only place it does. Such a shame.
Top

Of course, it could have been another Catwoman…and we can’t unsee that one now, can we…?

But Catwoman didn't have Keaton's Batman or Simmons' Gordon. Or anything conecting it to Batman. Not that that automatically makes Batgirl better, but how could it not be? I just wish we could judge for ourselves.

Yes, there were there. We just didn’t see them.
Top

Turns out batman screening score that they killed batgirl over was a not that bad mid 60s. Same score shazam 2 got! In fact the it remake got the same score in screenings!

Yes, and that was with temp VFX and music!

Yeah, as I said, a month ago they were looking at beefing up the budget and making it theatrical! It just makes zero sense even with the tax angle.
Top

DC studios announced with alan horn coming on board.

Same time as they announced this ezra miller now has another child grooming claiming and a cult in iceland!

DiscussingFilm wrote:Adil El Arbi has shared a still of Leslie Grace’s Batgirl and Michael Keaton’s Batman from the set of the cancelled ‘BATGIRL’ film. 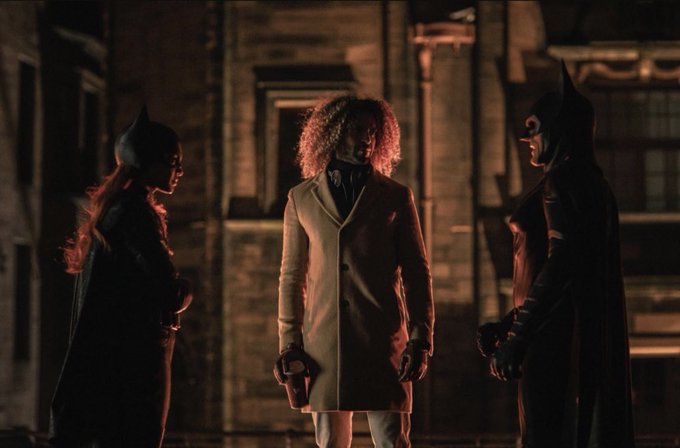 Smart Kev shows how to keep his Ms Marvel directors onside, knowing that support for them will carry over to their next MCU gig…
Top

Batgirl also had the same test score as black adam!

So, same score as it, black adam and shazam 2!

And, just about the same darn reason for Warner to make it in the first place.

If the new CEO's message was "Give it up, guys, it's not the 10's and even MCU is sinking, we're trying to run an actual corporation here, move on...", I heartily concur.
Top

While I think I understand from a purely business point of view the cancellation of Batgirl, easy tax write off to get money back after the sale of the parent company, it is still so odd to me. Sure they can claim they got money back from the tax write off so lost no money but its so bizarre they still spent $90 million to get money back. It's bizarre that the film is technically completed (same with Scoob 2) and they decide to cancel it. I just think of all the crap movies out there that still get some sort of release somewhere and somehow and yet this one will never see the light of day. I assume it can never see the light of day or else the tax man will hunt them down Liam Neeson style, even if the movie is quietly dumped on the home market in 10 years time. Was I excited for Batgirl? Not really. Would I have seen it in a cinema? Probably not - haven't seen a Batman related movie in the cinema since The Dark Knight. Would I have seen it on Australia's version of HBOMax - probably out of curiosity. I was more likely to check out Batgirl than Black Adam that's for sure.

I just don't understand why the decision wasn't made to release Batgirl and Scoob2 onto HBOMax since they were completed AND then cancel everything else in production, pre-production etc moving forward so the guy's great vision can occur. In hindsight, should have seen this coming with the way they cancelled all those Arrowverse shows this year on the CW (still dirty I don't get closure for Legends of Tomorrow). I worry about what this decision means for those DC shows that are technically still 'alive' - Stargirl, Doom Patrol, Titans etc. I'm anticipating they will get cancelled as well.

I also feel the CW will also disappear by the end of 2023 with the way this guy is chopping through Warner properties like Katzenberg holding a Black Cauldron print, only so Riverdale and The Flash can meet their contractual final season. I also think this is the start of the end of the golden age of streaming and soon we will be back to just a handful of providers like we were pre pandemic.
Top
Post Reply
1512 posts