Please, Once, don't give them any ideas.
The Official Lugofilm Ltd Youtube Channel: http://www.youtube.com/user/bartsimpson83
Top

Yes it was Watership Down. Amazing you were able to name the movie. I remember watching it when I was young in the 80s on TV. Can't wait to watch it again. Thank you again!!!!!!!!!!
Top

I regret to say that it's true, as they've already got a line of Thumper-themed books...
Top

Here's hoping you stick around these here forums. Perhaps you'd care to discuss the film once you have seen it again?

Man, I was just devestated by the uncut Plague Dogs. A great film, but not anything I'd want to watch just any old time. I don't know why, but having that "ambiguous" ending was much, much more powerful and sad to me than if it had just ended with everyone dead.
Top

I once tried to get my boyfriend to watch Plague Dogs with me, and he asked me to turn it off about halfway through, saying it was too depressing. And this was the CUT version!

It's not exactly a "feel good" film, but it's still a great one nonetheless.
Top

Getting the 4K treatment from BFI: (UK release, but if you're set up the 4K is region free)


Newly restored in 4K by the BFI and Silver Salt Restoration, using the original 35mm negative and stereo audio tracks, this landmark animation is presented in Ultra High Definition for the very first time. 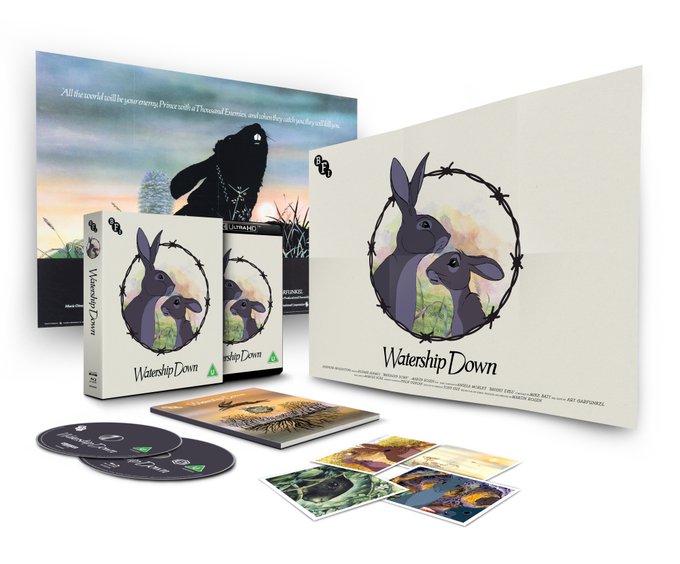 I wrote to Rand this week about this and said that it was such a shame Terry Rawlings didn’t see this edition come along as he could have given them so much never before seen or heard material over the same old extras we've had since the 25th anniversary DVD. That said, I’m naturally eager for this, though I just don’t get the barbed wire motif…this is like a scant non-existent thing in the film itself and is made way too much of a big, and actually quite ugly, thing on this new poster.

The film is said to come from the same source as the Criterion restoration, and why they didn’t save it a few months and brand it a 45th Anniversary Edition is also strange. But of course I’ll get it, and make it possibly the film I have most copies of across multiple formats…!
Top

A quick look shows, if combining formats, books and soundtracks, etc, then they come out just about equal. Tron is also up there, I think!

I know I first mentioned the Donnie Darko connection about sixteen years ago (!) but just thought it would be cool to finally post the actual scene.


*spoiler for WD*
You can’t just have your characters announce how they feel! That makes me feel angry!
Top