The Nightmare Before Christmas

has anyone seen a solid release date on this yet?
Top

Check the link above. It was announced at the end of May for August 26.
Top

No, I don't get it either.
Top 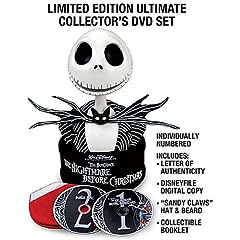 Pretty cool, but not enough to get personally. Amazon currently has it for pre-order at $125.99 and features more pics of the Jack Bust!
Top

Thank-goodness...a lot of cash I won't be laying out and I can get the Blu-ray without thinking twice.
Top

I don't know about any of you guys, but I really love the Blu ray cover for this movie. This is on of my favorite animated christmas movies.
[img]http://i42.photobucket.com/albums/e314/joris1/ecede288.jpg[/img]
Top

Our full review is finally up...just in time for All Hallow's Eve...!

They have tons of those limited edition Nightmare Before Christmas DVD sets still lying around all over Columbus. I bet they end up on sale online for 60-75% off before they're sold out.

It's just not worth $150 (nobody's selling it for $180) for an oversized bust of Jack Skellington.

By far the best-looking and most sensible release was the deluxe DVD release with the 3-D steel(?)-cover of Jack.

Oh the slipcase on the Blu-Ray cover has the same image embossed, but the DVD has by far the nicer case...

It was done for Iron Man!
Top

All mostly points I covered in the review George!

As I said, who's going to pay upwards of $140+ for that bust edition when the standard DVD looks so nice? Don't go looking for a decent BD box though...we know direct from Disney that what is out there is it. I believe they are going to give it another push for Christmas though...
Top

Who's gonna buy a deluxe edition now for Christmas?

I think everybody that wanted the Skellington bust has it now!

(FYI, all I'm asking Disney Home Video for is a neat 3-D release metal case like the DV edition had and what many people saw for the Iron Man DVD AND Blu-Ray releases. That's simple. Practically every other studio has done steel/metal cases for at least DVDs! Why's Disney being cheap on packaging all of a sudden?)

The economy is in a dumpster and I'm even asking people to be cheap on gifts this year! I think spending over $100 for one film on DVD is ridiculous.

I don't expect much from family members and I suspect that Jack Skellington is a luxury item most people can do without.

I've been thinking for a while that most of these deluxe statue/bust/toy exclusives are a joke! I see tons of them hanging around the aisles in the stores that stock them (Best Buy, FYE, etc.) and they don't seem to move.

I buy a lot of anime and have mostly been successful staying away from these ridiculously overpriced sets that T-shirts, manga, and other things I can live without. Especially when the regular DVD is over $30 cheaper!

I sometimes wonder if they studios know WHO they're sellling movies to???
Top

I just wish studios would make the deluxe packaging available on BDs...these are the audiences that was the best sound, pic, extras and packaging, and yet IF you want the fancy on the shelf look they only provide it for standard def DVD.

Precisely why I threw a hissy fit over the UK Sleeping Beauty only having the book with the DVD! BVHE morons!
Top

Sometimes Deluxe sets can be cool. There was a deluxe Spirited Away DVD that had a model of the bath house with it. I would have gotten it but it's rare now.