Now if andy grew up a little for the third movie, I'd love to see an older version of Molly.

Naturally, some toys would get shipped to her room making an interesting concept of the toys having to sneak between rooms to meet up.
And off course a lot of new toy characters.

Some more barbies, my little pony and what else girls like to play with

I don't know. Pixar films are very boy-centered. Even if Molly's like five or six in this film, I don't think she'd be in it a whole lot. I could be wrong, but that's how I see it.

Emily, Hannah, and Cindy (the girl who ended up owning Stinky Pete

) all got very minimal screen time in both TS films. I think this is partly due to the guy-centered plots but also the fact that aside from having tea parties and playing cowgirl in exactly the same way boys play with their cowboy dolls, Pixar guys don't seem to know very much at all about how girls really play with their dolls/toys.

Girls often play at being mommies, cooking, dressing up, "shopping", wearing fake jewlery, playing house, feeding their dolls with bottles, etc....Did they show anything like this?

(It wouldn't bother me as sexist--that IS how many girls play, that's just realistic. The only reason the Barbies bothered me was because they're sex objects seen from Ham, Mr. Potatohead and Slinky's POV AND THAT'S IT.

I mean a stewardess, girls in skimpy bathing suits playing volleyball and limboing? What is this, the Playboy mansion or something?

Going back to Slinky...how many other toys in the films have we seen that didn't get a line but you still feel great for having seen them?

Slinky could be there, interacting and all, but just not speak. Or they might have a line or two from outtakes that might fit.

There's no reason for Slinky not to be in there, but perhaps not playing as big a part as before.
Top

Yeah, I don't think Nintendo had 3d graphics until N64 came out!

Ever see the SNES version of the Toy Story game?? (the Sega version had slightly better graphics, but both were nearly in full 3D)

And don't forget that scene in the first film where we hear ""Hakuna Matata" playing in the Minivan. That means the story takes place at least by 1994 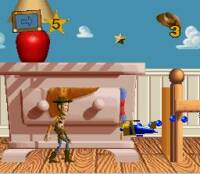 OMG, I had that game!

I only recently started to pay serious attention to video games, so I don't remember that one. It looks cool though.

The truth is that generally there haven't been a lot of good or accurate portrayals of little girls (from say 7-13) in animated OR live-action film.
One film I can think of that did a really good job was Oliver and Company--Jenny was so cute

the way she loved Oliver and tried to take care of him and feed him, and look for him when he got lost.

I also thought Land Before Time had interesting and realistic portrayals of young girls. (Sarah the Triceratops for one.

)
And of course Shannon Dougherty as one of the mouse children in Secret of Nimh!

And Tanya, Fieval's sister in An American Tale.

I also really liked little Miriam in Prince of Egypt, and even Boo from Monsters Inc, although I don't really count her as she was like 2 years old, more of a baby than a "girl."

Dot in Bug's Life was cute, one of my fave Pixar characters actually, but she didn't have much personality overall. Ditto the little squid girl in Finding Nemo. (Does anyone even remember her name?? BTW is it me or does she sound almost exactly like the girl in Monster House?)

Ever see the SNES version of the Toy Story game?? (the Sega version had slightly better graphics, but both were nearly in full 3D) Wink


I read that the Nintendo 64 was the first real gaming system with fluid 3d graphics....is this true?

Yah, it was cool.

Hey, what about Lilo?
Top

That was a Mertle (sp?) reference!

And to add to the topic, does anyone think Zerg will come back? Doubt it, but it would be so cool!

True, but there's nothing saying someone can't turn him evil! Well, maybe that's a bit to complex.

Ah, a cameo would be awesome!

Well, THAT Zurg doll turned good. But who's to say there can't be another Zurg doll out there who's evil?