Think they're TRYING to promote the subplot of Shrek having to win Warrior Fiona all over again to core fans who actually care about the characters, but....face it, guys, when putting "Final" in the title is now the big audience draw, promoting the plot is just polishing the portholes on the Titanic.

Here's a poster with the updated title:

Reminds me of The Santa Clause 3's poster.
Top

Re: Shrek: The Final Chapter

they should call it Shrek the what?.. I just wonder if the only reason they made this movie was that Shrek 3 stunk so bad.. but I guess they had to fill in the question if mom and/or dad died who'd rule Far, Far Away.for the third movie... I wonder if there's still going to do the Halloween special ..
Top

They are sadly. They also have the Kung Fu Panda Christmas special. Yep, this is really the final chapter...

I love all things cinema, from silent movies to world cinema to animated cinema to big blockbusters to documentaries and everything in between!
Top

Not to mention the spin-off feature starring Puss-in-Boots. To be honest, I wonder why they didn't go for the whole story about how Shrek first arrived at the swamp. It surely would have been more interesting and creative than this "It's a Wonderful Life" tale.
Top

Um...guys...even though the poster has the tag "The Final Chapter", if you read the poster's credits, it's clearly still "Shrek Forever After" in the title.
Top

Commercials say otherwise. I guess we'll know for sure when the movie opens? So much confusion.

Well, HTTYD was titled as "Dreamworks' Dragons" in the commercials so I wouldn't necessarily go by them as far as movie names are concerned.
Top

Where I saw it, they had to recut one more trailer just to put TFC in the title--Think it's official.
Top

McDonald's promotion for Shrek started this Friday. Here's a look at the toys:

Went yesterday and got Donkey! What's interesting is the toys are only going to last for three weeks (as the cashier told me), after which they will start offering Shrek watches with the Happy Meals. Here's a preview: 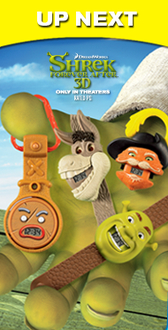 Think that's a first for Mc. I would say they be better off having them at the same time, but McDonald's already has a premium collectable... drinking glasses! Yay! After Third received the treatment, was hoping they would return. Here's a pic: 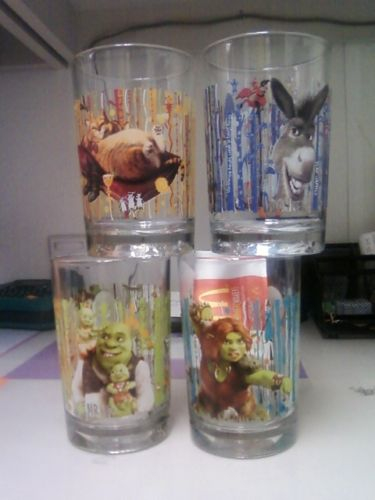 Already have the whole set...

They are cool though, just love them. See what Disney's missing out on!

By the way, everything in Mc labels the film as "Shrek Forever After", so that's further proof that it will be that and not Final Chapter. Phew! You never know sometimes...
Top

It says that Forever After is the final title. That should lay the confusion to rest... probably.
Top

The title never changed, as I tried to tell you, on the posters! "The Final Chapter" was always a tagline to make everyone go and see it. Even on that last poster where people said "well, we'll see", the small contractual credit print clearly read "Shrek Forever After". Both pretty much say the same thing anyway (it's The End), but Forever After does it in a much more fairytale way in keeping with the ultimately soft center the franchise has.

Dan...I can do without the cheapo watches, but those drinking glasses look great - and practical!

Re: Shrek Forever After

29% on RottenTomatoes, at least it's climbing slowly
Top

hmmm.. yeah,those glasses do look snazzy.. haven't seen something like since the olden days when Burger King did that with Disney..

I think KFP should do A Chinese New Year special.. sounds a little weird for them with the Christmas one..

Randall wrote:It says that Forever After is the final title. That should lay the confusion to rest... probably.

And the final "It ain't Ogre..." release poster still says TFC--
So, any definitive word from the opening-day judges?

(Y'know, it could be very confusing for Dreamworks, having their big animated tentpole being marketed under two different titles, and the audience not sure of which one they're looking for...Good thing other movies don't have any trouble with that.)