Actually, it started with a little girl and a cat named Julius.


May 8, 2009 - Disney has announced its next wave of Walt Disney Treasures and it's nothing like the first eight. Arriving on November 3, 2009 are two volumes: "Zorro": The Complete First Season and "Zorro": The Complete Second Season. Each six-disc set will carry a $59.99 list price and present its episodes complete and in their original black & white format. In addition, the four famous one-hour "Zorro" specials will be divided among the two sets (two on each). Extras will include Leonard Maltin introductions, certificates of authenticity, Zorro pins and lithographs.

Umm... wow. Surprised they're are doing this, seeing as the colorized versions are already out.

Well, aside from not including any animation in this wave thus far - major turn off for me - good for Zorro fans. You get the complete first and second season, in cool packaging, and in original black and white!

I don't know, kind of disappointed still. It's bold move, and maybe they'll do something similar for cartoons next year.
Top

What a weird choice: was expecting the four Zorro hour-long specials for sure, but we have the first and second seasons out separately (albeit in color form) and that this means splitting up the four extra episodes seems really odd.

Me thinks the last wave was the last wave proper and that these are basically filler - not WDT releases at all but just given that branding as a token gesture to the fans so we all keep our mouths shut.

They could redeem themselves by announcing a <I>killer</I> animation set - A Disney Education or More Rarities, featuring the later 1960s and onwards featurettes and shorts - but it's not going to happen.

Still...at least the doors have been opened to stretching the brand...could lead to more Ludwig Von Drake shows in multi-disc sets, but I don't think that's going to happen either.

Considering the Zorro S1 came out in the days when they weren't even sure whether companies should be messing around with Those Boxset Things, and they need some "hook" to sell S2 with, it's certainly a big deal--

Just yeah, why DID they have to fall back on the Treasures marketing as a safety net?--We're grownups used to TV boxsets for just about anything, by now.
Unless their MMC sales make them nervous about a show even most Disney Channel watchers haven't seen for the last decade...

I'm saying it could well be the Treasures were over last year, and that the extra wave we got was basically down to public pressure and that's that.

So...rather than cause another outcry this year, they've taken a release that was probably going to happen anyway, and simply rebranded it under the Treasures.

So...they get their sets out there that they were going to release anyway, but at the same time they shut us all up so we can't say that there hasn't been a Treasures offering this year.

The only way these shows fit into the Treasures scheme of things is because we're being offered the original black and white editions...but again that doesn't make them Treasures-exclusives.

Behind the scenes...these are releases that were going to happen anyway...the Treasures branding merely gives them a bit more "authenticity" and, as I say, plugs a gap that keeps the fans quiet.

The proof will be in whether we get anything <I>next</I> year...and as I said above, I can't really see that happening either...
Top

And after wasting all those Disney Movie Reward points on the Season One set!

This Wave just sounds dopey. And it does start to look bad for the releases we were really hoping to see.
Top

Ben wrote:Eric...you've missed the entire point of my post.

I'm saying it could well be the Treasures were over last year, and that the extra wave we got was basically down to public pressure and that's that.

Yeah....But I was going with the theory that they still had their old traumas about how S1 "didn't sell", and that they were now caught between their push to happen-anyway resurrect S2, and still stick to the story that it "needed help", by giving it a better presentation gimmick than it needed.
IOW, they wanted to be newly-confident AND stubbornly-insecure about it at the same time.
Top

Possible cover and... color? If true, boy are they breaking away for Zorro. What Ben has been saying is making some sense... they do look nice though and hey they took my suggestion... in a way.

Well, if they're going to go through all that, why not just change name this one time too? The Walt Disney Treazures! Brilliant!

It was only - in a colorized edition - ever available through the Movie Club (as individual discs) of Rewards programs (as a box set)...both very limited outlets to begin with, and not even available in stores as individual releases.

If you've been following things, you'll note that <I>some</I>one was happy, since Season Two has recently <I>already</I> appeared in the Movie Club as individual discs, with a box set also available and probably headed for the Movie Rewards list too.

So...these are both out there already, but not as general releases. These "Treasures" (nice play on the spelling Dan!) are nothing but filler that, as Rand says, will probably upset more fans, who wasted their points, than placate them.
Top

I know which version of Zorro I'm getting now --

the original B & W versions.

That'll make these Treasures worth my while.

I've got no use for colorized versions.

Glad I sent back Season 1, Vol. 1 to the DMC and got the Monkey's Uncle instead!

Now, I just have to fulfill my club requirements and get four harder-to-find titles and get out of DMC!

Not worth it for more than a few titles...
Top

Same here George, but the completist in me says that if they put the box set version of Season 2 into the Movie Rewards, I'd still have to throw my points at it.

Anyone venture out and got both Zorro sets? Evidently they're already hard to find, most places sold out. Of course places like eBay have dozens, but some are going crazy up. I hate when people do that. In some cases, okay, but these are so limited, y'know? Which makes me wonder why Disney didn't think enough to increase this years Wave amount instead of decreasing! There's certainly an audience. If something lesser know as Dr. Syn can sell out almost instantly, certainly Zorro could do the same. Ugh.

Anyhoo, to wet your appetites, here are some pics: 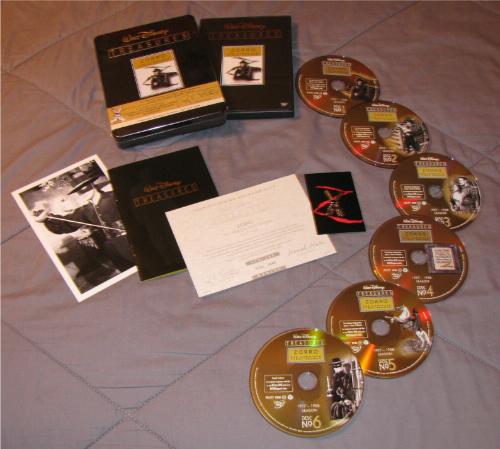 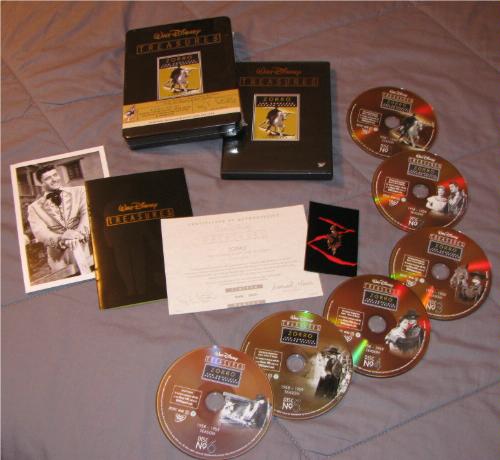 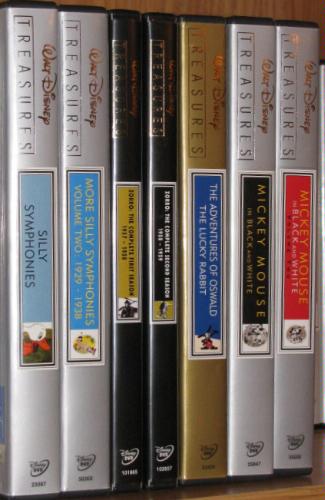 Yay, the paper bands are back!! I missed those. It was incredibly dumb to get rid of them in the first place. Sure, I don't pull them out very often, but it's still a chore to go through them all when a quick spine glance would suffice. They look skinnier though, so, so much for being consistent there. On the whole they do look nice and if I was bigger fan I would jump on these in a heartbeat.
Top

Ironic that the six-disc sets are skinnier than the 2-disc ones.

These look very nice. I expect to have the first one delivered to me tomorrow from Amazon.ca, with the second coming very soon as well from Disney for review. Looking forward to them!
Top

Daniel wrote:If something lesser know as Dr. Syn can sell out almost instantly, certainly Zorro could do the same. Ugh.

Er, wouldn't quite use that comparison--
Dr. Syn was already a Holy Grail title, even if it didn't have seven years of release frustration behind it.
(Actually, make that ten years of anticipation: Back in '99, when Disney did their website "Millennium Movies" survey of the most popular movies by decade, guess which movie came in as Most Popular of the 70's.
Of course, fans were already two steps ahead in guessing that this was thinly, thinly disguised DVD market-survey, so no prize for guessing which one strategically came in as Most Popular of the 40's, either.)

Zorro is pretty much remembered only by nostalgists or those who miss watching it on the 80's Disney Channel, so while collectors thought it was nice to have it, it didn't have the urgency to get it preserved for posterity.
Top
Post Reply
306 posts