Tron: Legacy / The Next Day

With discounts, it's not too bad for two movies on Blu-ray. The big set with the collectible is $65 on Amazon (using a coupon on the page), while the set without the collectible is $50 (with coupon). Not bad, really, for two films, plus one being in 3D. And of course, they can be purchased seperately in order to skip the 3D disc.

I'll likely go for the big package without the collectible, though I'll wait it out for a sale or a bigger coupon from Disney.
Top

I'm with Rand and will probably go for the big disc package rather than the one with the disc, since it has some pretty nice packaging, but I have time to make up my mind!

Even $65 isn't bad for that datadisc set, but I think I'd probably just like a simple box on my shelf, though I wouldn't be surprised if the first film isn't issued on its own further on down the line (that pack art linked to above looks either fake or amazingly lackluster to me).
Top

The original is being released on its own, and the package really is that lacklustre:
http://www.amazon.com/Tron-Original-Cla ... 078&sr=1-1

Word at the Bits was that this should contain practically all the extras from the previous 2-disc DVD set. (The new DVD is reportedly 2 discs, no digital copy.)
Top

Namely the feature-length documentary, which really IS good (not only in that you forget just how much we didn't know about computers in 1982, but I'd actually forgotten that Steve Lisberger used to do those old radio ads), and the deleted scenes--
But also added a new obligatory "Look back at the enduring fan popularity" short that 70's-80's geek icons always get when regular people can't understand why those titles get special editions--Whether it's Superfriends, Thundercats, Xanadu or Tron, there's always that last little bit of vindication.

Guess the BD will just feature the movie in HD and all the extras will be SD ports over from the LD/DVD of before. Lame-O.
Top

While I'm tolerant of first-film iconography and the 20th-Anniversary extras, my complaint is that it's not Tron on the cover! Looks like Ram, the insurance-salesman.
Couldn't they have gotten one geek-iconic shot of 1982 Bruce Boxleitner in action?
Top

I can see what you're saying, but I don't think that's Ram either. Seriously, though, that's some NASTY cover art. You can't even call it a "design". And to think of all the great posters they had to play with... 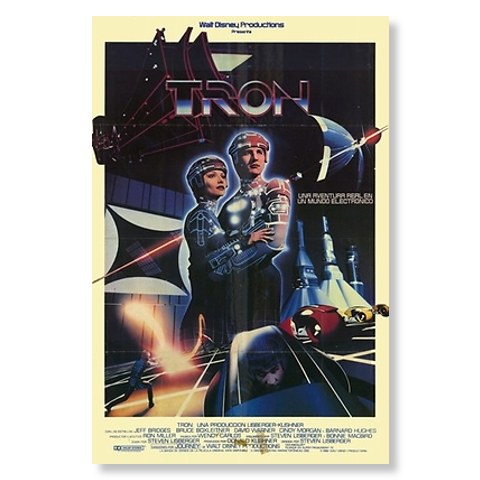 Um...actually, in looking for those, lookie what I found: turns out that BAD cover art does use an element from a theatrical poster image (and is more clearly Tron):

UGH! Are they really TRYING to make it look bad!!?

So has the film officially been re-named Tron: The Original Classic?

No...it's just marketing for the cover/disc release. Putting the word "classic" in there prepares people that it's an "old" film, but "classic" also suggests a quality, so though it may be old, it's respected.

They're just trying to dress it up for younger audiences who go to it expecting Legacy visuals, though for my money Tron '82 had way much more interesting things going on than Tron '10.
Top

I would say most painted artwork used for movie posters looks better than what's typically used on DVDs and Blu rays.

Hate to use it as an example for the millionth time(!) but the original Star Wars theatrical posters were much better looking than the "photo posters" composited for the DVD releases. At least we got some development artwork silk-screened onto the actual DVDs!

The original Star Trek films used the theatrical poster artwork on the first 2-disc DVD releases around 10-11 years ago.

I can't understand why original theatrical poster art isn't used many times. It seems like the people who design the jackets for the home video releases really don't make very good use of existing material. (Frankly, we're not living through a great era of movie design right now at any rate... That ended in the 1980s. Since then, it's pretty all been "bleh" and horribly composed or sourced for the millionth time from older sources. That's true for art design all over the place...) I doubt the original artists are in any position to sue over use of their art (it usually ends up owned by the studios at any rate) and that most would care.
Top

Bob Peak and his peers are certainly missed in movie posters nowadays.
Top

Amazon is selling the 2-disc combos of the two films seperately with an additional $8 savings if ordered together ($44.98). Then all you'd miss out on would be the 3D version and the digital copy of the new one.
Top

I guess you *gain* with that deal as you'd get the DVD copy of Tron in there. Ahh, decisions, decisions...

TRON: The Next Day

A special feature that appears only on the Blu Ray disc for Legacy. Meaning Disney will surely knock the link off before long.