eddievalient wrote:The sad thing is that Disney has had a few movies good enough to warrant a franchise, like Wreck It Ralph, but instead of doing something with those, no, they go with their absolute WORST movie.

Calm down, they canceled that Chicken Little vidquel David Stainton wanted to do! (And the "Atlantis II" TV pilot was actually pretty good.)
Think you meant "their CURRENT worst movie".

By the way, I know GeorgeC doesn't post much anymore, but when he does, his posts are usually very negative but no one ever implies that he's in the wrong (at least not that I've seen). And yet EricJ and I have been getting called out constantly lately. Why the double standard?

(DISCLAIMER: I wish it to be known that being mentioned in his post is not meant to interpreted as any additional endorsement of Lone Ranger, Green Lantern or Frozen as good movies either.
Prince of Persia at least tried to be the game, though.)
Top

Not to keep this topic derailed, but...

It seems to me that GeorgeC got some heat for his comments too. And he did have conflicts with another member or two, as I recall. I think he left us, ironically enough, becuse he found people not critical enough of today's entertainment offerings. He also got frustrated that we didn't come down hard enough on those that argued with him.

As for why people react the way they do to certain members... I do think that what rubs people the wrong way are the following:
1. Pretending that one's opinion is more valid than someone else's. One's opinion may be more informed, and it may have the weight of education and experience, but it does not invalidate someone else's opinion. Yes, seriously. We all have our guilty pleasures, and we all love films that others hated. It's okay. At the end of the day, we're all movie fans. Just enjoy. Debate is good, but insults are not. Which brings me to...
2. Insulting those who disagree with you. Not cool.
3. Harping on something 'til the end of time. Yes, let it go. Move on. If you're tired of this topic, by all means stop posting on it.
4. Posting simply to poop on someone else's parade. (Is it really so horrible that people liked Frozen?) Have your say, but don't spoil it for everyone else by incessantly arguing.
5. Faking insider knowledge, or presenting inaccuracies as facts.

For the record, I loved John Carter (except for the name). I even kinda liked The Spirit (gasp!)--- though it's nothing like what I wanted to see. I found Green Lantern to be a misfire with some good points.

And I loved Frozen, like most people on the planet. Get over it.

Picture kind of says it all. 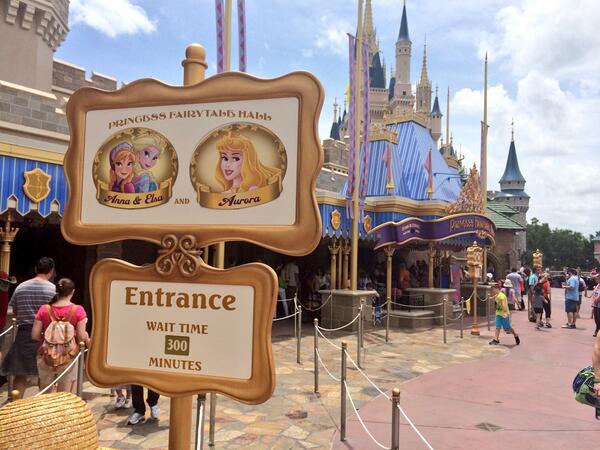 Randall wrote:(Is it really so horrible that people liked Frozen?)

Lord Akiyama wrote:Picture kind of says it all.

(No need to tell me about it, I'm already on the Parks fan boards, and planning a trip for fall, and there hasn't been this much fan Kool-Aid guzzled since...well, Lion King. It's hard not to feel a little resentful if you only wanted to see Aurora.)


It seems to me that GeorgeC got some heat for his comments too. And he did have conflicts with another member or two, as I recall. I think he left us, ironically enough, becuse he found people not critical enough of today's entertainment offerings. He also got frustrated that we didn't come down hard enough on those that argued with him.

I can recall when people thought I was the nastiest meanie in the world for saying that GC's free-associating rambles sounded like every parody of Angry Comic Fanboys ever written.
Fanboy geeks get kidded for being "insular", but that's because they don't look at themselves out of context and realized that only other angry fanboys think it's cool to be "angry". Everyone else thinks they look a bit silly, or are confused by the minutiae that they think is the coming of the Apocalypse and a Call to Storm the Bastille.
If this was a DC comics board, his posts would be par for the course. But it's not. Again, that's probably why he left. (I'd say he "finally came to his senses", but...)

I don't know why the Mods, particularly Ben, treated him like a government-protected endangered species for so long, but I'm glad to see some analysis after the fact.
Meanwhile, he also takes it occasionally over to the Anime boards, where they also tell him to take an occasional Valium, clarify his point, if any, quit chasing the other posters with baseball bats, keep it under eight paragraphs and bring it down a notch.
Top

George was one of our founder posters, and originally a very prolific and - yes, gasp! - elegant commentator. So there was a nostalgic factor there in that he'd been with us from the start and stayed with us through some leaner times...you don't just dump someone like that for throwing a rant out once in a while.

Every board has a grumpy anti this and anti that guy, and the cool thing was that George knew he was it and largely took rebukes on the chin. But I don't think I particularly stepped in to defend him (or anyone else for that matter) more than any other mod here...just that, for a long period there, I was the only one supervising the boards, so my "voice" may have been heard more than most.

But know that everything I said was done in collaboration with the rest of the AVers, through our secret section of the board that most don't even know about, and through the ongoing emails that keep us in contact when away from the site. Although it may have been me posting, our reactions were discussed and agreed as a group.

I don't think you need to keep continuing to bash a member when they're not around to put their points accross, so let's not now make this all about George: bit of a low swipe and a waste of a message post just to simply get yet another derogatory comment in...but I guess at least we know that, in his absence, the position of the grumpy anti this and anti that guy has been filled...!
Top

I admit I'm disappointed that they are going the sequel route. It's not that I hate Frozen I just feel the story doesn't warrant more exploration regardless of the money made. I felt the same about The Lion King. In fact I feel the same about most of the Disney Canon features. I understand the concept behind The Rescuers and Winnie The Pooh warranting sequels and the general story line and characters warrant a revisit, but Frozen, no.
Top

For the record, I told everyone that this (an actual Frozen sequel) would happen.

But has it happened? Virtually no one is covering this, and a quick Goggle search turned up no significant results, so wondering if this is 'worthy" of the news page or not.
"Yesterday is history, tomorrow is a mystery, but today is a gift--that is why it's called the present."
Top

It originally came from this article:

I think it's pretty trustworthy.

Maybe not that many people read CNNmoney. After all, it was picked up by the TAG blog.
“Ahh, fresh victims for my ever-growing army of the undead.
Sir, you have to let go of the button.
Well, son-of-a-bi-“
Top

Do They Want To Build A Sequel?

You bet, but until it gets announced, it's all conjecture...even with my own ears hearing Iger saying on Bloomberg that there would be a Frozen sequel if and when they can map out a suitable progression.

Until it happens, though, a Sequel Is An Open Door (and there you were thinking I was going to say, "let it go"...)

Frozen will now need to gross $9 million in Japan to unseat Iron Man 3 as the 5th highest grossing movie of all-time worldwide. Given that the film has claimed it's tenth consecutive weekend as the top grossing film playing over there, this may get accomplished within the next week.
Top

At the rate it's going, Frozen should stay on top in Japan until Godzilla stomps his way over there.
"Yesterday is history, tomorrow is a mystery, but today is a gift--that is why it's called the present."
Top

Staying with it's success in Japan, Frozen is likely to hop over Harry Potter and the Chamber of Secrets and The Bayside Shakedown 2: Save the Rainbow Bridge! to be the 6th highest grossing film of all-time in the country as Frozen currently has just under a million shy of ¥17 billion while Chamber of Secrets has ¥17.3 billion and Bayside Shakedown 2 has ¥17.4 billion.
Top

http://hellogiggles.com/frozen-director ... goosebumps
"Yesterday is history, tomorrow is a mystery, but today is a gift--that is why it's called the present."
Top

It appears the Japanese absolutely love Frozen. Yesterday, the film's total gross in the country was $179.6 million. Today, the total gross is $182.75 million. That's over $3 million in one day, shooting the film now to the No. 6 spot on highest grossing all-time in Japan and within $6 million of overtaking Iron Man 3 as the 5th highest grossing film of all-time worldwide.

As young Anna would say, "THIS IS AMAZING!"
Top
Post Reply
761 posts