Back to the Future

Here are some words, much as it pains me, in no particular order:

I love and will always admire Bob Z, but following his mocap misadventures he hasn’t had a smash in forever. Even though he and a Bob G have always said "no" to more or rebooted BTTF, they’ve already caved on turning it into a musical. A reboot, which would be more welcome, if it had to happen, than a remake, is inevitable at this point...
Top

Ben wrote: ↑
October 13th, 2019, 7:10 pm
I love and will always admire Bob Z, but following his mocap misadventures he hasn’t had a smash in forever.

Universal's already floated a half-dozen reboot McFly-free concepts, from The Adventures of Doc Brown, to a next-karate-kid girl reboot, to a girl and her boyfriend in the DeLorean. (Or other current dream-car that Brown rebuilt after the train engine.)
They ain't happened yet, but that was back in the days when they were still trying to keep a linear sequel franchise going, and hadn't discovered House-Franchise Nostalgia-quels yet.
Top

Interesting to speculate about how they would handle the whole 80s-as-present-day issue. So I guess the hero/heroine would travel back to...1985? So basically the Roger Rabbit doll, fitness craze, and cowboy arcade game (of course!) will now be looked upon with wonder/curiosity/amusement by whoever ends up starring in this thing? (Yeah, I know Roger is ‘88 not ‘85! Lol.)

The whole idea that the (then looked upon as) gritty/street-smart 80s kid was now trapped in the “kinder, gentler” era of the 50s was a very important part of the original film. Of course there were many, MANY universal themes in it as well (which is the real reason it’s been such an extraordinary success for decades), but any reboot would obviously have to jettison the original 80s-as-“normal” aspect and build an entirely new story from scratch, barring the whole time travel element.

And seriously...how in the world could the subplot of Lorraine objecting to seventeen-year-old Marty’s wanting to go out with Jennifer at night possibly be carried over into 2019? When kids way younger than Marty all have Smartphones?? Times have changed so much and there’s no way a 21st century mom in a potential blockbuster would say something like: “I don’t like her, Marty. Any girl who calls up a boy is just asking for trouble!” (Yes I know Lorraine changes by the end of the film...but still.)


EDIT: Just wanted to correct something...I realize the Roger doll and Wild Gunman arcade game were part of the 80s nostalgia cafe in 2015...what I meant was that if a 21st-century teenager traveled back to 1985 he/she would obviously find these kinds of items as weird as nine-year-old Elijah Wood and his friend found them to be in the BTTF 2015. (Was just using Roger as an example of 80s vintage stuff...I know he didn’t exist yet in 1985...well, not the movie Roger anyway.

)
“Ahh, fresh victims for my ever-growing army of the undead.
Sir, you have to let go of the button.
Well, son-of-a-bi-“
Top

Another amazing video from JoBlo; detailing all the obstacles and headaches the producers (and director of course) went through to just to make the first movie!! So many interesting facts I had absolutely NO IDEA were true, one of which was that attempts to get this film made go back all the way to 1980. (Very refreshing when so many movie sites nowadays claim to have lists of “little-known trivia” that has already been regurgitated a thousand times.)

I mean seriously, who’d have thought that the whole insane “nuking the fridge” subplot from Crystal Skull was originally meant as a major plot point in BTTF???


Definitely worth a look! (Also more trivia on Claudia Wells than I’ve ever seen before!

I totally understand why the producers were so set on casting her as Jennifer, and no offense to Elizabeth Shue but it really is a shame Wells didn’t opt to return for part 2.

)
“Ahh, fresh victims for my ever-growing army of the undead.
Sir, you have to let go of the button.
Well, son-of-a-bi-“
Top

ShyViolet wrote: ↑
October 17th, 2019, 9:27 pm
(Very refreshing when so many movie sites nowadays claim to have lists of “little-known trivia” that has already been regurgitated a thousand times.)

Ain't that the truth. But yeah, interesting video!
Top

Glad you liked it! 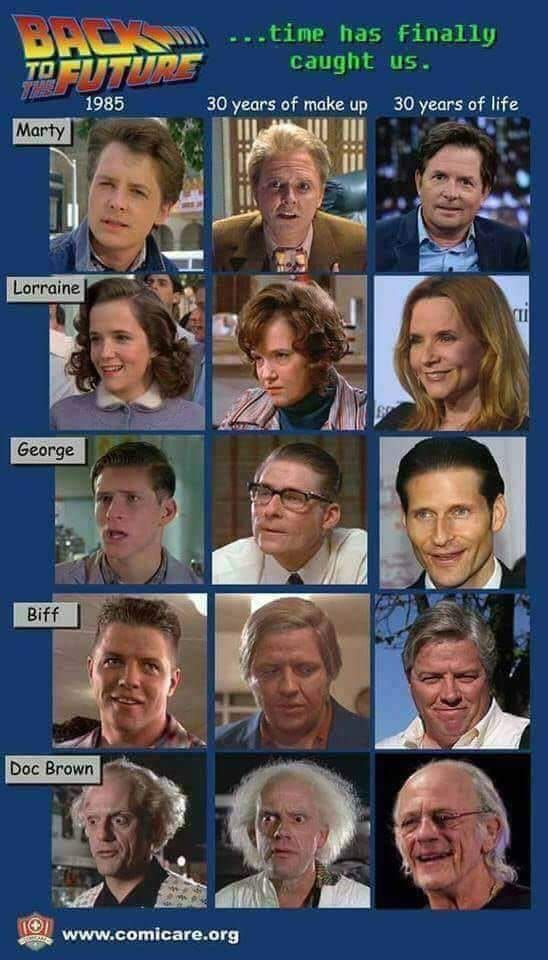 Boy, did they nail Biff!

This was from last season, but it was news to me--- I guess that Biff next got involved in time travel in DC's Legends of Tomorrow.
Top

So I guess we won’t be getting the BTTF Playmobil Movie thus yeah, eh?