you think those are gonna be bad remakes?

Sounds as if they're going to go back to what Lasseter had in mind first time around, which although could be quite cool has now been done to death. It could be good, but it's still going to come off as a rehash of something already done.
Top

it is not JP 4 related, but this is where the modeling software started for Abyss.

who is doing fx this time ?
Top

It's not going to be ILM? Then my WAG would be WETA

they did some exceptional work on T-Rexes in King Kong few years ago and there is this close bussiness relationship between Spielberg & Jackson recently... Does it make any sense to You?

Hey Ben, it was just a link to some demo crap.


Kaszubas wrote:It's not going to be ILM? Then my WAG would be WETA

they did some exceptional work on T-Rexes in King Kong few years ago and there is this close bussiness relationship between Spielberg & Jackson recently... Does it make any sense to You?

it does make sense. sad for ILM though.
Top

If it's confirmed that ILM is not going to be involved with this one then yep - that's sad. JP is an important part of ILM's legacy. But hey - wouldn't it be great to watch another great venture into feature animation world like Rango instead ?

My biggest gripe with this becoming true would be CGI/life action integration. I don't know if it's WETA fault but generally they seem to be less consistant in this regard than ILM and this aspect is IMHO one of the key (but somehow underrated) elements of original JP success.

here is a segment of the real story. more to come

So how does Dennis Muren fit in to all this, Spaz? In that clip you mention he was there color grading the test dino, but other places you've said he wasn't supportive. I always saw guys like Ken Ralston and Muren being pushed into management roles but still stuck into the nuts and bolts of the everyday actual creation of effects. Ralston seemed to be a pretty cool guy (and seemed to leave ILM - where he was pretty firmly fixed as I understood - partly out of frustration and a need to "get away"); I don't know if that's true, but Muren comes over as someone quite involved...?
Top

Ben, the bone test which you see, is the one i did secretly. Stefen did the shader. no one including Dennis knew about this. i had it playing on a monitor in "large gfx" ( a room at ILM ) on the morning of Monday November 18 1991 purposely when Kathleen Kennedy and Frank Marshal walked in. i remember this distinctly because on Sunday night i was at ILM on the phone with Fangmeier asking him how to fire up the RNDR script to dump to Abekas. i had one shot at this.
everyone froze. Katheen asked me, "what is that ?". i told her i was just "messing around". she patted me on the back and said ... and i quote... "you have a very bright future". well i almost got fired is what happened.
i didn't really mean to embarrass the Dennis or the other ILM brass, but i knew if i showed it to them first, it would have disappeared and probably so would have i. i took a chance. in the interview i was referring to the fully skinned version of the rex that i later built. this test Phil, knew nothing about until he saw it at Universal and is rumored to have made the "extinct" quote. that fully skinned rex walk was presented minus me Mark Dippe or Stefen, so i have no idea what was said back then. the previous interview was after Jurassic delivered. there were very many bruised and battered egos. all interviews had to be very politically delivered.

here is an interview done by Ty Ellingson who was in the ILM art department at the time. about 3/4 down he talks about what happened. i also contributed some of my original rex schematics and drawings.

this is the original scan i used to build the bones starting in June of 1991, a month before we delivered T2 this is the lo-res SI2.6.1 version of the rex. once i completed this, i had to provide exact coordinates of the SI effectors so Tippet studio could match there DID system which used potentiometers along the spine to transmit the rotational data via SCSI port to an Silicon Graphics 420 Indigo and ultimately to SI again. we (ILM) built this system for Tippet to do some shots. naturally, the feet on DID could not support the potentiometers because they were too big. so once we got the anim data from Tippet we would hand animate the remaining ankle and feet data. the high-res data of the rex was substituted in at the time of render. this is the way i chained the raptor once Eric Armstong built the data. once again, the units had to be measured and identified for Tippets' DID (Dinosaur Input Device) 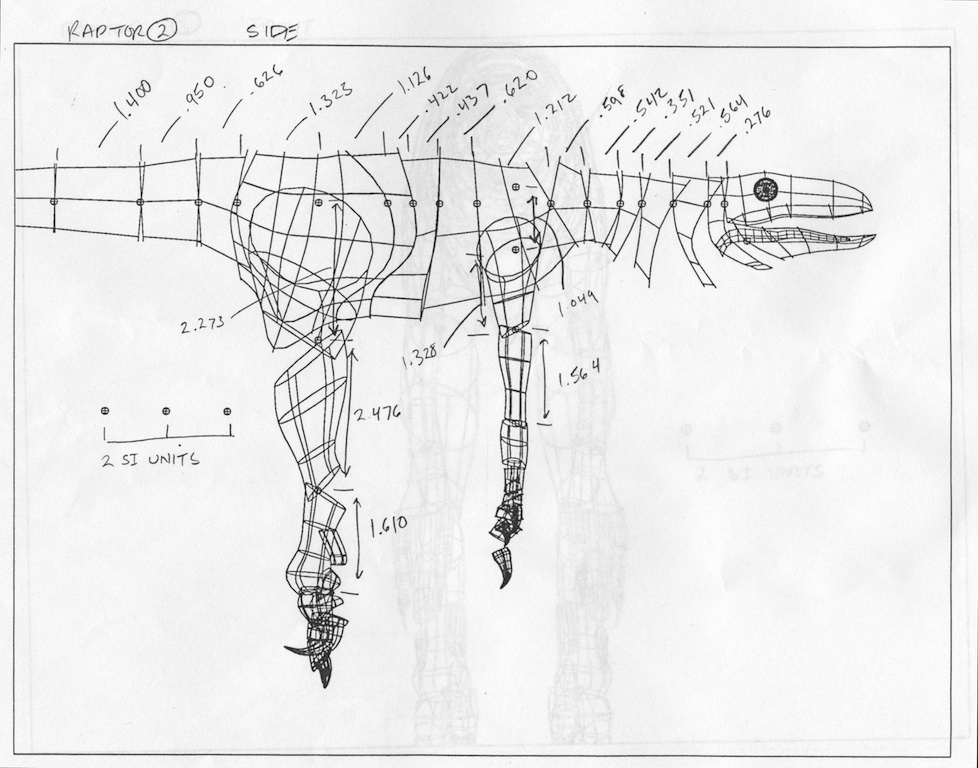