I wouldn't be surprised if Hiro's teammates get to flex their stuff a little more in a possible TV series. From what I can see the film would make a great springboard into something that could fill a space left open by something like Tron: Legacy, or become another Star Wars: Rebels entry in the Disney line-up.

You can bet those conversations have already taken place and my bet would be that Lasseter would prefer to go that route than any number of sequel films...
Top

I'm personally not ruling out sequels. The entire movie, particularly the ending, more or less sets up one.
"Yesterday is history, tomorrow is a mystery, but today is a gift--that is why it's called the present."
Top

Finally saw it today, was very sweet and a lot of fun. WDAS is certainly on a roll.

Oh, and by the way, that second Home trailer looked even worse on the big screen.

ShyViolet wrote:Finally saw it today, was very sweet and a lot of fun. WDAS is certainly on a roll.

Although you would agree, that during the "gripping" climax where Krei is in danger, as much as the filmmakers want to play up the "Loss turned into revenge" idea, there's this inescapably overriding sense of
"(Willy Wonka) No, stop, don't.


Oh, and by the way, that second Home trailer looked even worse on the big screen.

One of my favorite critical barbs was the critic who picked on 1982's Annie (gee, the new one didn't do so well, did it?), and Ray Stark saying it was "the movie he wanted on his tombstone":
Quote, "Services to be held this Friday at a theater near you."

I get this same impression of Katzenberg a little more literally, counting down to Home's opening.
Top

Not quite sure what you were getting at with BHS 6's end but I thought the "twist" was well done and that the film had earned it.

(The JK comment sort of confused me)
Pinky, are you pondering what I’m pondering?

ShyViolet wrote:Not quite sure what you were getting at with BHS 6's end

Ie., that I know what they were getting at comparing [SPOILER] to Hiro's funk over losing his brother, but as gripping climaxes go, I can think of more involving ones than "Oh-yes. We-must-stop-the-villain-from-wiping-out-the-rich-obnoxious-jerk, because-that-would-be-like-a-bad-thing.

(I mean, imagine if Frozen's climax was A&E working together to rescue Hans from mortal peril...)

(Well, the other critic was only joking about the movie being the producer's public "funeral"; here, it's already feeling like we're invited to a wake.)
Top

Review of the new Blu-ray:

Great review Ben! I will say, regarding to the future of these characters, Doctor Strange can go into alternate dimensions. Would it be out of the realm of possibility for him to find these six heroes in another realm and bring them (as CGI characters in a live-action environment like Rocket Raccoon and Groot) to the Marvel Cinematic Universe to fight Thanos in Infinity War? Just a thought!
I love all things cinema, from silent movies to world cinema to animated cinema to big blockbusters to documentaries and everything in between!
Top

Interesting, but I don't see that happening, or even that kind of thing working. To all intents and purposes, Hiro and the gang are "real"...they're just stylised animated humans because they have to be depicted like that in a 2014 CG animated film. If they came into the "real world" of the MCU it wouldn't make sense that they were these odd-looking human characters opposite other, real humans...

I do like the idea of a DTV run, though...it wouldn't disrupt the "no sequel" policy but would give us more, and on a decent level, perhaps opening up the potential for more lesser-known Marvel movies (to rival DC's animated video films?) and some groovy crossovers!

Glad you enjoyed the review!

Wal-Mart had an exclusive edition with a bonus DVD called "The Science of Big Hero 6". Primarily it's a roughly 6-7 minute featurette made up of the videos on Disney's web site with super brief summaries of the real life scientific technologies that inspired what's seen in the film.

However, the DVD does include three additional deleted scenes supposedly exclusive to the set.

Fred's Angels - Storyboard alternative version where all six are on the wind turbine as opposed to just Hiro and Baymax. Given the title of the scene, this is the name of the group Fred proposes.

Meet Baymax - An alternative version of Baymax's introduction with a mix of finished animation and animatics where Tadashi shows off Baymax in a public presentation to Callahan and the school. Fred is used as the test patient.

Meet Yokai - Storyboard alternative introduction to "Yokai" where he is first seen attacking and verbally threatening the group.
Last edited by Dan on February 28th, 2015, 4:50 am, edited 1 time in total.
Top

I loved that Yokai was the silent threatening type. Villains usually get the best lines, but he was better played this way.
Top

So...this is how Disney is looking to continue the franchise...

Kind of a shame, really. I was hoping for a new DisneyToon line to replace Planes rather than just another television series, a la Tangled. Here's at least hoping it remains CG.
Top

Ben wrote:So...this is how Disney is looking to continue the franchise...

Either way--Most BAD, or at least criminally underwhelming, Disney movies have been helped by a TV series to give the supporting characters a little more time to establish actual personalities, and give the story the second script draft the movie so badly needed:
Hercules: the Series, Legend of Tarzan, Team Atlantis, Lilo & Stitch: the Series

And boy, was BH6 the kind of movie that NEEDED one, for the exact same reasons as the others. I would have preferred more of a Marvel/Disney hybrid--with original-comic creator Man of Action already doing the goofy Avengers and Guardians cartoons for the Disney Channel--bringing in some of the comic's original Japanese-pop-culture references into Disney's sanitized white-rice Scooby-gang, but watching said goofy-immature Avengers cartoons is one reason to hope he didn't write it himself.

As for CG, all 3D Disney/Pixar CGI movies have to have "traditional" 2D imagery for books and toy-marketing (qv. all the flap over Merida's "cute" 2D look for Brave's marketing), and we've already seen magazine hints of Disney's Big Hero 2-D before the movie came out: Man Of Action is an author/artist collective, not a single person.
Top

Ben wrote:Kind of a shame, really. I was hoping for a new DisneyToon line to replace Planes rather than just another television series, a la Tangled. Here's at least hoping it remains CG.

Well, if this image is any indication... 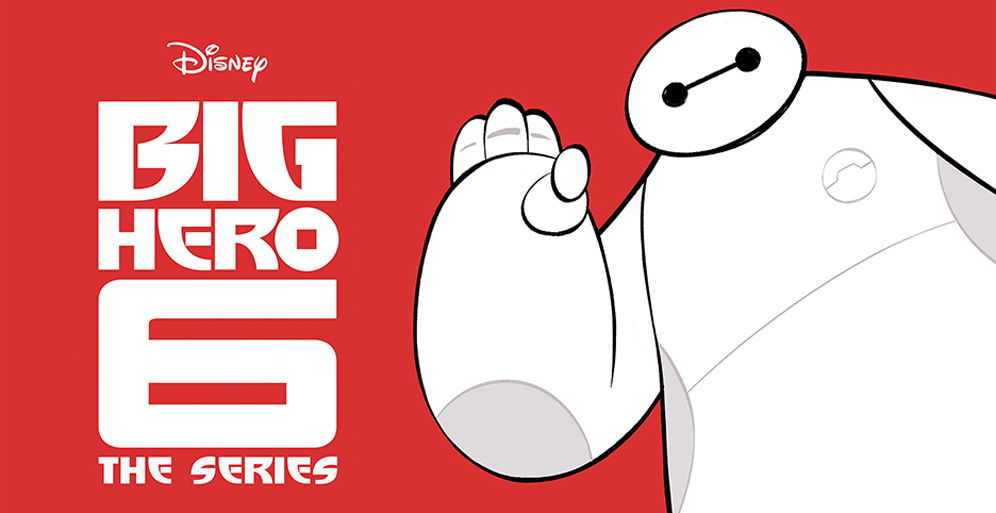