The Disney catalog bundles continue to come along nicely...

August 12 will see releases for The Adventures Of Ichabod And Mr Toad (some reports suggest Fun And Fancy Free will be included in this release, a little odd given how popular the Mickey And The Beanstalk segment is), Bedknobs And Broomsticks (no word on if it's the release or Special Edition cut, or both, but it has the last DVD cover artwork), Herclues (at last!), Tarzan (dubbed a Special Edition, much like all these covers have them, though no word on if the otherwise dire Tarzan II is included as an extra), and the Mickey version of The Three Musketeers, originally a DTV that I thought could have had a shot as a classic theatrical (it certainly deserved it).

With the Special Edition label on their covers (Musketeers seems to be a 10th Anniversary) there is hope that some original extras might be carried over. Ichabod/Mr Toad might have Fun And Fancy Free (strange as it is), while there's the potential of two cuts for Bedknobs, Hercules had a laserdisc set's worth of extras that never saw that format or DVD, and Tarzan, as we know, had a packed two-disc DVD set...so hopefully much of that will be used even if they bundle in the DTV mid-quel.


My guess is that we'll get another batch in the fall, alongside Sleeping Beauty and Maleficent's debut on disc.
Top

Hercules and Tarzan were both supposed to come out in July, but then I read a week ago they got moved to August.

Ichabod and Mr. Toad and possibly Fun and Fancy Free on blu? Boy, soon all the canon Disney Animated features will be on blu before long.
Top

The Fun and Fancy Free mention is odd, though I'd be happy to see a true double feature presented (hard to imagine F&FF as simply a bonus feature on TAOIAMT).

Bedknobs will likely be a straight port of the DVD, and a welcome addition to my Blu-ray library. I'll hold on to my original Tarzan 2-disc set for now, as we await confirmation of bonus material. Hercules may be bare-bones, but bonuses would be great (I only have this on LD). We shall see how "Special" these editions are.

Three Musketeers, while not a necessity on Blu, will also be a purchase for me--- great little film.
Top

Amazon's pre-order pages confirms Fun And Fancy Free will be coupled with Ichabod/Mr Toad - although I hope they give it a dual front cover as opposed to just going with Ichabod on the front (recycling the years old Gold DVD art), which I never understood to begin with when that film also contains the more Disney-like and audience favorite Wind In The Willows segment. Of course, what would be great is new art that simply mixes all the characters up: I'd be quite up for a nice montage of Mickey, Mr Toad, Bongo, Ichabod and associated characters all sharing the "stage" as it were.

Also, Amazon's listing for Bedknobs states a 117m runtime, so unless the 25th anniversary extended/original cut is also included (or these stats are not final ye), then it looks to be the tighter theatrical release that we're getting. Double-edged sword for me: while I grew up with the shorter cut (actually, an even shorter UK cut that came down to around 98m and basically cut most of the songs!), I do really enjoy many of the additions to the restored full-length version: Browne's song in London (With A Flair!), the Eglantine midsection and various little scenes. The longer Portabello Road sequence can drag, but it always did a bit so not much change there, but the longer cut was what the Poppins crew was going for and it would be nice to see the restoration team's efforts preserved. Oh well...

Seems the Diz is simply trying to get all these films out ASAP on a final physical format before they make all such alternate versions and editions only available online.

Picked up Hercules, Tarzan, and Adventures of Ichabod and Mr. Toad/Fun and Fancy Free today through Amazon. The double-film-double-set features a neat surprise with the inclusion of The Reluctant Dragon on the blu ray disc.
Top

Is it the short featurette version or the full feature, in HD or SD? I've already ordered, but would be fun to know before it turns up here!

Also, Disney seem to be offering Ichabod/Mr Toad in its own edition...!? No news on extras but it seems it's just the movie...

Nope. It's just the 20 minute short. I read that in a review.

And those who own Tarzan's two-disc DVD are going to want to keep their copies, as the Blu-Ray is apparently pretty bare bones. No good extras on Hercules, either.

Sorry, but I need to correct ya, Dace. Tarzan DID port over most of the worthwhile bonus material from the 2-disc versions; however, image galleries were once again dropped, as well as text scereens and DVD-ROM content. But the featurettes are all on the BD.

And Reluctant Dragon is the full 74 minute feature, according to Blu-ray.com's review..

They also pretty much ported the only Hercules features I recall on the DVD of note, the brief making-of and the "No Importa La Distancia" musica video (the Spanish version of "Go the Distance" by Ricky Martin). A sing along for "From Zero to Hero" is also included.

It's the Ichabod/Fun and Fancy Free set that is otherwise bare bones outside of the inclusion of the feature-length Reluctant Dragon. This means the brief "Story Behind" feature for Fun and Fancy Free that includes the deleted Minnie scene is not present.
Last edited by Dan on August 16th, 2014, 6:25 pm, edited 1 time in total.
Top

Hmmmmm. Started to question the credibility of those reviews I read now...

But Hercules not having any extras pulled over from the LD still isn't cool.
"Yesterday is history, tomorrow is a mystery, but today is a gift--that is why it's called the present."
Top

Hercules never had any extras on LD.

Like Mulan, a bunch were produced but never put out (Mulan's LD package eventually surfaced on the SE DVD and BD), since the $100m box office was not deemed enough to warrant a second SE pressing as was the tradition back then.

There was a TV making of they could have included on the new BD, plus a South Bank special on Scarfe's working with Disney on the film, and the DTV prequel Zero To Hero that, even in SD, would have been SOMEthing to add to a very bare package.

Also, Bedknobs is the cut 117m cut only, not the original SE version.

It is amazing just how incompetent Disney Home Video can be. Just astounding.

I got rid of my last DVD already, expecting a simple port of it onto BD; but, this will give me the excuse now to track down the previous DVD, which had the longer version of the restoration featurette on it.
Top

Might want to nick part of the header or rename altogether) 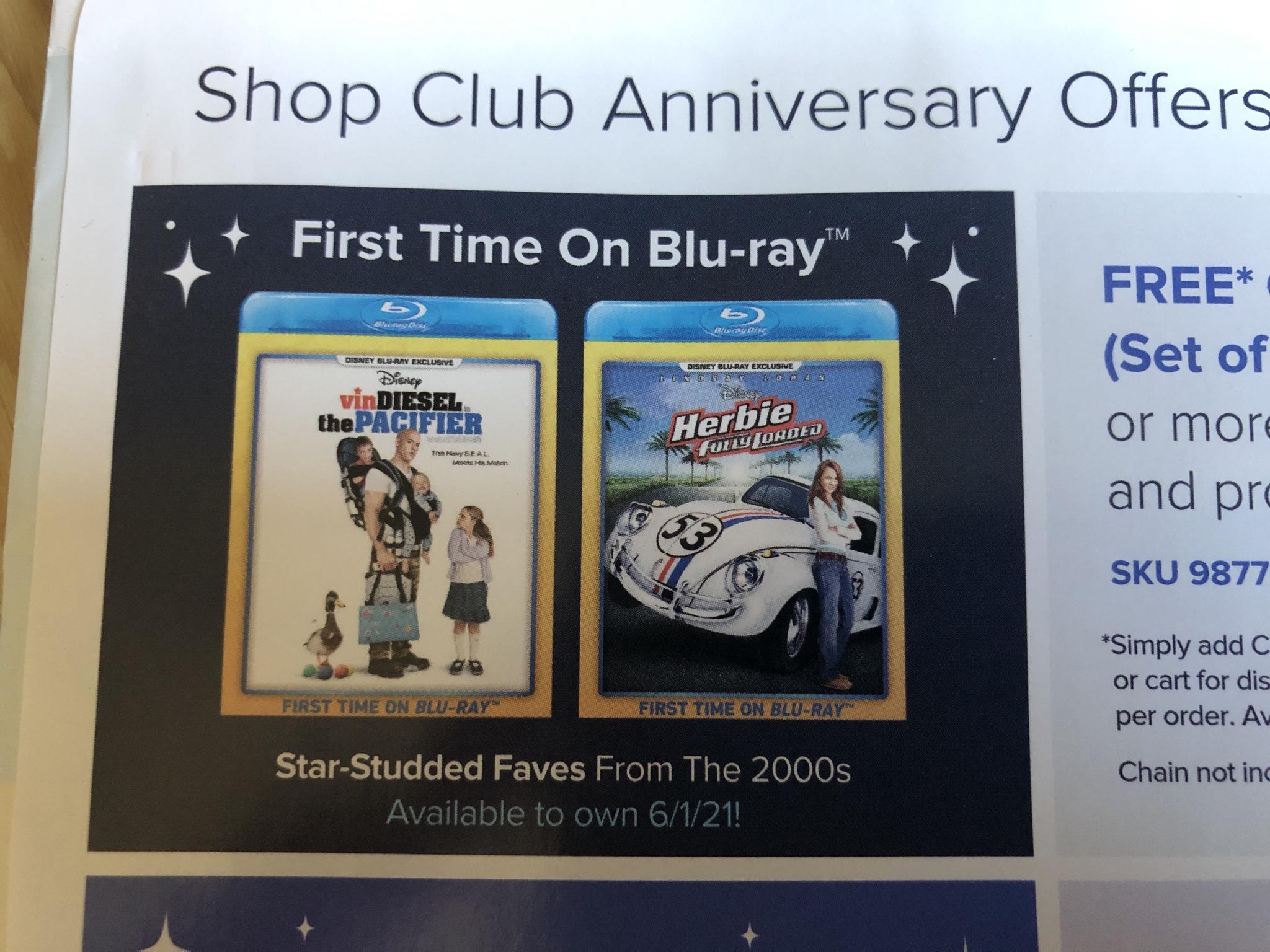 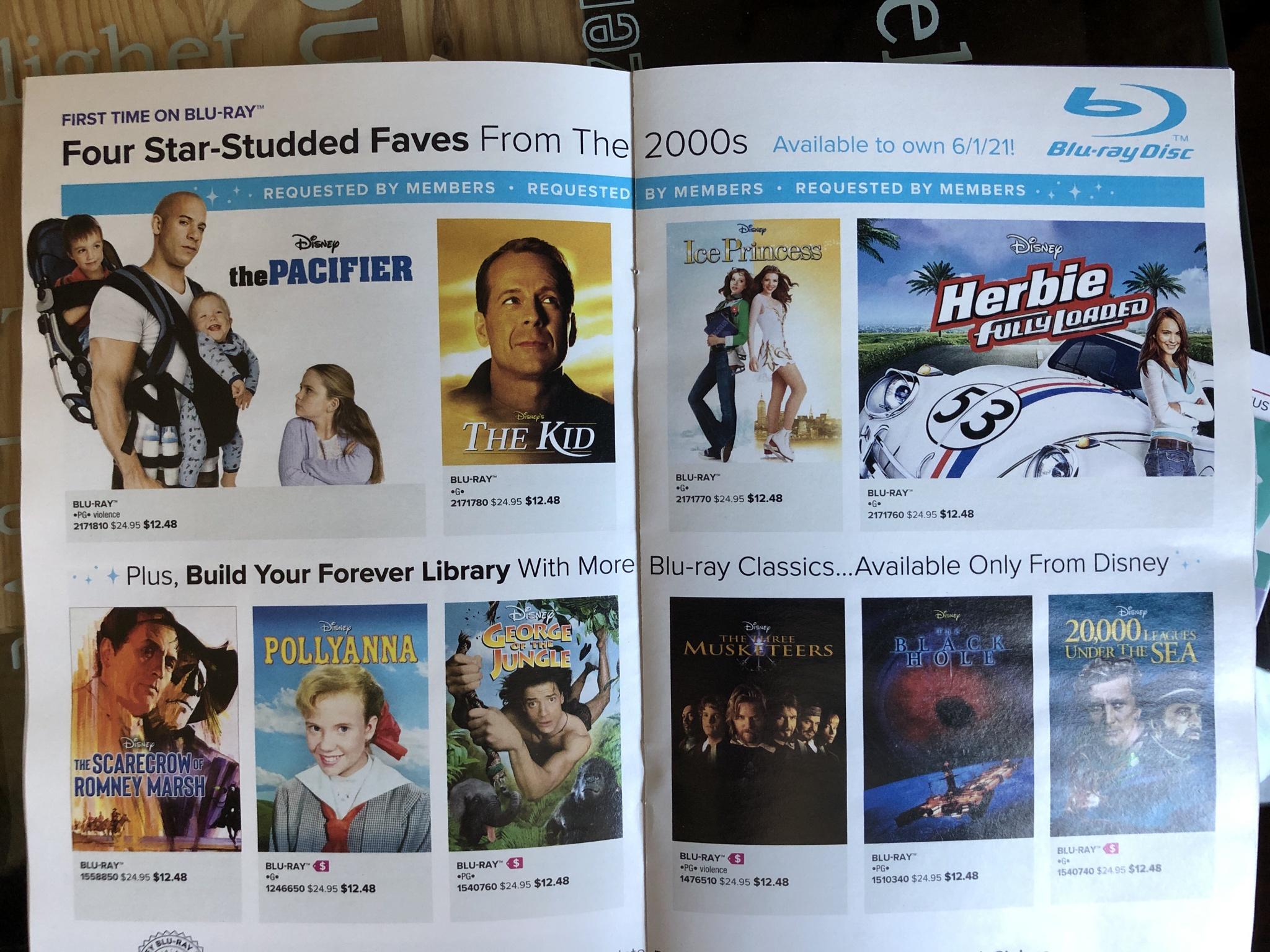 I don’t really need Mr Nanny...oops, I mean The Spy Next Door...er, oh, I mean The Pacifier, but I’m well up for the fifth Herbie.

No, it’s not great, but I have the originals, which we had just run when the pandemic cancelled our movie nights. Fully Loaded would have been run from the DVD but now I can hold off and go with the Blu once our normal service can be resumed!

So cool the Diz seems to have renewed their interest in giving us these things. Of course the last two animated classics are the big wants, but I’ll throw my hopes in the ring for Snowball Express (never OAR on DVD) and Condorman...for starters!
Top

Make Mine Music and Melody Time, for sure. Then... Cat from Outer Space, Condorman, maybe some more Kurt Russell, the Merlin Jones films, and really so many others I'd like.

Big pass on Pacifier. I maaaay cave on Fully Loaded, but I never cracked open the free DVD I got from DMR.

Regardless, it's great to see the line continue! And now I can put in another order so that Jeremie can get his copy of Black Cauldron!
Top
Post Reply
41 posts