Avengers and the MCU

The first episode is actually titled "Filmed Before a Live Studio Audience". Clever!

By the by, "WandaVision" feels like "It's a Good Life" from Twilight Zone. Now that I did forget to mention!
Top

Maybe the laughing came from the audience, but it still sounds delightfully fakesey.

I'm guessing they were instructed how to laugh it up.
Top

Although, of course, the Good one-set sitcoms--Lucy, Honeymooners, Mary Tyler Moore, Bob Newhart, All in the Family, Cheers, etc.--were performed in front of live audiences, where the gags HAD to be funny, and the performers deliver them.
Unless you're of a certain age that only selectively associates "Filmed in front of a live audience" with Happy Days and Laverne & Shirley's slow descents into audience fanservice.

(So...if you generationally hate Happy Days' use of a live audience, AND Bewitched's use of the same canned track...)

You are aware that even live studio audiences still had "LAUGH" light boards that prompted them to raise a chuckle even if the gags or performances didn’t hit, right?

As an example of where this is most obvious, and the audience is responding to be polite rather than because they are genuinely cracking up, catch any first half episode of the first season of Friends. Yes, the writers and cast were finding their feet, but there’s no indication of what was about to happen in those initial "we're really really trying" shows.
Top

Soundtrack albums will be released weekly. On Youtube, too. Cool and all, but no insert songs? That's half the fun. "Yakety Yak"! Not to mention songs from the initial trailers. Unless they decide to release a compilation when the show ends, pretty bare. The end credits score is amazing, so haunting. Again, the theme is so catchy! Made it my ringtone.
Top

A very good, subtle rewind moment between Vision and Wanda! Looks like the neighbors know on some level they're being controlled and are too scared to let Vision know the reality. Great scene with Geraldine, and then seeing her get kicked out of the TV dome. Interesting that she stayed in her 70s sitcom attire when she left the bubble. Glad they officially used "Daydream Believer"! Perfect use and the lyrics were so on the the nose with the episode. So many layers. This episode really sets the groundwork for the series.
Top 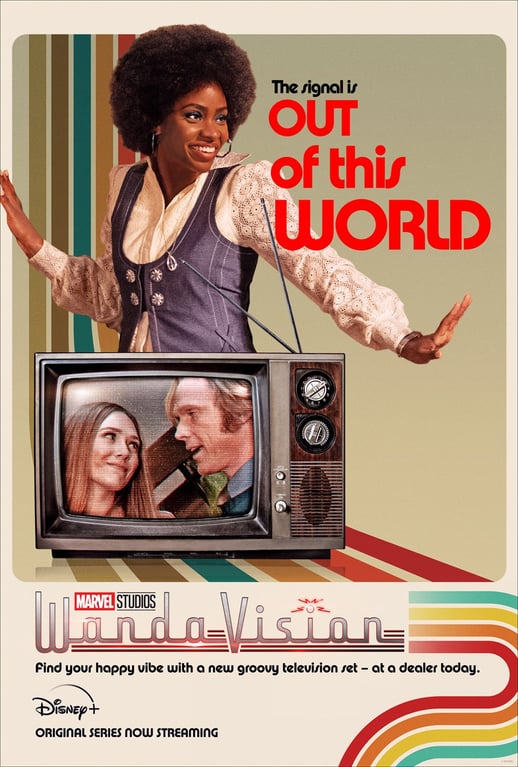 Signal isn't the only thing out of that world. Very clever!

You best believe I picked up on most of those. Fun to analyze!
Top

Wakanda series coming to disney plus.

I'm quite enjoying WandaVision. Neat how Episode 4 changed course and showed us the double meaning of the show's title (not that it was exactly a mystery). Looking forward to seeing where it all goes. Congrats to Marvel for doing something cool and interesting with their first D+ show.
Top

As much as people complain about not being able to binge an entire series -- If Mandalorian didn't prove it, Wandavision shows how much better the week-by-week approach is, allowing the fans to interact with one another over the latest episode rather than being afraid of going anywhere near someone talking about the show in case you're at different points in watching it. Takes me back to the Lost days!
Top

I hate binging a new series and the lost interaction we used to get meeting up and talking about the watercooler moments. But then, at the moment, I miss meeting up, too...!

I also hate binging new series. There's no fun in it. Not how I grew up with TV, so I'm loving the slow pace. "WandaVision" is making you think. So few shows do that these days. Episode 4 was pretty cool.

Gave some answers while leaving some mysteries to be explored. Appreciated getting to see more of the grim reality of coming back from the snap. Loved seeing the first three episodes from a different perspective, how it's affecting the "real" world while also threading it all together, like seeing Jimmy Woo trying to communicate with Wanda through the radio and Darcy being the one who was watching the monitor. She noticed the cuts! Happy we got to see the moment Wanda cast out Geraldine. Zombie Vision was creepy!
Much like what was said in the episode, I'm invested!

I know D+ exists to give all the "forgotten" MCU actors...er, characters their own lil' backyard participation trophy--for the same reason that Agent Coulson and Peggy Carter got their own series back when it was all about ABC--but seriously:
What, did we not hammer Darcy's stake deep enough after Thor 2? Or we didn't hammer it three times for the trinity, and now she's back to torment the living again??

If there was such a thing as the MCU Equivalent of Scrappy-Doo...

And yes, how long until our Millennial goalpost dance over "Golden Age of TV...All our shows are big depressing R-rated movies now, and we don't have to look up TV Guide or watch our parents' icky commercials or sitcoms anymore!" finally takes the shine off of Binge culture?
Yes, when I was a kid, I thought it would be neat to scarf an entire 2-lb. package of Oreos in one sitting too, until the adult in me discovered the sophisticated habit of just a three-cookie coffee-dunk every night, for as long as the package was still there...