New poster for "The Mandalorian": (minor spoilers if you're not caught up) 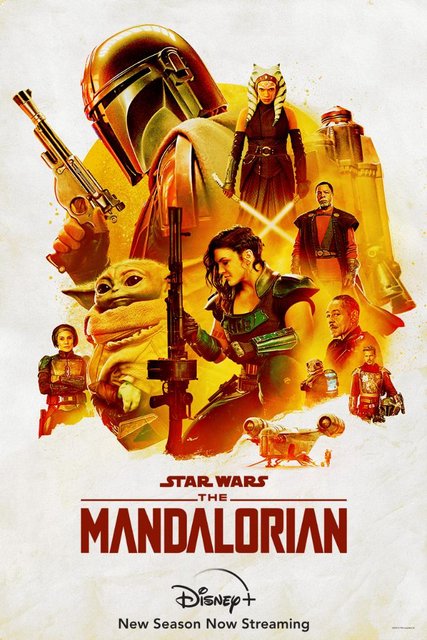 Makes it look like Mando is the villian.
Top

All caught up with Mando now. Just a personal opinion, but I think Robert Rodriguez may have directed one of the best episodes to date.
Top

It's amazing how Disney is determined to bring Star Wars into mediocrity just in order to fanservice "true Star Wars Fans".
Top

So they held this back until we knew Ahsoka was the surprise of this season.

But...they’re gonna need to redesign it again after this season's even bigger shock surprise ending...!

Farerb wrote: ↑
December 18th, 2020, 6:46 am
It's amazing how Disney is determined to bring Star Wars into mediocrity just in order to fanservice "true Star Wars Fans".

And yet their '11 Muppets movie was a "must see" and "fan celebration"?

We take it for granted that not only does any studio that buys a toy has to play with it, they have to sign their name on its boot, like Andy did with Woody.
And anyone who saw Last Jedi no longer blames "Disney" for screwing things up, although that could change with Kathleen Kennedy's next few direct-to-D+ spinoffs. There was still Lando in the "Solo" movie, after all...

What, that Snips is getting her own series? That's not a surprise!
Top

That’s not the surprise.

After being surprised by the last few episodes, we decided to polish off the season with the last two. Pretty good eps, leading up to an ending that wasn’t particularly well done but opens as many doors as it perhaps closes...

So...was this so badly done that we don’t even want to talk about it...?

Gotta say I was happy with it. Are spoilers ok yet? I'll be fairly opaque without resorting to spoiler tags! Having Din travelling around with the child season after season was never going to be great TV, so wrapping up that storyline so they can move on to something new (like Mandalore itself) was a wise decision. And, in universe at the time this series takes place, where else should the child have been taken? Their choice fits the overall storyline.
Top

Just started watching Mandalorian (got a month of D+ just to catch Soul, and started playing "Hey, get me, I'm watching one of those 'binge-craze' series the kids are into!"), and have to admit, it's not a bad Lone Wolf & Cub ripoff, for what it is:

It's still hard to latch on to an antihero whose face, let alone whose personality, we can't see, and I'm strangely immune to the Child's seductive evil-cuteness, but I forgot Dave Filoni and Jon Favreau were on the pilot, so it's not too painful, much as I dreaded taking a curiosity peek at what People Who Weren't Alive to Watch TV in the 80's watch. (Speaking as a loyal "Clone Wars did it right" fan.)
Of course, I'm only two episodes in, so I haven't run into Ms. Steroid Mask-Denier Trumpist yet...
Top

Filoni and Favreau are heavily involved throughout, so if you like it so far, you'll likely like the rest. The plotting can be a little zig-zaggy and boomerangy, which could test your patience (especially if binging rather than watching weekly), but overall it's a fun show to watch.

As for the Season 2 finale, it was the only ending we could really expect given what was set up, though I'm still surprised it went there. As one might expect, a certain de-aging effect was dodgy, which is why I was surprised they even attempted it on a TV budget. Still, a decent conclusion to a decent season. The show isn't "Clone Wars at its best" good, but it's good.
Top

Randall wrote: ↑
December 21st, 2020, 7:48 pm
Filoni and Favreau are heavily involved throughout, so if you like it so far, you'll likely like the rest. The plotting can be a little zig-zaggy and boomerangy, which could test your patience (especially if binging rather than watching weekly), but overall it's a fun show to watch.
The show isn't "Clone Wars at its best" good, but it's good.

It's better than what I saw of "Rebels", so that's one post-Clone Wars compliment to Filoni.
(And I never Binge, for the same reason I don't gobble down an entire week's worth of groceries during a snowy winter, but three or four single episodes in a week isn't bad.)

) who've never seen the Original Trilogy before, and watching new fans discover them for the first time since '97 reminds of the naivety that Lucas put into the original ANH, and the humor that Lawrence Kasdan gave Han Solo in Empire and Jedi.
Overbudgeted TV in the, haha, "Golden Age" of binge-streaming seems so determined to buy our shock-and-awe with million-dollar-an-episode CGI budgets, they often try too HARD to justify it with a Wagnerian sense of self-importance before the Shocking Season Finale.

For now, there's a lightness in the series that isn't necessarily Empire, but isn't what I was dreading it was going to be, either.
("Well, what were you 'dreading'?"...Rogue One. Period.)
Top

I found Mando to be much more Rogue One than OT. I totally miss the humor and British accents of the original films. In Mando-verse, everyone is episodic American television, which doesn’t help it from feeling cheaper and less authentic than the originals.
Top

Now even the SW universe has to be a universe...!

They've already got their faux-Marvel "Star Wars" franchise logo (the one that flips through the characters, rather than the comic pages) for putting on the front of their D+ series...Ask For It By Name!
Top
Post Reply
1111 posts