The New DVD and Blu Thread

Yeah...loved all those foxes in the Dwarfs' forest...
Top

(Er, no, note the little "In-joke" flag, as any mention of Robin Hood (especially alongside Snow White) automatically associated Aw, c'mon, thought everyone had SEEN it already, that's why I didn't post it!

I just thought it was: 1) old, and 2) not really accurate. Sure this is the most obvious reuse of animation, but it's not like Snow White turns up in Sherwood Forest! And I gets a bit sick of smartypants people trying to sound like they know some big Disney insider secrets when it's not that big a deal!

These Disney sets are now appearing at Costco. Each set has three standard DVD cases, collecting previously-released discs. Not sure if they are new collections, actually, or if they are coming out anywhere else. Good price for three DVDs, and I had none of these films yet. Mostly, I wanted Treasure Island, but it's nice to have the others too, for the price. There are two more volumes as well , devoted largely to the Apple Dumpling Gang films and the Witch Mountain originals, with additional films which I've forgotten. 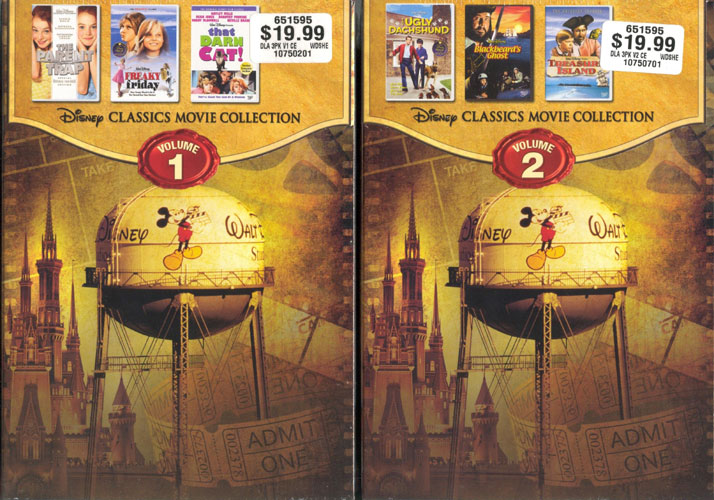 I also picked up the BBC Natural History Collection Volume 2 on BD ($75), and Oliver & Company, which was just $8.99--- my daughter loves that movie, but the laserdisc I have is looking pretty dated now.
Top

Interesting! I'd sure be interested to know what other films were included in other sets (had a look online but couldn't find anything Costco-related).

Good price, as you say, for three movies a pop, but some of those are strange bedfellows: better to have the original Parent Trap in the first box, and the progression on the second makes sense (Dean Jones, Dean Jones with a pirate, then Treasure Island), even if Treasure Island is an odd one to put in with two domestic comedies!

I have most of them, but never did get to Treasure Island, mostly because the complete lack of extras on an overpriced disc. Lately the price has come down but now it's more a case of waiting for Blu-ray: Sky Movies here recently screened a gorgeous restoration of Island in HD and it's only a matter of time before Disney starts issuing some of their more "important" live-actioners on BD, and Island with some decent extras surely has to be among them.

I might've actually been interested in that first set if it had the Hayley Mills Parent Trap instead. But I wouldn't have joined Costco just to buy it, anyway.

Yeah, really weird that it was the newer Parent Trap, which I didn't even realize until later.
Top

An old VHS of that still suffices for me on that title!

An okay update, sweet even, but not an essential. Fun to see a very young LiLo, though, before the rail jump!

LiLo was actually excellent in that film. You could tell then she had star potential. I saw it on its initial release, and was amazed how much I liked it.
Top

droosan wrote:I might've actually been interested in that first set if it had the Hayley Mills Parent Trap instead. But I wouldn't have joined Costco just to buy it, anyway.

Which Parent Trap DVD release would that be?
There have been several releases of the Hayley Mills original including a Vault Disney edition which was the best version to own... The second disc had extras including I'm sure publicity stills, a documentary, and a talk or two with Mills.

The current in-production DVD version has the first two Parent Trap films Mills starred in... the latter of which was an early 1980s Disney Channel movie. (The movies are on separate discs so you don't have to worry about horrible MPEG compression.) Around that time, Mills was fairly involved with Disney in projects -- even appearing as hostess of a Disney documentary about Disney animation. I believe she was living in the US at the time and raising her kids here. (Ironically, the only animated film I can recall her being involved in was a stop-motion movie made in the 1960s where she voiced The Little Mermaid!) Mills' last call-to-fame was as the original star of and teacher in the TV series that evolved into "Saved By the Bell!" Weird, but true...

Right now, the only Mills film I own is Pollyanna (Vault Disney edition), the film that introduced her to most people.

Yes, I also went through a "Haley Mills" phase phase in the 1980s. The thing about films is that they preserve people as they looked back then. It still rocks my mind that she's old enough to be my mother!

Ben wrote:An old VHS of that still suffices for me on that title!

An okay update, sweet even, but not an essential. Fun to see a very young LiLo, though, before the rail jump!

To be fair (and this will probably be the next-to-last time I'll venture anything like a defense for LiLo), Mills "fell off the wagon" sort of speak in the late 1960s/early 1970s and did some stuff in her personal life that was fairly scandalous by most persons' standards and people didn't see much of her again in movies until the early 1980s.

What she did was at least as bad as anything as several of the current crop of Disney actresses have done... It's just that by the time she fell off the 'purity chart', she was out of contract with Disney and very much out of the eyes of the American film industry. It was also the late 1960s/early 1970s which was a very turbulent time and anything short of murder would have seemed tame by comparison.

Of course, this is 40-year-old-news and anybody can look it up now. Being in the public eye, the memories of past behavior like this are always going to get flung back in a public personality's face from time-to-time, like it or not. It's bad enough when it happens behind the scenes in your own family...

Those are lessons you'd think more people would keep in mind if they choose to become involved in entertainment in front of the camera... Seeing by what's happened all the time for as long as a I can remember, that's obviously not the case.
Top

There have been several releases of the Hayley Mills original including a Vault Disney edition which was the best version to own...

CtToI, think there was also an earlier Vault edition of Treasure Island with full historical extras, before it was re-released on the bare-bones we have now on the set.

Nope Eric, there was a Vault Disney edition of Treasure Island announced (it was to come in the wave with The Love Bug and 20,000 Leagues Under The Sea) but when those came out, Treasure Island was just the disc that we have now.

In fact, you can see where the combined packaging look for all three fits in: eagle eyed among you will notice that the sky background on all three titles' front covers is exactly the same sky shot, so that they would subliminally line up.

Don't know why that disc was canceled, but then the Vaults went down to the single disc collectors' titles (Witch Mountains, Apple Dumpling Gang, etc), but Island never got the edition announced.

To be fair, they never announced the extras, just that Island, Love Bug and Leagues would form the second wave of Vault Disney releases, which had a blu spine after the orange of the first wave's four titles (at least I have my Parent Trap disc signed by Hayley when she returned to Elstree Studios!).

I still kick myself that I never picked up Pollyanna or Swiss Family Robinson, and kick myself even more that I didn't just buy the four-set boxed set edition. I've never really warmed to the saccharine of Pollyanna or the mock-adventure of Robinson, but I saw that film again recently and did actually enjoy it somewhat.

Time to take a look on eBay, me thinks...

GeorgeC wrote:(Ironically, the only animated film I can recall her being involved in was a stop-motion movie made in the 1960s where she voiced The Little Mermaid!)

There have been several releases of the Hayley Mills original including a Vault Disney edition which was the best version to own...

CtToI, think there was also an earlier Vault edition of Treasure Island with full historical extras, before it was re-released on the bare-bones we have now on the set.


Please retire from the Forum if you can't get off this personal vendetta you have against me.
When and if the posts get off-topic, there ARE appointed moderators for that. You're NOT a moderator.

I deeply resented it when you called me a stalker, and frankly your behavior hasn't improved one bit since then.

You occasionally show signs you're actually growing up and are a bit more polite towards people -- even when it's forced -- but as usual you can't help yourself and slide back into this behavior set.

And, to cap it all off, you're not just doing this against just me, either. You've been rude to at least a half-dozen other people regularly on the forum, Eric, and NOBODY appreciates it.

Hate to bring this up again, but frankly I'm getting sick of it.

You KNOW what would happen in public if you behaved this way around me all the time.
There's a point when even the "little guy" can only take so much and WILL retaliate.
And believe me, you won't have a single supporter amongst people who know your history of being a jerk to people...

Please just do us all a favor and crawl back into whatever hole you come from and don't come back if you can help yourself. It would be appreciated by more people than you know!
Top

Here's a neat release flying under the radar: George Pal's Houdini, with Tony Curtis, coming out on Blu-ray tomorrow: