The space jam 2 logo was in the back of one of the pictures. Guess wb didn't want it shown off yet.
Top

Logo and title have been revealed; Space Jam A New Legacy. Kind of wary of anything with the word "Legacy" attached to it...
Top

Yeah, doesn't Warner usually save that for movies like Doctor Sleep or Blade Runner 2049, where the new replacement/offspring takes over future sequels after the original-actor kills off his old-movie character?

But then, they couldn't call it "Space Jam 2: a Brandname Jumpstart", even if that's what it was.
Top 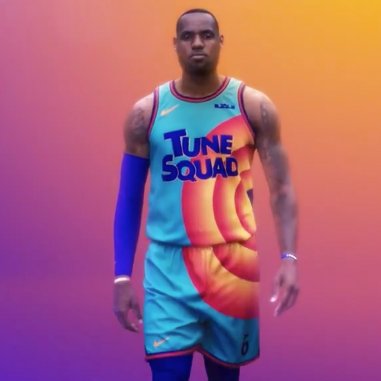 Yeah, it looks less like a throwback to the 90s than a satire of it.

Agree. Looks worse then the 90s one. Not a fan of it.
Top

Looks like they will warm up in a game (or are they the main bad guys?) with the other team "the wb" and one of the players is none other then hagrid from harry potter!

Also standing next to bugs is what looks like a female. Who is this?

Also standing next to bugs is what looks like a female. Who is this?

...You mean Lola Bunny, from the first film?

--despite Warner's retroactive attempt to "jam" her into new official Looney canon, after they discovered Tweety was male and they didn't have a female demographic-marketing Looney character. (Understandably, they didn't want to put Penelope Pussycat on a t-shirt.)

And, because Joe Dante already made the snotty Bugs-in-drag jokes in "Back in Action", so they needed a canonical steady girlfriend.
Top

Is that lola? It looked more live action then animated.
Top

That is so clearly Harley Quinn.
Top

And since I can't find which one you are talking about, I'd go with the Hagrid photo and say it probably is Harley, of Team Warner.
This sequel was never a "movie", it's a Warner franchise crossover-marketing strategy, and Ready Player One has gone to their head again.
Top

That’s a frame from the original, Eric. You know that.

I’m not totally buying that that’s supposed to be Hagrid, though. He doesn’t have the size...?
Top

At 2:05. someone in heels is standing next to bugs but the rest of them is cut out of the shot. Not sure if it's lola or a guest star.
Top
Post Reply
200 posts