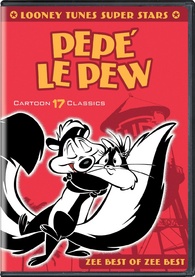 Naturally it's skyrocketing on eBay. Before the hoopla under $10, now $100 and climbing! Same for merch. I already own a few toys and like three plushies, but I've had my eye on the Funko Pop. Kept waiting for a good deal (fluctuated around $40) but now that would be considered a steal! I'm sure the price will go down eventually... hopefully. C'est la vie.

The mastering on those Looney Tunes Super Stars DVDs is really random. A few cartoons on each disc are even presented in 16:9 aspect (widescreen, with the top & bottom of the original 4:3 frame cut off).

From what I can tell, Pepe Le Pew has never been exactly 'lauded' in France; Tex Avery and Betty Boop cartoons seem to be placed on a higher pedestal there than Looney Tunes & Merrie Melodies.

Pepe has always been a 'minor' LT character by comparison with Bugs, Daffy, Porky, etc. His presence in Space Jam, Back in Action and even The Looney Tunes Show was also fairly minimal .. in part because of similar concerns regarding his characterization.

I don't necessarily disagree with Pepe being 'retired' from future LT projects .. nor with broadcasting his cartoons less-often, or at all.

But I don't think there's any point in altering the cartoons in any way; they're firmly a product of their time, and -- unlike the Dr. Seuss books -- were never intended by its creators to be marketed solely to children.

almost wholly unrelated: I recently bought The Sky's The Limit from Warner Archive because I had fond memories of watching the movie (which was the first Fred Astaire film I ever saw) on AMC, back in the 1980s .. and realized I hadn't seen it since then, as it'd never been on commercial home video.

oooooof. I'd forgotten (or ignored?) that Fred straight-up stalks Joan Leslie, throughout the first half.

I mean, yeah .. he's playing a pilot with just one week left on his leave, so he only has that limited amount of time to 'get the girl' .. but it's difficult now to see how Joan could've been anything but terrified of his attentions, if it were IRL; wartime, or not.

droosan wrote: ↑
March 11th, 2021, 7:32 pm
The mastering on those Looney Tunes Super Stars DVDs is really random. A few cartoons on each disc are even presented in 16:9 aspect (widescreen, with the top & bottom of the original 4:3 frame cut off).

Have to jump in here to say that, after 1956, the Warner cartoons retained their 1.37 Academy *negative* ratio, but were made "open matte" and supposedly safety framed for potential 1.85 showing, or 1.66 in Europe.

It’s true that, largely, this was mostly just done for the title cards and that the freewheeling nature of the production of these shorts "forgot" to stop characters from being cropped off, especially at the top, but they *were* shown in theatres at various ratios, actually more and more at 1.85, until the filmmakers learned to frame things better by the early 1960s, by which point any cartoon from any studio was making shorts this way.

Of course, when TV wanted cartoons, the entire neg was shown, which made mixing and matching the earlier pre-mid-50s shorts easier too, and home video followed suit. The "widescreen" shorts on those discs obviously used those cropped prints, or someone read the log sheet in the can and took the "safety for 1.85" info to heart!

The only other time the Warner cartoons were cropped was for the theatrical showings of the 1970s and 80s compilation features, again produced open matte but cropped — sometimes quite badly: I have an official "widescreen" VHS of The Looney, Looney, Looney Bugs Bunny Movie, and the framing is *awful*!

When Warners began to reissue the later old cartoons in theatres before their comedy movies in the 1990s for a brief time, the same cropped widescreen versions were used: I remember seeing one of the Hunting Season trilogy shorts on the front of a Police Academy sequel, again with the questionable framing.

So while those discs aren’t great for using the widescreen versions, they *were* actually shown this way legitimately, and not just some fake widescreen cropping done by some technician in a telecine suite, so they do kind of have some historical value, if misguidedly so.

The one I’d love to see is the late 60s "70mm blow-up" of Gone With The Wind, which totally threw out approx *half* of the 1.37 image to create a 2.35 epic Panavision ratio! Apparently it was an abomination, but I’ve never been able to see any examples, much as I would love to, and even the 60s reissue trailer on the disc is framed at 1,37, so was likely cropped in "flat" widescreen theatres. But I’d love to see frames or footage from the apparent 70mm print just to see how they did it and how bad it actually is!

Thanks for the info, Ben.

The 'widescreen' framing only appears for a few cartoons on each Super Stars disc .. and I hadn't discerned a 'pattern' to it, before .. but your explanation seems logical.
Top

And currently sold out/OOP on Amazon.

"Almost" bought it a dozen times, but...
Top

Will have both hand-drawn and CG looks... Called it!

Great posters, but kind of a shame, and a *little* "cheap", that they just cut and paste the exact same basketball pic in every single one!
Top

Maybe I should sit down and finally watch the original for the first time. Haha
Top

Better not...might put you off!

You know the drill: If there's a goofy overexposed movie you're unsure might stink to high heaven...let Honest Trailers handle it, and safely get the low-lights out of the way first:

It's almost become a running joke. Whenever a friend says they haven't seen Star Wars and I respond with shock, they will usually respond with 'Well you haven't seen Space Jam'. So many of my friends rave about the movie in terms of nostalgia.

In my defence it was released during my 'I hate basketball' stage of my life. Who knows I might enjoy it, I mean I ended up enjoying Toy Story after I got over my 'I refuse to watch anything with Tom Hanks in it' stage of my life.
Top

I’m pretty sure it’s the law.
"Yesterday is history, tomorrow is a mystery, but today is a gift--that is why it's called the present."
Top

If you were a 70's-80's kid, you watched the originals faithfully on Saturday morning, and couldn't be fooled.
Top

The weird thing is...I like Space Jam, but I hate Space Jam.

And you have successfully sold the movie to me. I'm gonna watch it during my current break from work. I survived Cats so surely I can survive anything else.
Top
Post Reply
200 posts