They have been hiding her in the trailers but the happy meal ad shows us our first look at this version of cindy lou. 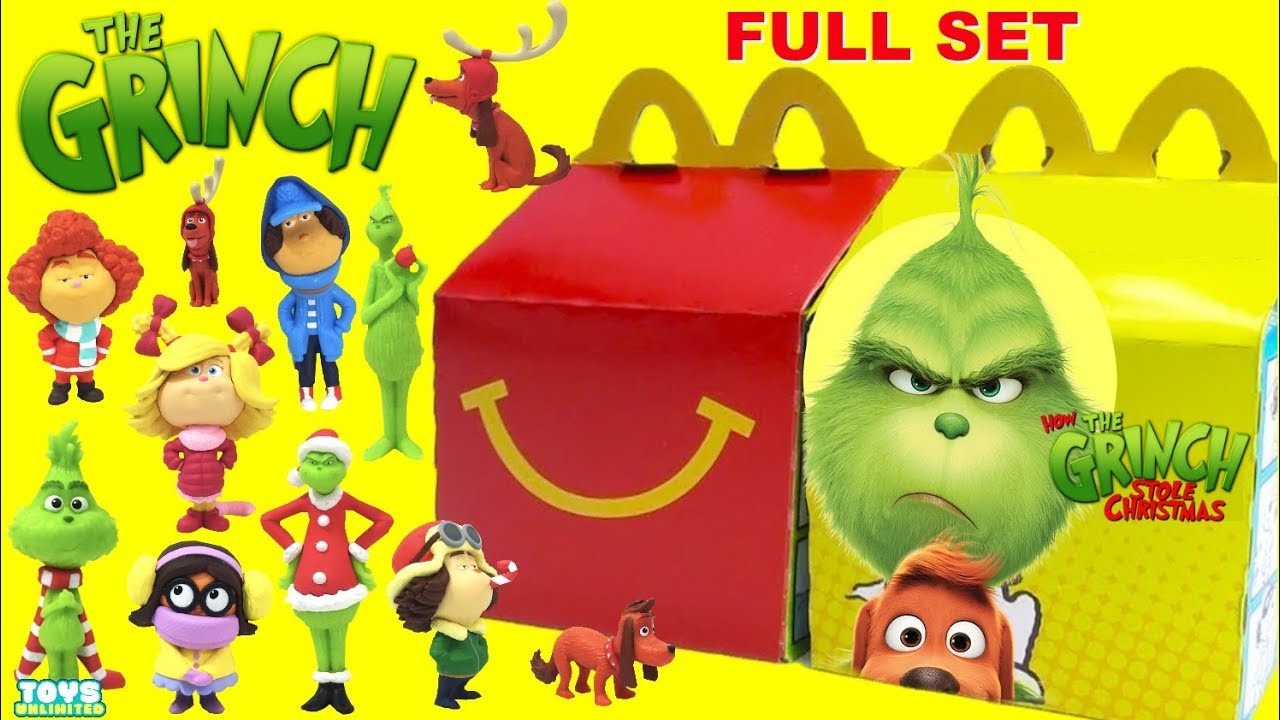 Yeah, the way Illusion's marketing was promoting "Wouldn't you love to be just like the Grinch?", and showing him as everybody's favorite party-pooping Gru from Despicable Me 3-1/2, I'm surprised Cindy Lou or the Seuss plot was still IN the movie...

But this is Illusion/whatever-used-to-be-BlueSky, so we mandatorily get the same cute lil' psychotic toddler who loves unicorns that was in Despicable and Horton.
Top

She is in this tv spot.

I don't think those toys are coming to the states.

But it also makes sense not feature Cindy prominently in the marketing, especially since she wasn't as major a character in the original book or special as she was in the Howard film.

(Pretty sure we have a Grinch thread somewhere, BTW, but I could be wrong?)
"Yesterday is history, tomorrow is a mystery, but today is a gift--that is why it's called the present."
Top

They confirmed she has a big role in the movie. Shocked fred the fat raindeer didn't get a toy. They been shoving him in all the ads and he got his own tv spot!
Top

I've seen a number of billboards for The Grinch along my commute through Hollywood. All of them feature a close-up of the Grinch, along with a caption that seems wryly targeted to specific locations ...

On a congested stretch of Fairfax Avenue:

(Grinch with fiendish grin) "I could watch you crawl through traffic all day."

At a notoriously terrible intersection wedged between the Hollywood Bowl and the Academy Awards theater complex:

(smiling Grinch) "I love it when this light turns green and nobody moves."

On a hillside near Universal Studios:


More amazing, however, is a giant billboard at the approach to Hollywood's tourist district (the Chinese Theater, Walk of Fame, etc) ... which -- until yesterday -- featured:

(smirking Grinch) "Oh, you're trying to make it in Hollywood? Let me know how that goes."

But as of today, now reads:

I'm not sure what the story is behind that change ... but overall, it certainly is an advertising campaign that stands apart from most.


If only I actually had any desire to see the movie.

droosan wrote:I've seen a number of billboards for The Grinch along my commute through Hollywood. All of them feature a close-up of the Grinch, along with a caption that seems wryly targeted to specific locations ...
If only I actually had any desire to see the movie.

And if only Illusion had the remotest clue what the story is about.

Illusion seems to be Millennial-humor hero-worshipping the Grinch as "Wouldn'tcha love to be mean to annoying people?", as he walks through Whoville the rest of the year popping balloons, spilling Starbucks coffee, dealing out party-pooping comeuppances onto annoying happy-moronic urbanites, and acting so much like lovable-villain Gru from the Despicable Me movies, that you keep expecting Pharrell Williams to start popping up on the soundtrack--
And THIS is apparently the reason he hates Christmas, and not because he thinks it's a "commercial" holiday before he learns his lesson? I'm....not quite following.

Dr. Seuss actually created the Grinch in an earlier magazine story, "The Hoobub & the Grinch": Seuss was still working in advertising at the time, and in the story, the Grinch is a slick, smiling salesman, who tries to sell the naive Hoobub on the idea that a 98-cent piece of string is better than the Sun--After all, the Sun only works part-time, won't work indoors, only comes in one color, and isn't portable!
When Seuss gave the Grinch his own book, it made sense that the Grinch was the same string-selling cynic who thought Christmas was a holiday where Whos went out and bought tringlers and trappings, and all you had to do to ruin it was take those things away.

This one feels so much like Illusion was down to their "Last two" Iconic Seuss Stories to exploit (they're reportedly looking at a Cat in the Hat do-over next), they've forgotten why they'd even started doing them in the first place.
And no, I've already gone into length about how they didn't have the first clue what "Horton Hears a Who" was about, back when they were still BlueSky.
Top

Might be the first Illumination title that I let pass me by...
Top

Ben wrote:Might be the first Illumination title that I let pass me by...

Ben wrote:Might be the first Illumination title that I let pass me by...

Why? Were we not supposed to?

The Grinch does feel wholly unnecessary. I can't say I'm too jazzed to see it. The Carrey/Howard version was already enough to put me off of seeing another feature-length version.
Top

Why? Were we not supposed to?

...Do you normally pay upwards of $10 towards things you cringe at?


The Grinch does feel wholly unnecessary. I can't say I'm too jazzed to see it. The Carrey/Howard version was already enough to put me off of seeing another feature-length version.

The Grinch feels like Universal trying to forcibly cement the Carrey/Howard version as "their" studio house-marketable Christmas Classic, and the proposed Illumination Cat in the Hat as de-historizing the Mike Myers version--
But both feel like products of Audrey Geisel saying "No more live-action!" after Myers' Cat, and Universal didn't want to "deprive" Illumination of one of its only two money-franchises (Seuss & Minions) just because they'd "done them already".

As for the Lorax, that one came out of a lot of jokes from the rush of live-action Seuss movies after Myers' Cat, and think Illumination just did that one because they Could. They probably would do a "Green Eggs & Ham movie" after we all cynically joked about that one, too.
Top

THR likes it, despite saying Horton was an Illumination movie:

What, what? Angela Lansbury is a voice in this? And Danny Elfman's back doing jingle-jangle Christmas music? I’m IN!
Top

Horton is the only Seuss film to not feel "stretched out" so far, and feels quite organic as a movie on its own. And I say this as someone who was more or less a fan of The Lorax.

Can't say if Grinch will be good or not until I see it, but the animation looks incredibly slick and sharp, more so than any film Illumination has made to date (except for maybe Sing, which is easily their most "grown-up" film if not their best).
"Yesterday is history, tomorrow is a mystery, but today is a gift--that is why it's called the present."
Top

I loved Horton, actually. Saw it in the theatre, on a plane out to the States, and again on the way home. I have Lorax on Blu but have never gotten around to watching. The more I hear about this new Grinch the more I think I’ll get the Blu. I loved Carrey back in the day but that film felt as fake as anything and not in a good way. The new one sounds like it’s actually a pretty good update, even if it does feel unneeded, ultimately.

I think I said in my review of Sing that Illumination has replaced Blue Sky and, mostly, DWA as the most visually consistent competitor to the Disney animation companies...and yes, I get that Blue Sky is technically one of theirs now, although I think they’ll get sold off or attempt a buyout, or simply become the new Disneytoon and make animation features direct for the streaming service.
Top

Ben wrote:I loved Horton, actually. Saw it in the theatre, on a plane out to the States, and again on the way home. I have Lorax on Blu but have never gotten around to watching. The more I hear about this new Grinch the more I think I’ll get the Blu. I loved Carrey back in the day but that film felt as fake as anything and not in a good way.

Both films had no clue what the original story was about:
In Howard's Carrey-Grinch, we see the Whos in shock to discover their Christmas has been stolen....Wwww-what??

(And, of course, Cindy Lou turned into lone PC-voice-of-reason Lisa Simpson, who gets to educate the town that the Grinch is mean because no one was ever nice to him! Which, from all indications seems to be the same route that Illumination is going, because they came from the same generation that grew up with Jim Carrey instead of Chuck Jones.)

Horton, OTOH, creates a hundred whimsical metaphors about "Believing in impossible rainbows and unicorns"...Which isn't even remotely close to what the politically leftwing Seuss wrote the book about.
Seuss, in the late 40's/early 50's, wanted to write an allegory why the US was turning a deaf ear to news of poor Russian peasants under Stalinist repression--which is why the Kangaroo not only thinks Horton is crazy for hearing people that "everyone knows aren't there", but a dangerous subversive, as well--and that all it takes for the world to become aware is for even the poorest little nobody in the corner to give up a "Yop"....Y'know, just any sound to be heard, not shouting it into the wind like Harry Potter. A person is a person, you know, no matter how small.
("They couldn't make a movie about THAT!" No, but Chuck Jones seemed to manage it nicely in a half hour. Maybe that's because Jones was close longtime friends with Seuss, and knew what the heck Seuss had been writing about in both cases.)

...But, Meledandri thought it was cute to put the furry-psychotic-toddler character in, to do the unicorn jokes.
Top
Post Reply
17 posts