Actually, not the worst I’ve heard, and not as bad as I was expecting given the clip name. A bit of coaching in that pre-autotune world, and he’d have been okay, or at least more than passable. The guy can actually hold a note, even if he can’t hit them all, which may have been helped by lowering the key like they did for the Beast's song in the live Beauty, though that led to that being flat and drab compared to Josh Groban's correctly pitched credits version. But...hey...sometimes acting a song is more important than perfect pitch to get the emotion across, and it can be better to have a heartfelt, gut-wrenching "bad" attempt than polished but emotionless perfection.

Of course they made the best choice for the movie (and it’s not like every other character in 1990s animated movies did their own singing either), but he’s not as bad as being made out, even for light-hearted reasons. He was untrained and had a tough song to nail on his first time out. It’s also a tradition that goes back to Deborah Kerr in The King And I, Natalie Wood in West Side Story, Audrey Hepburn in My Fair Lady, and countless others, so he shouldn’t feel too bad about it.
Top

Yeah, I thought he wasn't all that bad! We've heard worse.
Top

Aladdin seems to be doing real good in sales. Which reminds, I did see it again recently. Actually enjoyed it more. Still have issues, such as the "Speechless" song. I still say it's catchy, but feels so out of place... especially the second time where it feels more like a music video. I loved Dalia though, and her ending.
Top

I’ve had this for a month now, and still waiting for a slot I can run it in! And Toy Story 4 showed today...and that’s not scheduled in until December 3rd! That’s going to be an agonising wait!!
Top

I suggested watching Aladdin as a family movie night at home this weekend. The wife and son were eager, the daughter had zero interest. Me? Morbid curiosity.
Top

I kinda liked it. Despite, well, nearly everything!

Wobbly Genie CGI. Will Smith showing he's a much better rapper than a true singer. That WTF "Speechless" reprise. (Seriously, what was that supposed to be? My son said, "What is supposed to be happening here?") Underpowered Jafar (I didn't mind the performance, really, but he was too young and his voice not deep or scary enough). Guy Ritchie often forgetting what a dynamic director he can be (besides some weirdly cool overcranked shots in the opening number). Some clunky editing and dry staging. And that sense that what works in a cartoon doesn't quite work in live action (Flintstones-itis.) And some scenes - like in the cave - were too under-lit, especially for the 3D to be effective.

But there is something there. There is a good, fun Disney flick trying to show itself. The ending chase was wild and fun. The humour hits more often than not. Naomi Scott probably saved the film for me, despite my not caring for how they handled her costuming and hairstyling. Scott has a tremendous voice, and has an engaging presence--- she may have a great career ahead. "Speechless," especially in its reprise, may have seemed out of place, but Scott could sure belt it out! Mena Massoud did pretty well, being likable and carrying the singing well enough, plus showing some great dance moves. Smith was pretty good, and rose above the dodgy CGI. And I liked most of the changes and additions from the original. Even the Genie's love interest was okay. (Actually, she's adorable, if perhaps a bit too contemporary feeling.)

So, better than the sum of its parts, I would say. And soooo much better than BATB. And, a notch above the London Aladdin stage show, which was a bit underwhelming despite its solid cast.

Can't wait to hear what Ben thinks when he sees it.
Top

So many mirrored thoughts!

With Jafar, think I was more disappointed because I had live action comparison thanks to Once Upon a Time. Here's a random clip of the second actor:

Wasn't a fan of their Aladdin, Jasmine I liked but Jafar was perfect. A missed opportunity I think not getting him back or getting someone with as much presence.

Funny watching that again with the movie in mind, despite how cheap the Cave of Wonders look, I think in some way it's more appealing!
Top

How bizarre! We just arranged a last-minute impromptu screening tonight and had a packed audience who all enjoyed it.

Well, I was just pleased that it kind of...didn’t suck!

Genie was so much better than the clunky CG in the trailer, though none of his Williamsisms came close to matching, besting or even being good in a different way. BUT when this thing went its own way it really worked, and I really liked the extra character bits of business. The dark lighting was a tad under lit, but watching in HDR it did kind of make all the glinty things glint a little more, though the cave still looked more than a little dull.

I pretty much agree with comments made above, so a bit redundant to repeat, but I did also feel it was at least a notch if not a fair few notches up from the stage production, though I did like some of the lyric changes in that and the additional opening to A Whole New World that I think would have really worked well here.

But...yeah...it didn’t stink, and that’s a good thing. It wasn’t perfect, and by any means, but it had some good stuff in there. Even Prince Ali in context didn’t look or feel so cheap as it did in the clips. I loved the reprise I’d Speechless (the first time didn’t feel like a real song; I did think "is that it? That’s their big new song?") but it was very strange with everyone disappearing as they did. I clocked on pretty quick, but they needed an earlier wide shot to show more crowds evaporating to sell what was happening. It was only after the Snap on the second bunch of guards, which happened quite a long time after the first pair, that I got the idea, solidified when it cut back to her at the end. To make it clear, I loved the fuller version of the song, but the sequence was odd and a real showstopper in the worst sense, grinding things to a halt at the wrong time.

But the movie didn’t completely suffer from that, and picked up again soon after, working its way to a fun end. I even liked Jafar, and thought th choice of moving away from an overtly theatrical villain worked. Yeah, he could have been more overbearing, but with th snake motif he was obviously someone to slithered his way up the ranks and so was better served by being understated in a live-action context. Thought the Carpet Animation was sublime, and Abu every now and then looked terrific. Iago was great too, and so pleased they didn’t make him a human subservient as in the stage show.

Despite the fact that the 1992 film is perhaps my favorite of the 90s films, I do have story problems with it, and those were carried over into this one along with a couple more "whats!?", though it was good, fun, sometimes grand entertainment that looked and sounded great (though anyone else notice all the strings seem to be planted in the left speakers? I had to check my settings as everything seemed so left-biased).

In the end, we had my pal and his kids over for it and they loved it, of course, with me thinking that as a family movie it was really top-notch, occasionally along the lines of an old school Disney blockbuster, as the much-maligned but actually pretty awesome Alice Through The Looking Glass was. I’d be up for a second of these, as long as they kept that feeling intact.

I could maybe forgive wimpy Jafar if he had just turned into a snake!

That Speechless reprise is just so bizarre. I absolutely loved the performance, and went back and re-watched it a couple of times - great job, Naomi! But the execution direction-wise should have been better thought out. As Ben said, by the end of it, it worked well, but getting there was disorienting. There really needed to be a "freeze" for a moment, or a colour shift, or some initial over-cranking… anything to indicate it is a "fantasy" sequence. As is, it just plays out nonsensically, until one realizes what is happening, and I'm not convinced it was intended to be that way.

But nice that a few of us did enjoy the film, despite its faults. With expectations now properly set, I may enjoy it even more the next time I watch it. I would still have preferred a stronger Jafar, though.

In terms of a sequel, the genie ends up in a different place in this film than he did in the original, so... it's unclear how a sequel would work. That would be a challenge for the screenwriters, though certainly a surmountable one.
Top

Easy, a time jump! That way Dalia could return, too.

With Jafar's parting words "I will not forget what you have done to me, boy", I think they had an inkling a sequel could be a possibility. I'm totally up for another round! Without the burden of choosing how much to remain faithful to the source material, there's so much possibilities.

I think I said it best regarding the "Speechless" reprise, it felt more like a music video.
Top

For Your Consideration is up: 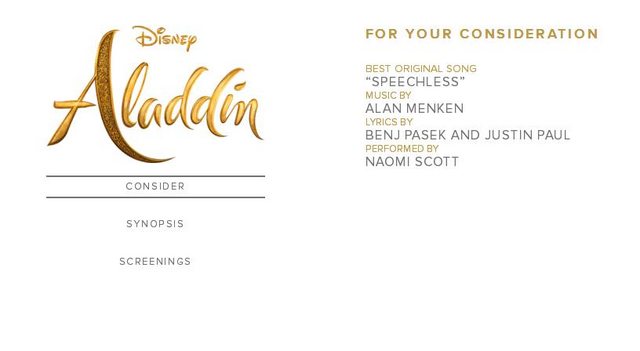 I'm speechless that's all Disney is aiming for. I would've thought Costume Design for sure.
Top

I think they’re just being realistic. Usually the power players actually have FYC plays built into their contracts, so I’m surprised that they’re not obliged to suggest the usual Best Picture or Actor accolades, but I guess they also know that this is a franchise picture, and going for what they have an actual shot at. Although, yes, I am surprised that Costume, Make-Up, Design, etc, aren’t being courted...
Top

Congratulations are in order! Aladdin won the People's Choice Award for Best Family Movie of 2019! It beat out The Lion King and Toy Story 4. Woot!
Top
Post Reply
99 posts