Here's the latest synopsis for the film:


Collider wrote:Emma Thompson is in early talks to join Emma Stone in Disney’s live-action movie Cruella, which tells the origin story of 101 Dalmatians villain Cruella de Vil, Collider has confirmed. Craig Gillespie (I, Tonya) is directing from a script by Tony McNamara and Dana Fox. Marc Platt and Kristin Burr are producing along with Andrew Gunn, and Disney will release the movie on Dec. 23, 2020.

Set in London in the high fashion world of the 1970’s, Cruella finds Stone playing a brilliant clothing designer who nonetheless toils as a lowly department store worker. One day, a posh woman known as the Baroness enters the store, wearing Cruella’s special locket that was given to her by her mother — one that Cruella lost on the same night her mother passed away at the Baroness’ estate. She promptly decides she’ll do whatever it takes to get her locket back from the Baroness, including crashing her glitzy ball.

In the original 1961 animated classic, Cruella was a villain obsessed with capturing the titular dogs, and the new film will explain why dogs are so important to the character’s backstory.

Thought Glenn Close made a good Cruella and would be hard to top, but Once Upon A Time proved me wrong! Their Cruella was perfection. Great backstory and the actress was dead on. Loved her! That's going to be a tough act to follow.
Top

Joel Fry has joined the film as Jasper.
Top

The film has been delayed until May 28, 2021. In a way better, never did seem Christmasy. It's just so far away!

Another benefit of the move -- that year happens to mark the 60th anniversary of the animated classic! (25th for the first live action movie.)
Top 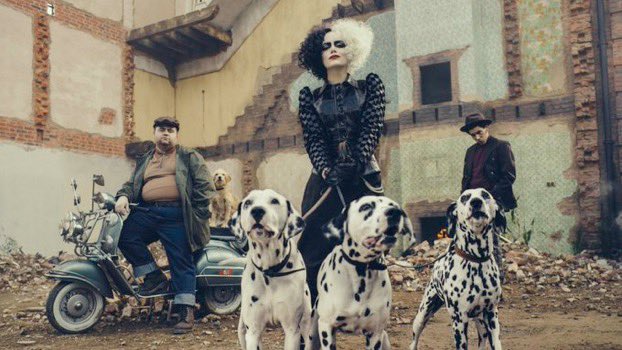 Horace and Jasper are right on the money, but Emma looks unrecognizable. Reminds me of Effie Trinket from Hunger Games or Sia even. Eh.
Top

Seriously, though, this reeks of what we see in prequels/Legacy-quels, namely "Overcompensation":
When a new scriptwriter feels an obsessive need to answer an old-movie backstory question nobody ever asks, and is so pleased that he came up with a plausible enough Made-Up-Crap explanation on his own--usually a wrong one--the script becomes monomaniacally OBSESSED with it to the exclusion of all else.
(Like Dean Devlin wanting to make absolutely sure we know that Godzilla ate tuna, or Tim Burton needing to establish Willy Wonka's childhood with a dentist dad.)

Here's a good illustration of Overcompensation, for example:

Daniel wrote: ↑
July 30th, 2019, 1:23 pm
In the original 1961 animated classic, Cruella was a villain obsessed with capturing the titular dogs, and the new film will explain why dogs are so important to the character’s backstory.

(--Um, ISTR the original movie character saying she just wanted their fur? Think she mentioned that a couple of times.)

Therefore: Why does our villain have such an implausible name as "Cruella", and wear salt-and-pepper hair?
Because she was inspired to turn bad, and met her henchmen, by falling into the punk scene in 70's London! Just like Sid Vicious and Johnny Rotten!

I just love the reactions to Stone as Cruella. Whatever else did anyone think Emma Stone was going to look like with black/white shock-hair and de Vil makeup!?!!?
Top

For me personally, wasn't expecting her mop to look all frizzy and clown like.

Doesn't help that Victoria Smurfit's portrayal is still so fresh. Like seriously, she was spot on dahling! Not only the look, but how they wrote her. She was pure evil with no redeeming qualities. This version looks like they're going for the sympathetic backstory route. That treatment is to be expected, will just depend how they go about it.

Ben wrote: ↑
August 25th, 2019, 4:57 am
I just love the reactions to Stone as Cruella. Whatever else did anyone think Emma Stone was going to look like with black/white shock-hair and de Vil makeup!?!!?

...Well, for one, I didn't think she'd look like Dr. Frank N. Furter in an Edward Scissorhands suit.

Also, like most "Villain origins", they have to show the villain as once a good character, who worm-turned to villainy after nobly fighting back against someone EVEN WORSE!
(Y'know, like how Hannibal Lechter discovered that wearing face guards was cool, after his fascination with Japanese warrior masks led him to protect his girlfriend? Or how Venom was really a nice guy pursued by an evil corporation?

So...NOT that she was just a spoiled selfish Tallulah Bankhead, then, but was really trying to get back the loyal dogs that her terrible childhood trauma had taken from her?
Yes, I know the project's been around since the days of "Maleficent", but ISTR, weren't we laughing at that one, too?
Last edited by EricJ on August 25th, 2019, 8:23 pm, edited 1 time in total.
Top

I'm actually much more on board with this than I had been beforehand. Stone looks cool, and it seems like she'll be able to pull the character of.
"Yesterday is history, tomorrow is a mystery, but today is a gift--that is why it's called the present."
Top

Speak of the de Vil, Victoria tweeted out this:


Hey all oncers I love and appreciate all the love for my #Cruella but you gotta know #emmastone will KILL IT. Let's get behind her and @DisneyD23 new #cruella! I ship #GlennVicEmma darlings

She's not wrong. I actually like Emma and curious to see what she'll bring to the role.

Emma Stone is brilliant, period. While I’m not sure she’s a perfect fit for the character, I have no doubt that she will find the right take (or else she wouldn’t have said yes) and knock this right out of the park.
Top

Pictures of Emma from the set: 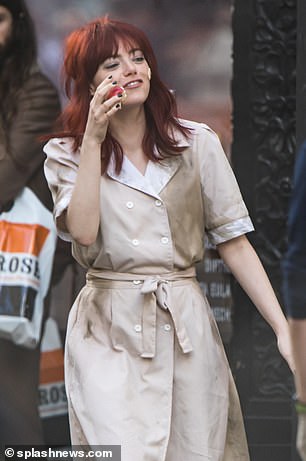 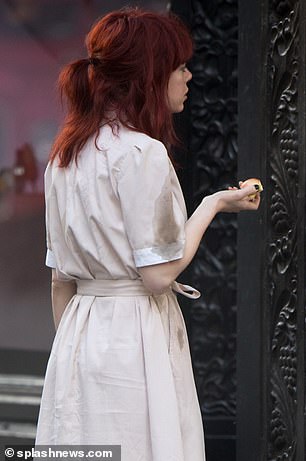 Hmm.. so a redhead before she goes full on Cruella. Interesting. Think she looks great. Now to wonder how and why the hair color change. A simple dye job or maybe some type of electric accident...?
Top

Yeah, I’d go with some kind of physical or psychological shock.

Daniel wrote: ↑
September 5th, 2019, 3:12 pm
Hmm.. so a redhead before she goes full on Cruella. Interesting. Think she looks great. Now to wonder how and why the hair color change. A simple dye job or maybe some type of electric accident...?

Well, just like the Joker had to be poor, struggling lil' "Arnold Fleck" before his new socially-expressive makeover

, young Cruella has to be a poor, mousy downtrodden fashion assistant before being traumatized into discovering her liberating inner London Punk.

As Dacey would say: