No! I was impressed that someone had bothered to go back and find an earlier thread than post a new one, exactly as you intended, hence the "well done"!

Back to Cindy - didn't the last release have a new restoration?
Top

I think it did, although Duster says otherwise.

Here's the Press Release. One of the new bonuses:


In Walt’s Words: Enhanced Edition – Watch the movie and gain some insight into its production with storyboards, archival photos, sketches and transcripts.

Sounds intriguing... in a way. Depends. Doesn't take the place of a real audio commentary of which Cindy is certainly worthy of.
Top

Hey...from your past...I have come back...because it's that time again...when Cinderella releases...for what will probably be the final time, thanks to Disney+.

Cinderella will be released to digital June 18th and disc June 25th.

It will come in a standard edition with a pretty cover of her running....and nicely stopping to smile at us, at midnight: 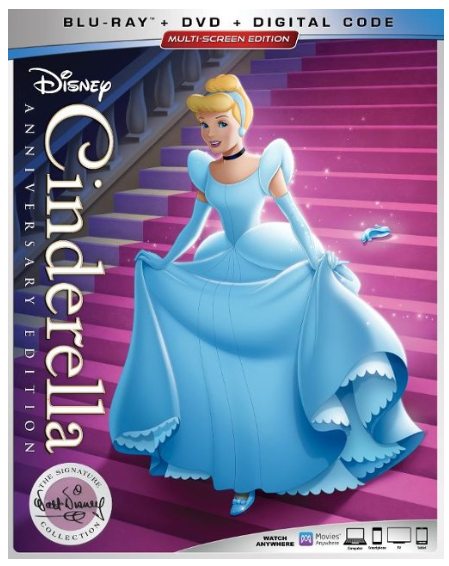 Target will be selling it with an exclusive cover that is even prettier with her stepping out of the coach and a nice book to go with it: 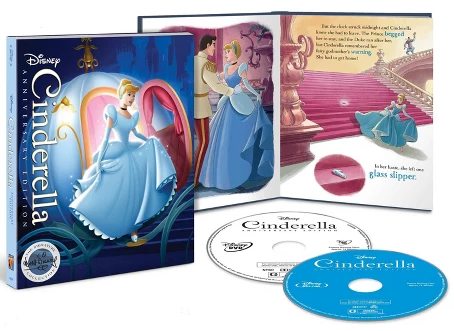 Best Buy will be selling it in a pretty (but re-using some old clipart, just in black) steelbook cover:

The 2015 live-action remake will also be released again, but in 4K, with a standard cover: 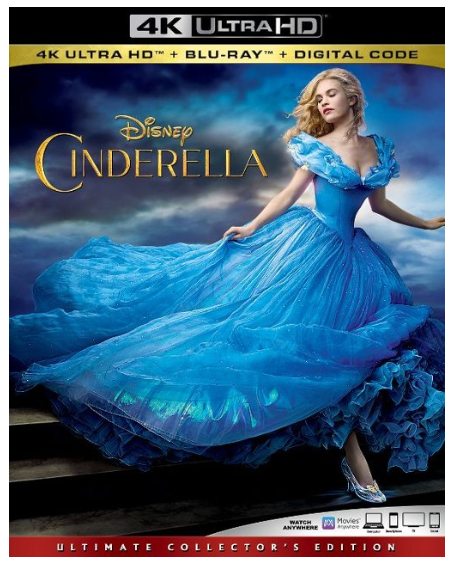 And a Best Buy steelbook cover: 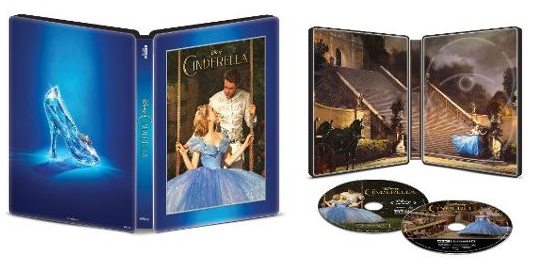 The new bonus features for the animated Cinderella will have what sounds like an audio and visual commentary, trivia with Disney Channel stars, and pencil animation! And I asked and prayed for pencil animation! Hopefully of the transformation!

The last, Diamond, Blu-ray, DVD, and digital relase seems to have had the same restoration as the Platinum DVD release, as evidenced by this video, though maybe it has ever so slightly brighter colors:

Thanks for sharing the various covers. My favorite would probably have to be the Target edition, very beautiful!

Neat video. Wow! Really fascinating to get an idea of how each release varies. Just amazing how they were able to, so thorough! The DVD version sure hasn't aged well...
Top

Daniel wrote: ↑
May 29th, 2019, 7:10 pm
Thanks for sharing the various covers. My favorite would probably have to be the Target edition, very beautiful!

It is very nice--I should know, I bought it back in 2012.
They also had Target-exclusive books for Peter Pan, Aladdin, and Little Mermaid, but I'd already bought the 3D version of the latter.

And like most studios still coming to grips with having to give up on "Disks are dying!" in the ruins of DMR, Disney still has most of its big disk releases set through their Disney Movie Club--
Also in response to the recent closing of The Vault, to prepare for the classics streaming on Disney+.

Not sure how that's going to affect the rotation chronology, but think Jungle Book's next?
Top

In response to EricJ, even though Target gave Cinderella a book in it's 2012 release, this time it will actually have a different book. You have to look at the pictures.

re: the video comparison of "all releases" .. they left out the Laserdisc format, entirely! In addition to the movie, you got a separate LD with bonus features, a full-size hardcover, dustjacketed book (exclusive to this set), and a four-panel print featuring the 'process' of Disney animation: story art, rough drawing, cleanup drawing and final cel with effects. All of this was contained in a sturdy slipcase-style box with velvet-like lining; the artwork on the box's front cover was slightly raised, and the title embellished with gold trim .. overall, it had a very 'luxe' vibe.

Unfortunately, I sold my copy when I liquidated my Laserdisc collection, some years back. But this was one of the LD sets I'd strongly considered keeping .. mostly just because the packaging was so nice.

But I wouldn't necessarily recommend seeking it out .. unless you don't mind Laserdisc's 8-track-style need to change sides, every 30 minutes.

(I kid; I loved Laserdisc .. but I actually don't miss that part)
Top

The 90s LDs has the best colouring of all, faithful to original prints but not so digitally scrubbed so as to feel like a DTV sequel.

I was going to mention the missing LD here but didn’t think anyone would have access to one anymore! I adored LDs and was lucky to be able to keep all the big titles and sets like these. I didn’t even mind the side changes...my pals and I thought it was actually pretty cool to be living in the future where movies came off a "laser disc"...how cool!

Yeah, Dusterian, it's nice to hear from you again. Hopefully you'll stick around a while.

It's nice to still have all those LaserDiscs for alternatives to the oh-so-clean/recoloured HD images. And I still enjoy the side changes, in a way.
Top

Hello ShyViolet and Randall! And Ben!

I will try to stick around but, alas, I am not interested in general animation. It usually has to be some fantasy story. But I do love very critically acclaimed animation, too! But it's really nice to see all of you again.

LDs look like they rock! But I had the Masterpiece Deluxe VHS Cinderella set that was the LD set but VHS of course.

I'd tried to make it very clear that I was mostly kidding about my LD side-changes 'dig' ..

But, yes .. Laserdiscs did, indeed, rock, especially by comparison to VHS.

But -- as this is a Cinderella Blu-ray discussion thread -- I'll just leave it there.

on topic: I see the live-action remake of Cinderella is being released on 4K Blu-ray .. why no 4KBD of this Platinum Edition of the 1950 animated feature? Seems like it would be a logical follow-up to the recent 4KBD of The Little Mermaid.

Yeah...I did pick up on your side change vibe. Just wanted to point out that I didn’t mind the changes against the other benefits. In a way, I preferred the "coolness" of what was happening over a DVD layer change, when everything randomly freezes for a couple of seconds!

I can only think that they haven’t announced a 4K C50 because the 4Ks of Lion King and Mermad didn’t sell that well? Or maybe because they don’t have a fresh 4K master like that had for those films? Perhaps a combination of both? Apparently there is a newer scan that fixes the colors, and that has been rumoured for this, but who knows what we’ll get!?

I don’t think they’ll issue this and then announce a 4K, like they did with Lion King, but again...who knows...?
Top

Yeh, I figure it's probably just lack of a 4K-ready master being at hand.

btw .. the 4K UHD The Little Mermaid (and its accompanying 'standard'-HD Blu-ray) fixes the shot swap of Ariel & Flouder in the "Part of That World" scene. It's worth a 'double-dip' purchase for that alone, IMO.