Neat segment on all times the original Twilight Zone was referenced in The Simps!

(Well, ok, not ALL, after all it’s only ten minutes lol.)


For some reason they leave out the evil Krusty doll one...kinda puzzling as I always felt it was more of a Talky Tina send-up than Chucky or whatever. Lol. Plus, I dunno why they don’t mention the 1982 Poltergeist, which was very much inspired by “Little Girl Lost” from the original Zone. At least they do acknowledge Homer 3 as an update of LGL!

Yeah, very odd omission with Killer Krusty. From the same segment when it shows Krusty in the dollhouse, I always felt it was a nod to "Miniature".
Top

Wow great catch Dan, after all these years I’d never even considered that!!

Yeah, plus Krusty even says: “My name is Krusty the Clown and I don’t like you!” just how Talky Tina did. So it is pretty strange. I mean, “Here’s your problem, someone set this thing to evil” is one of the most famous lines in the show! (And in pop culture in general!)

(I always wondered, why was there an evil button in the first place??? Also love how Evil Krusty had sharp teeth to distinguish him from “our” Krusty, and then had normal ones after the tech guy flipped the switch lol.


Wikipedia wrote:Krusty bearing sharp teeth and wielding sharp weapons are references to the third segment from the 1975 ABC Movie of the Week, Trilogy of Terror, starring Karen Black.

Ending of “Eye of the beholder” from original series. I never get tired of it—next to what happens to Jerry Etherson in The Dummy it’s my all time favorite “twist.”

Amazing re-mastered HD trailer of the original 1982 Poltergeist, which very much referenced the “Little Girl Lost” episode from the original TZ. (OK well, except for the parts with the giant killer tree, murderous clown doll and zombies rising from underground lol.).

Actually (IMHO) this film evoked Serling’s original Zone series far more than any other incarnation/remake/imitator. (Including the TZ anthology film that came out one year later.).

The terror, wonder, and overall visceral EMOTION of Serling’s best eps (so many of them had a cinematic quality, yeah, even the ones shot on video) is so plainly all there. The building psychological horror of the Tree/Clown doll/rancid meat sequences very much echo Serling’s scariest moments. The medium Tangina’s mystical, incredibly moving “Now let’s go get your daughter” monologue is equal to any of Serling’s beautiful/terrifying prose in episodes like, “Eye of the Beholder”, “Walking Distance” and “When the Sky was opened.” (Makes sense since Serling gave Steven Spielberg, who I guess you could say, “ghost directed” this film, no pun intended, his big break at 26, directing the pilot episode of “Night Gallery,” with Joan Crawford.)

Anyway, just how I feel....I’ve seen a few eps of the 80s Zone remake as well as The Outer Limits from the 1990s, and just never took to either of them. Haven’t seen the newest CBS: All Access version, so I can’t comment on it. To me Rod’s show was just kind of a “lightening-in-a-bottle” type thing.

Oh, kinda random, but the trailer narrator’s “And the games are over” line is about the most 80s-cinema-commercial type phrase you will ever hear in your entire life. Monstrously cliche, but so epic at the same time. Lol.

Remember that this also came all around the time of the Zone movie, so it was all "in the air" around that point.

I caught Poltergeist on TV the other night, and it looked a stunning print. This is one I have on DVD but never got the Blu-ray, but I wonder if a 4K is in the works? I can just seen WB announcing that for Halloween, either this year or for the 2022 anniversary...

Remember that this also came all around the time of the Zone movie, so it was all "in the air" around that point.

Yeah...that’s true. It just has such an 80s overkill vibe to it though. Kind of like how every superhero cartoon back then actually used the phrase: “the forces of evil.” Lol.

Well the CBS Zone remake came to standard telly here tonight, and...not impressed. Too long at an hour an episode, and the smartness doesn’t seem to be there. I saw the second and third shows tonight: a 20,000 Feet redo (as 30,000 Feet) which wasn’t the same story and had a really dumb "twist", and one called Rewind, about a magic video camera that again was half-baked as a spookfest and seemed more interested in being a BLM allegory, and quite a pointed one at that, which I guess is actually the point, but to the detriment of being anything that belongs in the Twilight Zone dimension in the first place.

I may try and catch some more, but I can’t say either had me gripped, and I got quite bored towards the end of both. Also, Peele isn’t the guy to hold this show as host. Why does he need to be on camera? Serling's narratives were best because he was the voice of the Zone, and not having a physical body or visual presence gave it an otherworldly or almost "authoritative being" feel. Here, the host doesn’t have the weight, in a gravitas sense, and just comes over like an old fat dude trying to sound mysterious and (turn away from camera then back again) coy. Not really a good look!
Top

Season one was pretty meh. Too preachy and blunt.
Top

Saw this while browsing Etsy: 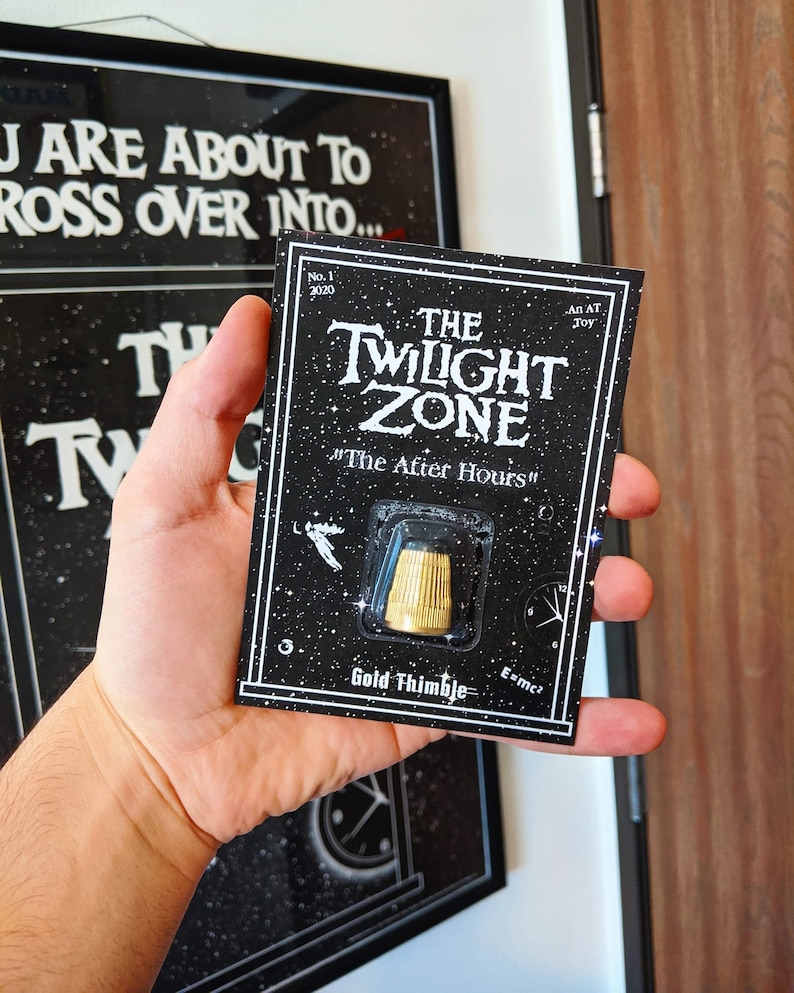 And interesting on the new Zone. That definitely correlates with stuff I’ve read. AND AN HOUR LONG??? That’s ridiculous—the 22-minute economy of each of Classic Zone’s eps is a huge, huge part of why they absolutely ruled. (And hey, Rod tried that too in Season 4 and unfortunately it was none too successful.

(This is from CBS: AA, so it‘s actually pretty well done.)

Interesting on how Monsters are Due on Maple Street was originally going to be re-made by Spielberg for the 1983 Zone movie. Reflecting on it now, it almost kinda seems like the anti-Close Encounters lol...a few blinking lights and strange occurrences don’t lead to enlightenment for humanity like in CE, but to humanity destroying themselves because of envy and paranoia! How would Spielberg have handled this?? I guess we’ll never know.

Re: the YT vid

The narrator mistakenly says that only women in “No.Twelve Looks Just Like You” are required to have the transformation, when in the actual episode it’s definitely made clear that men are also forced to undergo the procedure.
Hello, Mr....Kerns! I bad want money now. Me sick.
Ooh, he card reads good!
Top

ShyViolet wrote: ↑
August 25th, 2020, 6:39 pm
The narrator mistakenly says that only women in “No.Twelve Looks Just Like You” are required to have the transformation, when in the actual episode it’s definitely made clear that men are also forced to undergo the procedure.

And neither one is "forced", it's just society's peer pressure.
Top
Post Reply
153 posts