A new series is in the offing! Bad news -- it's only for the upcoming Apple TV+ Good grief.

Still, here are details and trailer for Snoopy in Space:

Looks pretty cute. Voices sound pretty good too. Would likely watch if I could...
Top

"It's Another Re-Release, Charlie Brown"... The holiday specials are once again being released: 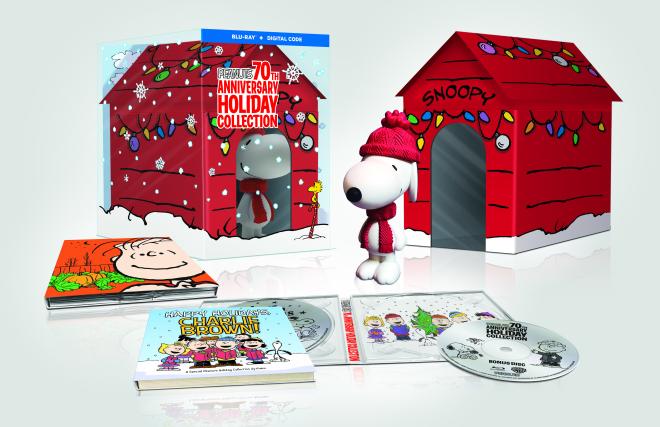 Yeah, pass. I don't want the gimmicky packaging or Snoopy figurine. Especially if it's going to cost $99! What's that Snoopy made of!?

The book might be cool and the digipacks look very nice. New this time around is a featurette and audio commentaries for the three main specials. Curious who took part in them.
Top

No way am I getting this, but I could use a Snoopy figurine.

However, I am not a big fan of cumbersome packaging. And that's not as nice as the German doghouse:

It's amazing how many times they can go to the same well with these releases. And what excuses they'll use. 70th Anniversary? The strip came out in 1950, so this release jumps even that gun by a few weeks.
Top

And unfortunately, Warner's script says that the "Decade" Complete 60's and 70's DVD collections of the non-holiday specials "flopped", so we'll never see those on Blu-ray in our lifetime. Even just to break up the variety.

Not that we've learned to expect Warner retail physical-disk releases WITHOUT dollhouses or statues, that is.

Hence the value, 'coz it’s not like the box is going to cost anything to make!

That German set does look a little nicer. I just wish they went for something more formal. Maybe a simple slip covered with comics depicting the specials or since it's pushing Christmas more, make it look like a present with their heads acting as ornaments. Something less clunky...
Top

I expected as much, but always nice to have confirmation. I'll be there to see ole Chuck get his rock.

The second broadcast will be followed by You’re Not Elected, Charlie Brown.

Well, nice to see it restored--
I've still got the Blu-ray release from '08(? - or was it '12?) when Warner thought they'd cash in on the election year by squeezing out their own "Elected" disc, and Pumpkin was paired with "It's Magic, Charlie Brown" instead.
Have more recent releases corrected this, or is Warner still going with the one master they made, rather than do another one?

(And just recently, on one political discussion, I'd joked about a rapidly melting-down Trump trying to "lead" the Republicans against impeachment sounding oddly like Linus deciding to address the class voters before election with a few words about the Great Pumpkin...."AAAUGHH!"

Here's the opening as it originally aired:

Such an awesome gem.
Top

Charlie Brown Thanksgiving will air nov 28th. It's the last thanksgiving special airing on a main network in primetime. (I miss Garfield thanksgiving!)

"He's all yours, Priscilla."

Goes without saying I'll be watching. It's tradition!
Top

As noted on the front page, Lee Mendelson passed away on Christmas at the age of 86.

I saw him at Comic-Con 2008, one of many thrills I had that trip. The guy produced a whole lot of great TV.
Top

Mark Evanier posted a few stories about Lee on his blog. Keep scrolling to get to them all.