Its not much, but here's a little info from the Va of Amy.
Top

What's key is this passage from the interview with Lauren Tom:

"returns with four DVD movies, which will also be reformatted as 16 new episodes, to air on Comedy Central next year. "


It's a glass half-full thing. We're getting the extended editions/director's cuts AFTER the original releases (on DVD) but I gotta say it kinda stinks when things like this happen.

Ah well, the sense I get is that the production personnel are more juiced up for Futurama at any rate. It's almost gotta be better than Simpsons at this point in time because everybody's overly familiar with Simpsons...

There is a clip up on YouTube taken from the San Diego Comic-Con Futurama panel. Probably from the direct-to-video movie release coming out later this year.

UPDATE: D'oh! I missed the link to the video on the front newspage.

You're not really surprised, are you?

There's no way they can justify four DVD "premiere movies" when they can split them up down the line for TV, so they're not showing the "original movie" that could then cause a fuss for those who shelled out for them...
Top

Ben wrote:You're not really surprised, are you?

There's no way they can justify four DVD "premiere movies" when they can split them up down the line for TV, so they're not showing the "original movie" that could then cause a fuss for those who shelled out for them...

BUTTTTTTTT, Fox got away with it on The Family Guy Movie so obviously they think it'll work again with Futurama.

There'll be enough people who'll eventually catch on to this, though.

I don't think Fox will get away with this completely without catching some Holy Heck for it.
Top

Well, I don't know about the States, but the Disney DTVs certainly play in almost constant rotation on the Disney channels here. "DTV" is a nice, cool souding term, but these are made and always ultimately intended for the TV market, hence the perfectly placed commercial fadeouts...!
Top

The States are more or less the same. Most of the time though, they air the DTVs on Toon Disney; Disney Channels sister network.
Top

Nah, it's ultimately in Fox's lap.

They're the ones who are being such cheapskates about this. Fox funds the show and ultimately controls where and how the footage ends up being used just like any other TV series.

Honestly, the more time goes by and the more I see of Futurama, the more tragic I think was the decision to bring Family Guy but DROP Futurama like a cold wet stone.

Sure, a more popular -- perhaps less expensive -- show was brought back, but the show with greater possibles IMHO was dropped like a red-haired stepchild.

Unless the DTV movies do really well, and the rebroadcast on Comedy Central is a smash hit, I think Futurama will die a second final death.

They will be 4 DVD movies chopped up into 3 episodes each totaling 16.
Top

Looks like hermes will have a fatal accident in this one. 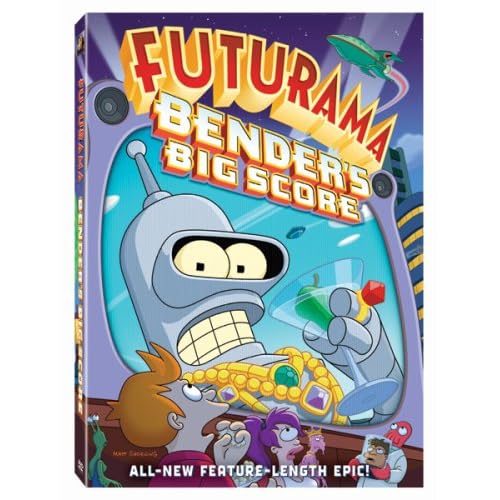 Hmm, sounds original. I wonder what happened, for him to end up like that...
Top

Great news here about Futurama coming back! Just hope that when they start broadcasting the new series in the UK, it's going to be on Channel 4 or FX or something like that (I don't have Sky One, I'm afraid to admit).

And as for the upcoming movie, I'm really looking forward to how that turns out. Does anybody know when the movie's coming out on DVD in the UK?
Top
Post Reply
112 posts