It’s the same thing, though. You’re really only paying each month to *rent* a library of content options.
Top

Not for EVERY movie, though.
That's why some people go to a la carte restaurants, and some go to all-you-can-eat buffets.
Top

Yes, every movie is only "rented". They can take off whatever they want whenever they want, just like a store retiring an old worn out tape. Streaming is only good for what is available at the time, and you’re only renting access to what is available. You don’t own a thing, not even a single movie.
Top

I think what will be most interesting to see is if they expand upon what they did for Endgame, which was add extras that would be exclusive to the service. In this case, I believe they threw in five deleted scenes that weren't on the blu-ray.
Top

Randall wrote: ↑
November 14th, 2019, 7:55 pm
Beware: The Black Hole Blu-ray was initially released with an authoring glitch that made the overture unplayable. You may not care, but a fixed disc is out now. DMC just let me know that my (and Ben's) replacement is on the way. I wasn't overly bothered, really, but it's always nicer having the WHOLE film available to view. And yeah, with D+ now, it's almost a moot point.

I guess I lucked out .. the Blu-ray I'd purchased on eBay plays the movie complete with the overture.

A couple of years ago -- when I was 'between' jobs -- I built a CG model of V.I.N.CENT .. I slapped some temporary textures on him (just 'solid-color' maps, actually), and set him aside. As I am 'between' jobs again, at the moment .. I'll probably use this Blu-ray as reference to create some proper, film-accurate texture maps for him .. and might even build a B.O.B. or Maximillian, for him to hang-out with .. Yeah, lucky you didn't get stuck with a first pressing copy.

And truthfully that meme is why I haven't signed up to Disney+ yet. There is nothing on there that I would watch that I c can't pull out from my DVD collection. Not saying I won't ever sign up but I'm not in a rush to sign up. Might wait until here is more original content to justify the extra money coming out of my account.
Top

So I won’t post a similar pic of my personal Disney+ collection. I don’t want to scare you all. Randall can attest that he’s seen the terror...!

While I do have most of what’s I’d currently want to bother with on D+, many of the older features are non-HD discs, so there’s that, and the more stuff getting added is where I’m hoping the gems are. Plus you get the whole shebang for a year for much less than the cost of a one-off big disc box. I used to drop double the price of D+ on one Archive Edition LaserDisc set back in the day, so it’s a no-brainer bargain as far as I’m concerned.

I didn’t realise that Tinker Bell was so good it was worth having two copies of, though! Actually, I probably did...I have it on DVD and Blu-ray (along with the sequels, none of which I’ve ever watched!). And you know how I’m going to end up seeing them? When I’m flipping through Disney+!

TinkerBell actually got better with each entry in the series, IMHO .. the first one is definitely the weakest, at least in terms of story.

Granted, I have access to Disney+ for 'free' (for the first year, thanks to Verizon) .. but I agree it is an 'added value' to my own large Disney home video collection; not a 'replacement' for it.

I'm pleased to finally be able to watch many of the spin-off TV shows that I hadn't bothered to collect on disc, like Tangled: The Series and Big Hero 6 (both of which are surprisingly good, story- and art-wise) .. and shows that never got a proper home video release, like The Little Mermaid spin-off TV cartoon.
Top

I can attest with TinkerBell improving.

Rapunzel's Tangled Adventure is amazing. The season 2 finale was like, whoa! Did not see that coming! And the episodes that followed have done a good job of dealing with what transpired. I'm both sad and anxious to see how it will all end.

How about some old school Disney+ 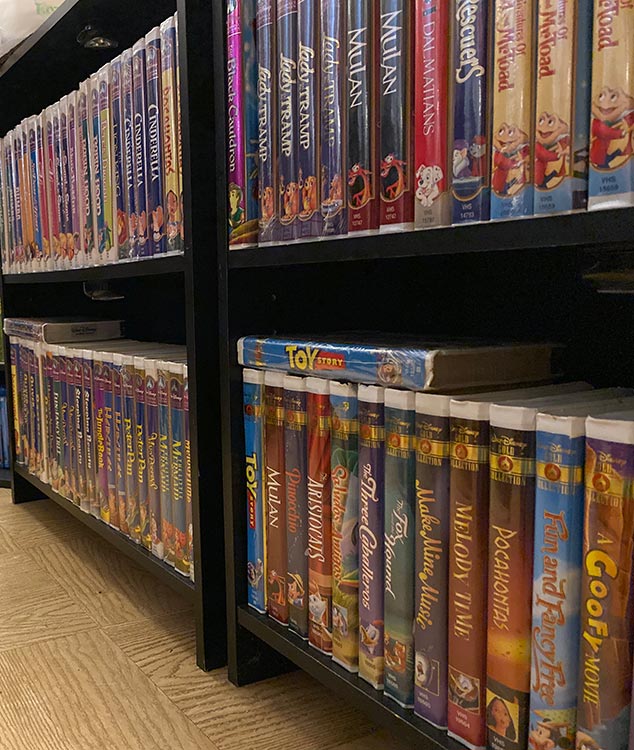 
I always regretted that I got rid of my old Disney VHS tapes so I started collecting them again awhile back. Unfortunately this is just a small part of the collection so far!
Top

Wow, Pocahontas gets to be on three shelves!

I got rid of all my Disney VHS tapes ages ago, and most of the theatrical feature DVDs (with strategic exceptions). I don't have enough space to keep everything! Plus, I've had success selling on eBay, which helps with the costs of upgrades.

Now Ben, on the other hand, keeps just about EVERYTHING! I am witness to that.

(I do still have a few tapes. Some Henson stuff, and the Spider-Man live action show, a few Hanna-Barbera ones...)
Top
Post Reply
815 posts