Was surprised there wasn't a general PPG thread any where, so figured I start a new one.

Any way, Warners in making a live-action adaptation of PPG for the CW, set to when the girls are now in their 20s and wonder if they lost out on a proper childhood by being crime fighters this whole time. The series will star Chloe Bennet (Agents of S.H.I.E.L.D.) as Blossom, Dove Cameron (Descendants) as Bubbles, and newcomer Yana Perrault as Buttercup.

Weird, I could've sworn we had a PPG thread. Or maybe I simply feel that way because I reviewed the reboot cartoon they did twice in the same year.

Nothing this live-action series does could possibly be worse than the Enchanted "parody" that show did, so it can only be an uphill battle from here for the franchise.

I can’t ever unsee that, can I?
Top

I loved the PPG What A Cartoon! shorts in the mid-1990s .. and I adored the original TV series ..

.. I also have a lot of respect for the 2006 japanese adaptation: Powerpuff Girls Z .. gotta admit; they took a concept that most might consider best-suited for a 5-minute YouTube video (the PPG as stereotypical anime 'magical girls') .. and actually committed to it, enough to make it work well on its own terms, as a 52-episode TV series.


But I tuned-out of the 2016 reboot cartoon series, soon after it began .. and Dacey's clip doesn't inspire me to revisit it.

I'm a huge fan of the original and didn't care for the reboot at all. The new voices didn't help either. Hated Buttercup the most...

On to the live-action series, I'm intrigued. Might be terrible, but there's definitely potential. I give them credit for cartoon accurate outfits, they could've gone for a super edgy look. The only real complaint is they look rather cheap. Knowing the CW, watch that be a dream sequence and they actually look worse...
Top

Indeed. Although maybe they won't look so bad without the filter.
Top


Comicbook wrote:Photos from the set of The Powerpuff Girls leaked online recently, showing the trio of stars wearing costumes that resemble the younger versions of the characters from the original animated series. Those photos have now been revealed to be from "flashback" scenes, dealing with the teenage years of the characters. They won't be wearing them for the majority of the show.

Called it, yay! So at least we'll still see them. Stoked about Tom Kenny.
Top

So the costumes the fans actually liked won't be what they wear for the majority of it?

I'm on board for this if it works, but it seems like there are also many, many ways it could go wrong.
"Yesterday is history, tomorrow is a mystery, but today is a gift--that is why it's called the present."
Top

A look at the house: 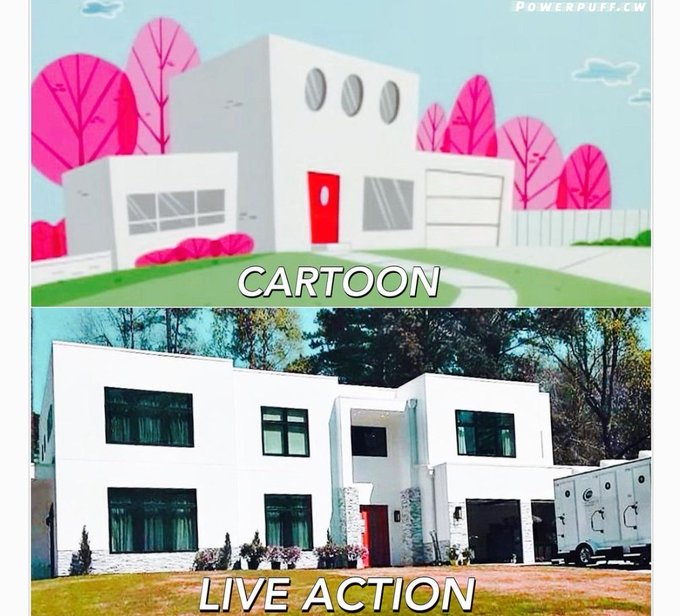 They better make those trees pink in post-production!