I just wanted to introduce you our student short film, from Georges Méliès school il France 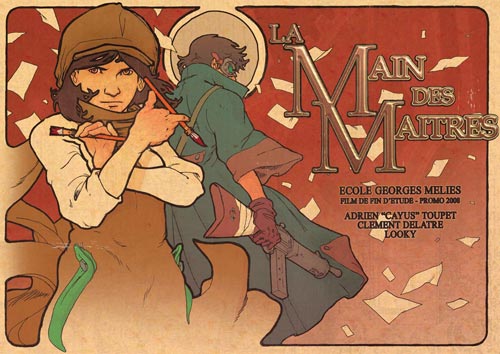 In the middle of a revolution, the story of two young workers trying to claim their existences. Co-directed with two friends of mine, as our graduated short film.

Thank you for watching!
Top

Thanks for posting the link to your graduation film, and good luck with its success!

Thank you for your welcome

Thanks for this!
Top

There's just a few days left in the Aniboom Competition and we really want to win so we need your help!...
Please sign up to Aniboom, vote for our video and add it to your favourites.
To show our appreciation we'll send you a never-before seen, personalized, xmas cartoon starring breeson!

Just send an email to cartoons@studionx.com with your aniboom name and your email address, and we will send you a personalized xmas episode of Apt323!

A Day In The Life:


1988, Apple was eager to show off the graphics power of its Macintosh II line of computers. Using a program called Super3D, a group of talented artists produced "Pencil Test," an animated short created entirely on the Macintosh. Keep in mind that QuickTime did not exist in 1988; the movie was output frame by frame to an imagesetter, and then recorded to film.

According to the credits, John Lasseter (who would have been at Pixar during this time) is listed as "Coach", while Andrew Stanton (who was not at Pixar yet IIRC) is listed as "Storyteller" and "Illustrator".

While it is obviously technologically crude by today's standards, the character still comes through, and it's all pantomimed as the best Pixar shorts are. You can see even from this early attempt where they're going with things...but slightly odd that Apple wouldn't have used Pixar itself to show off their power...what Pixar was doing at this time outweighed the results here and maybe Apple would have made more impact as revealing itself behind something more like what Pixar could do even then?

Ah, but you forget the soap opera involved here! Apple founder Steve Jobs had been forced out of the company he created in the mid 1980's. He then bought the group than would become Pixar. I doubt the management at Apple even bothered to ask for Pixar's help knowing they would have to go through Steve Jobs.

And, again IIRC, weren't Apple and Pixar technically competitors at that point? Wasn't Jobs allowing them to make the shorts in order to sell the "Pixar Computers"?
Top

The point of this film was to show off the POWER of a Macintosh II computer.

I remember back in 1988 at an animation festival in Pasadena, watching this film. The HUGE gasps and applause that erupted when that "Rendered entirely on Macintosh computers" came up.
Top

We're accepting animated short films in our Animation contest until January 29th. Check out the competition at http://www.superu.ca/contests/view/45
Top

I have one which is sure to be a hit. It is called "Humorous Phases of Funny Faces" and dear me I seem to have run out of chalk.


Thanks again, to JamesHudnall.com for the link!

Best spoof video that's come out of FunnyOrDie in a LOOOONGG while!


And all the naughty parts got bleeped!
Top

I noticed that most of the songs are taken,this movie is all about sex in an exaggerated and it's pretty clear,also I noticed that all the marketing makes this movies looks like it's about a cute,happy,dancing little pinguine and it's a happy movie which isn't what this movie really is,they don't mention how he got banished or what happens once he gets to Miami.
[img]http://i43.tinypic.com/bfqbtk.jpg[/img]
Top

New animated shorts about Cats, or the Perils of Feline Ownership