According to this article "Bolt" will be released in theaters in Digital 3D...

Also, it says that maybe there will be a trailer for it attached to National Treasure: Book of Secrets next month.

Yeah, espicially with the treatment Meet The Robinsons got. Too bad none of the theatres near me will have this, though.

Thanks Josh, my mistake.

Interesting that Sanders isn't going solo on a self-originated project. Perhaps if Crood does good, they'll let him loose on something of his own design.
Top

I hope they do too!

Um, sorry Sanders feels that way, but most animation fans see the Pixar group-system as one of the better innovations at the new regime (and quick to point how it saved "Meet the Robinsons" from certain disaster), and that it was "twisted geniuses" under Stainton that gave us so many half-baked and/or cancelled projects in the first place.


Twisted geniuses getting creative control under Stainton? No offense, but this just doesn't jibe.

Sanders getting more free reign on Lilo was a total anomaly--and thank goodness Sanders did, since many animation fans DO like that film.

He happened to be a favorite of Schumacker (who was running WDFA at the time) so yes, he got more creative control. But he was a pretty rare exception.

Stephen Anderson, Ron 'n John, Kirk and Gary and Mark Dindal did not have anywhere near the full opportunity to "strut their stuff" as directors since the Disney regime (execs) at the time constantly made notes and told them to change things.....(which apparently isn't all that different from what's going on now.) And all those "cancelled projects" sounded very cool to me....they were never even made, so how could we possibly know they were "half-baked"?

Now, of course we do have to take into consideration the fact that it's Pixar who's running WDFA now, not Stainton and Schumacker, so, it's pretty safe to wager that they've got good advice and ideas for the older guys. (at least better than the Eisner regime did)

It just feels that there's a huge divide between how Pixar artists are treated and how Disney artists are. I don't know if this is true or not--just a feeling I get. In an interview, let's say, someone like Brad Bird, Andrew Stanton, Pete Doctor are described in reverential terms by Lassetter. When you hear him talking about someone like Stephen Anderson or Chris Sanders, it doesn't feel like he's talking about accomplished directors for Disney but.....first time animation students who need to be reigned in. Would he treat Pixar directors like that? I'm not alleging anything, just trying to put across why some animation fans are (a bit) skeptical of Pixar's actions.


All I can really do is speak on the things I know first hand. I happen to know Chris and am currently working with him on his new film.

You are? Wow, that's just awesome!

So I guess that means you work at DW then? You sound very knowledgeable, I really hope you post more here!

What about Chris!? He likes message boards, right CTind?

sigh, it would be so awesome if he became a member...

You know, if we do get a teaser trailer of Bolt with Book of Secrets, that would mean Wikipedia is right. Gasp!
Top

sigh, it would be so awesome if he became a member...

I listened to a podcast interview with him and he sounded so, so cool. I'd love it if he could direct his own movie at DW.

Exclusive!!
The first pic was just released on RopeOfSilicon.com which has published the 2008's calendar of upcoming Walt Disney movies.
A synopsis and a logo are attached too.
So here's the final look of Bolt, also with Rhino and Mittens. 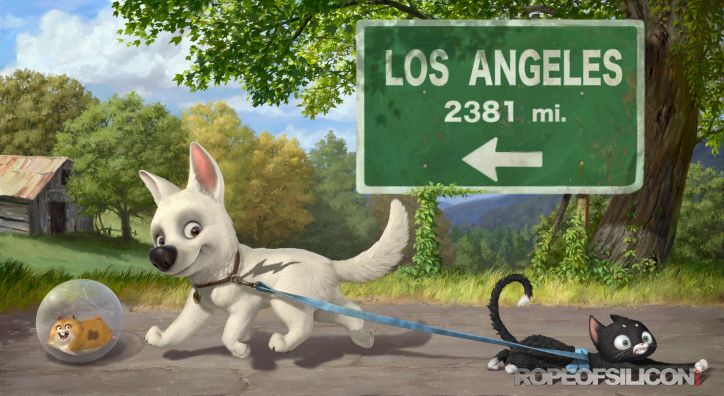 There certainly is a considerable difference between that and this:

Wow, that is so not what I was expecting. It's absolutely adorable!
"The difference between insanity and genius, is measured only by success"
Top

Any similarity between Sanders' American Dog and Disney's Bolt is strictly unintentional.

This is a distinctly different dog altogether...

It's a lot more cutesy than I was expecting. I didn't think Bolt would be a puppy either.
"The difference between insanity and genius, is measured only by success"
Top

Still, that's not exactly how I pictured Bolt, he looks so plain. If anything, I like the designs for the other two characters better.
Top

I"m kinda disappointed,this is nothing like the concept arts

(the concept arts were much better in my opinion) it's cute but i didn't saw that coming,this is look like something that DreamWorks or BlueSky will do,not Disney (espically Bolt's desighn).
[img]http://i43.tinypic.com/bfqbtk.jpg[/img]
Top

Keep in mind, that most of the concept art we saw for the film before, was when it was originally titled American Dog and still had Chris Sanders at the helm. IIRC, they featured techniques such as non-photorealistic rendering, which gave it that special visual appearence.

The look for Bolt so far is cute, but I agree, I am a bit dissapointed.
Top

hmm... I'm slightly confused-I think I expected something less ordinary... New design looks quite generic to me. Maybe it is cute but there is nothing special or memorable about it. I prefered that unmistakenly sandersish look of the dog (same for cat) - it has uniqe style and a lot of personality.
Top
Post Reply
730 posts