I wasn't aware that m/any of those creators were atheists. Especially Matt Groening.
Top

Randall wrote:I guess I won't be moving to "The Middle of Nowhere" then.

Just because you make fun of religion doesn't automatically mean you're an athiest.
"Yesterday is history, tomorrow is a mystery, but today is a gift--that is why it's called the present."
Top

True, picking on religion alone does not constitute the standard litany of Athie humor--
Generally, the minimum requires:
A) Associating ALL religion with either Loopy Christian Right or Catholicism, depending on your upbringing,
B) A preoccupation with either medieval inquisitions or pedophile priests as metaphoric "proof". (Mark Twain, for example, lived before the recent Catholic scandals, and tended to prefer medieval-inquisition jokes.)
C) A belief that "Jesus on a skateboard" jokes are intrinsically hilarious, iconoclastic and creative, no matter how many times they're told,
D) The mindset that you are somehow "punishing" or "educating" society for its greater benefit with the brave public service of your all-inclusive shock humor and the search for new frontiers, due to
E) A general free-floating fear that the rest of public or society in general will turn into panicky sheep-like mobs at the slightest provocation,
F) Stemming from a socially-conscious fear of headlines about all those crazy car-bombing Iranians and book-burning Southern Baptists that you see on the news every night...THEY'RE the crazy ones, you know!

And yes, just making Jewish jokes (without the whining of later Woody Allen) alone does not qualify Mel Brooks as one--
We did get wacky-Jesus jokes and old Inquisition grudges in History of the World Pt. 1, but those were more in the innocent pursuit of old-fashioned borscht-belt gags.
(Which is pretty much the dividing line; as C.S. Lewis put it, did anyone ever see a cheerful Athie?)
Top

I'm not sure whether or not Kevin Smith is an atheist (I know he was brought up Catholic) but I thought Dogma was much more of an affirmation of faith and G-d than many of its critics realized.
Particularly the end, when Bethany realizes who she really is. Even with all the jokes there was a basic respect for people's beliefs and the idea of G-d, as well as religion in general.
You can’t just have your characters announce how they feel! That makes me feel angry!
Top

What's this not being able to say "God" or "Atheist", people? They're just words.

But...I am concerned that this discussion is in danger of wandering way off into the kinds of territories that we stay away from here at AV, so...back on topic - if it even warranted discussion - please...
Top

I think if any animated series from the last twenty years has managed to capture the feel of the Looney Tunes, it's Animaniacs. Seemingly family-friendly cartoon series actually filled with plenty of adult jokes scattered through as well as celebrity cameos and classic cartoon violence. Even Richard Stone's music has a Stalling vibe to it.
Top

Ben wrote:What's this not being able to say "God" or "Atheist", people? They're just words.

(Uh, believe the Jewish religion forbids using using the unedited G-word in destructible mediums such as mere print?
And you can say "Atheist", but that indulges the self-delusions of a group of people's snarky vanity-complexes with more social credibility than they deserve...A colloquialism is shorter, more informal and dismissive than simply calling them "a bunch of Penn Jillettes", and you can't really shorten that one into a nickname, as "Pennies" doesn't quite cut it.


I think if any animated series from the last twenty years has managed to capture the feel of the Looney Tunes, it's Animaniacs. Seemingly family-friendly cartoon series actually filled with plenty of adult jokes scattered through as well as celebrity cameos and classic cartoon violence. Even Richard Stone's music has a Stalling vibe to it.

It crosses over into the "Bugs Bunny movie" thread that what Looney Tunes had back then was a national sense of humor whose tastes and timing rhythms still rooted in vaudeville and burlesque, crossing over into 40's-movie and old radio....A pie in the face was still funny, and if Bugs didn't throw one, the Stooges would.
(Later on, some of the last Robert McKimson shorts tried to keep up with 50's whitebread-sitcom, and the studio ended on trying to experiment with the 60's counter-culture tastes....There was only one era for Looney humor.)

Nowadays, everyone's trying to imitate the style, and seem to think that Tex Avery directed every single LT short on crack. (Except for the Spielberg toons, who think it's like LA-produced 80's sitcoms, only faster!) Which comes from imitating something you don't understand.
Top

Yeah, the 1990s WB shows were influenced and imitations of the old LTs, not new versions of them.
Top

I love it. It's obviously programmed as a Best of, with all the best-known shorts included. If you name your 20 favorite Looney Tunes shorts, chances are that most are on this set (there will be 50 total). To me,there was no need (as some will argue) to replicate the Golden Collections we already have. If I'm going to buy a BD set, I just need my absolute favorites, and this set delivers. Great line-up! Nice packaging, too.

Darn, there are lots of great Blu-ray sets coming out this year.
Top

Seems about the right way to go with this, given the Tom & Jerry announcement recently. WB know that the most avid fans already have the Goldens, and that what we really want are the best of the cartoons in HD, and that's what this gives us.

I'm not as jazzed up about the Digibook packaging as Rand (I like Digibooks, just was expecting something "more" for this), so it will be the Limited Edition for me, if only so the set looks more significant on the old shelf. Even then, I don't think it's really going to be that thick, as the other trinkets don't make up that amount of space, though there is that glass in there.

They gave away a litho in a previous title and again instead of making it a decent size it looks about half the size of a BD case, so not that big. However, the tin sign that could be a magnet sounds good, and the selection of cartoons is excellent, with - finally - great cover art. Knowing how quick WB's limited editions can go, I've just pre-ordered, just to be sure...!


Now, the other questions is...have you heard about this: 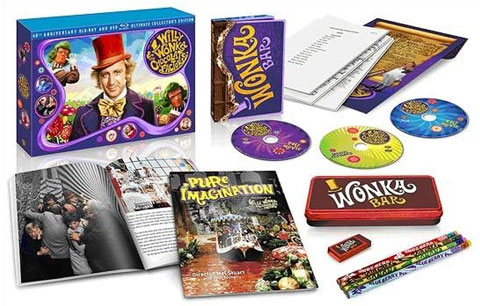 I was actually referring to the "swag" edition of LT when I commented on the packaging, though I do like Digibooks. However, while the collector in me is most intrigued by the limited edition... I just don't know if it's worth it. Only $20 more on the SRP, but not really anything there that I'd really want. I'd want a cool exclusive figure in there, like one of the Dover Boys or something.

Speaking of Digibooks, I bought the Wonka Digibook a few months ago. I like the movie, but it's not a huge favorite (maybe partially because I never saw it as a child), so I'm fine to pass on the big new set. Looks fabulous for fans though.
Top

I'd likely go for the Digi anyway, but $20 is worth it, I think, for the better presentation, and there is that pretty decent drinking glass in there that's fairly unique - though not something that screams out Looney Tunes!

Wonka's a biggie for me, though I held off on the Digibook for ages and only finally caved in in the past few months. I'm hating the double-dip, and there isn't a great deal new to entice me (I think they're spreading things thin with this one), but I did see it as a child and so it's a must have!