Got both the Anna/Elsa model and the ornament today. Wow. Saving my points this long sure paid off!

Dacey wrote:Got both the Anna/Elsa model and the ornament today. Wow. Saving my points this long sure paid off!

Also helped that I realized I hadn't redeemed the points from the Studio Ghibli films yet.

If you got a PS3 and 3750 points, the Disney Infinity 1.0 Starter Pack is available.
Top

Lord Akiyama wrote:If you got a PS3 and 3750 points, the Disney Infinity 1.0 Starter Pack is available.

(I'm not into "Build your own" games, which is why Minecraft holds no curiosity for me.)
Top

A whole bunch of blu rays have been added to the Rewards list.

Ack! I just bought Arachnophobia because they only had the DVD on there for the longest time!

Nothing for me there that I haven't got already...

And still no Wings Of Life...the only catalog Disneynature title they haven't offered through DMR yet.

I recommend the New Groove, Brother Bear, Hunchback and Rescuers packs, though, above the others if people are choosing which to go for.

I was really excited about this because almost every BD I have left to buy is on that list! It wasn't until I was checking out that I noticed a lot of those are the BD/DVD packs but in the DVD packaging. Oh well. I got a couple at least!

Also need to decide if it's worth pulling the trigger on Mars Needs Moms. I don't usually buy films I haven't seen, the reviews are terrible, and I don't care for mo-cap like this. However, I'm a huge Berkeley Breathed fan and, apparently unlike a lot of people, I actually like 3D discs! Plus I wouldn't have to spend any money.
Top

James wrote:Also need to decide if it's worth pulling the trigger on Mars Needs Moms. I don't usually buy films I haven't seen, the reviews are terrible, and I don't care for mo-cap like this. However, I'm a huge Berkeley Breathed fan and, apparently unlike a lot of people, I actually like 3D discs! Plus I wouldn't have to spend any money.

I love 3D disks, too, but I also love kids' picture books--
If you're thinking that a big-studio CGI movie of any Barnes & Noble picture book, let alone a Breathed one, will bear even the faintest resemblance to the original, let's spend a night at the museum and take a snowy train ride, shall we? That Opus Christmas special was more Breathed than this one.

(And this movie had already failed when Christmas Carol opened--When Mars opened, it was an established fact five months ahead that Zemeckis Was A Looney.)
I watched the 2D version for free on Netflix also to audition the 3D disk, and gave up after fifteen minutes. And if you go ahead and have the same reaction, I'll put money down that we'll both share the same reason why.
Top

I think Arachno is the only one of those I don't have, and might pick up. But it's not a must-have if I see something I want more.

I kind of... ahem... liked Mars Needs Moms when I finally got up the courage to watch it (and the 3D was fun, too). Maybe the lowered expectations helped, but I thought it was a nice little movie, though I would have preferred non- mocap of course.
Top

Yeah, even though I have what I need from the new arrivals I doubt I would have gone for many of those because of the DVD sized packs, since they wouldn't fit in my new shelving sizes!

But, James...I honestly don't think you'd like MNM and would rue the day you wasted your points on it, and I say that as something of a Breathed fan (you're the only other person I know that has a copy of A Wish For Wings That Work!).

Wait and see if you can catch it on TV (it played here over Christmas so it must be on the US schedules somewhere) and see if you last through it before you use valuable points on it. Don't listen to Rand on this one...he liked Beowulf, remember?

I'll probably end up just buying it used one day, simply because it's Breathed. Though I know he barely had any input after they bought the rights, you of all people know how collectors can be!

Here's a quick look at what I was able to find after just a few minutes. There are a few more books in boxes out in the garage but this is the majority of my Breathed stuff. Almost all of this was bought back in the late 80's/early 90's. I used to carry around the big collections like a bible during college! 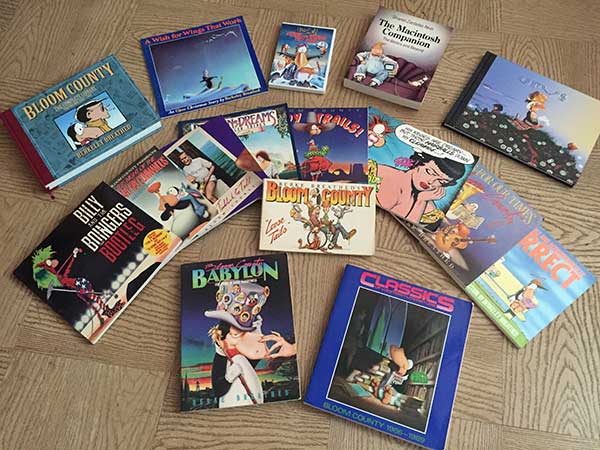 Wow! You have laminate flooring!

Ha, you would notice that after spending the last few years in construction!

Someone who owned this house before us turned a part of the basement into an extra bedroom and cheaped out on the flooring. It's my computer/exercise/game room now. It's actually kind of nice though as I don't have to worry about being careful with it. Spills, scratches, dents, who cares!

BTW, when do we get some pictures of the finished product you've been building?
Top

Nothing cheap about laminate! Well, you can get different grades, naturally, but that's what we went for on our ground floor (carpet everywhere else). We went for good stuff but decided on laminate since it was still cheaper than wood and there was a toss up between carpet or solid flooring and the result was a compromise of solid flooring but with loads of rugs. At which point it seemed nuts to spend so much on wood (at approx 85 square metres worth!) and then largely cover it over, so laminate did the trick.

And like you say it's good for marks (we have friends with wood and they wish they hadn't!) and the like...quite impressive stuff. It doesn't have the "clunk" of wood when you walk on it, but as I say we've gone for lots of rugs anyway.

Pictures...I'll have to email you some, since I don't want to post photos of my place online, but I may share the all-important collection images here when it's all in place. Maybe I should start a home theatre thread at that time, and post a little document of it in progress...

A collections/home theatre thread is a nice idea. It'd be fun to post shots.

Re: Breathed--- I am a big comic strips buff, though I mostly collect classic strips. I've been very tempted on the Bloom Count collections that IDW/LOAC has done (they're beautiful books, well annotated), and may splurge someday. I have about a dozen or so other LOAC collections, and love 'em.