A sequel is in development. No real surprise there. What might be is this:


Our sources say that the plot will follow closely to The Return of Jafar though, the straight-to-video follow-up to the animated flick released in 1994.

No, no, no. If there's one positive thing about shot-for-shots possibly getting sequels is it pretty much forces them to be more original! The article mentions one "hiccup", (which is a spoiler) I can think one other: Iago's redemption arc. That was like the best part. He was barely a character in the remake, so they can't really replicate that. Unless they choose another character .. even still, no.

Wouldn't be against it completely. I actually love The Return of Jafar, despite a few issues. And the songs were pretty memorable like "Forget About Love" and "You're Only Second Rate". There's a lot of good despite it being a fancied up TV pilot.
Top

Daniel wrote: ↑
July 17th, 2019, 8:12 pm
Wouldn't be against it completely. I actually love The Return of Jafar, despite a few issues. And the songs were pretty memorable like "Forget About Love" and "You're Only Second Rate". There's a lot of good despite it being a fancied up TV pilot.

The original WAS a TV pilot, and "Aladdin & the King of Thieves" was a TV finale.
Only those who work at Disney, and buy every piece of corporate PR wholesale, would believe RoJ was a "movie" just because the video department said it was.
(But then, I keep seeing people who believe that "Cinderella II" was a "movie" and not a TV pilot, so, hey, anything's possible.)

And maybe they could pay tribute to RoJ replacing Robin Williams with Dan Castellaneta, by replacing Will Smith with Chris Tucker!

If they’re going to do a sequel, they really should lean more into the 40 Thieves concept and go more Arabian Nights inspired than start to make pale retreads of pale DTVs!
Top

Yes, as I said; "fancied up", meaning "dressed up", "tricked out"... though far from the first time something from TV was dressed up as something more, it was the first of its kind to be put out with all the fanfare that would ordinarily go to a feature. With that in mind, it's not surprising people think Return of Jafar and Dreams Come True are real "movies", it certainly not without merit. Considering some of the things you believe, you're a fine one to talk.
Top

Aladdin will be released on Blu-ray and 4K Ultra HD on September 10th. On the very same day the animated classic will also be re-released and will be next in the Walt Disney Signature Collection.

Definitely won't be getting the live action, but maybe give it a rental. Already have the DVD of the original so barring anything noteworthy, I'll likely pass on that too.
Top

Should point out that Aladdin '92 is also coming to 4K.

Since the next day is my birthday and Aladdin is perhaps my favorite of the 90s films, it will be mine, with a curious, apprehensive approach to the new one...
Top

It's a huge favorite of mine, too.

Here's the press release for the cartoon:


In 4K for the First Time, The Animated Classic “Aladdin” Joins the Walt Disney Signature Collection on Digital, 4K Ultra HD™ and Movies Anywhere Aug. 27 and on 4K Ultra HD™ and Blu-ray™ Sept. 10

The Signature Collection Edition invites every member of the family to join Genie, Aladdin and Jasmine to belt out the unforgettable songs from “Aladdin” — such as “A Whole New World,” “Friend Like Me” and “Prince Ali” — through a new sing-along version. Other fresh features include a walk down memory lane with Scott Weinger (speaking voice of Aladdin) as he reflects on his personal journey portraying the diamond in the rough and meeting with the original cast and filmmakers, and one jump into the recording booth during the original recording sessions. Digital exclusive features legendary animator Eric Goldberg reminiscing about drawing Genie. Also included are hours of classic bonus gems, from hilarious outtakes with the legendary Robin Williams (voice of Genie) to an in-depth discussion with directors John Musker and Ron Clements.

Disney’s tale of the lovable “street rat,” Aladdin, self determined Princess Jasmine and the all-powerful Genie has remained a family favorite for over a quarter of a century. It all began with the animated classic “Aladdin,” the highest-grossing film of 1992 and a two-time Academy Award®–winner, and continued with the hit Broadway musical “Aladdin” and 2019’s live-action film adaptation “Aladdin,” directed by Guy Ritchie and starring Will Smith as Genie, Mena Massoud as Aladdin and Naomi Scott as Jasmine.

Families can decide how, when and where they wish to enjoy “Aladdin” in their households. The film arrives two weeks early on Digital 4K Ultra HD and HD with an exclusive extra — and a Digital bundle doubles the fun with both the Walt Disney Signature Collection Edition and this year’s thrilling, live-action adventure “Aladdin.” A physical copy of the film will be released as a 4K Ultra HD™ (4K Ultra HD™, Blu-ray™, and Digital Code) and a Multi-Screen Edition (Blu-ray™ and Digital Code).

“Aladdin” is the 10th title to join the Walt Disney Signature Collection, which includes groundbreaking films created or inspired by the imagination and legacy of Walt Disney, featuring timeless stories and characters that have touched generations. The film takes its place alongside “Snow White and the Seven Dwarfs,” “Beauty and the Beast,” “Pinocchio,” “Bambi,” “The Lion King,” “Lady and the Tramp,” “Peter Pan,” “The Little Mermaid” and “Cinderella.”

NEW BONUS
Sing Along With The Movie – Sing along to your favorite tunes as you watch the film. With magical on-screen lyrics.
Aladdin on Aladdin – Join the speaking voice of Aladdin, Scott Weinger (“Fuller House”), as he reflects on almost 30 years of being Aladdin.
“Let’s Not Be Too Hasty”: The Voices of “Aladdin” – Take your seat in the recording booth and watch as the voice actors of “Aladdin” work their microphone magic.
Alternate Endings – Enter the realm of “what if” and see just how differently the movie could have ended.
DIGITAL EXCLUSIVE
Drawing Genie – Join prolific animator Eric Goldberg as he draws and reminices about the Genie.
CLASSIC BONUS – Revisit over 40 exciting bonus features from previous releases including:
The Genie Outtakes
“Aladdin”: Creating Broadway Magic
Unboxing “Aladdin”
*Bonus features may vary by retailer


Few tidbits of interest; the return of the original aspect ratio (1.66:1) - nice. And the alternate endings. Love me "what ifs"! Aside from that, the new bonuses seem pretty meager.
Top

So Guy Ritchie's Aladdin has quietly passed the $1 billion world-wide mark, making it presently the third of the Disney re-imaginings to do so as well as the second highest grossing live-action musical (after Beauty and the Beast).
Top

Despite my lukewarm feelings of the film, that's pretty amazing! Mena Massoud sent out this Tweet for the occasion:


We’re officially the most ethnically diverse cast to ever lead a film to the billion dollar club. Pretty. Freakin. Cool.

everyone who went on this magic carpet ride with us.

Dan wrote: ↑
July 28th, 2019, 12:09 pm
So Guy Ritchie's Aladdin has quietly passed the $1 billion world-wide mark, making it presently the third of the Disney re-imaginings to do so as well as the second highest grossing live-action musical (after Beauty and the Beast).

And people keep asking why Disney does these remakes.

Me, I'm still going with the previously postulated "90's Big-Four completism" theory ("Mulan" is only being made for China, with the US as an afterthought), and the more Occam's-razor "Disney doesn't have a marketable Name-Franchise of their own" explanation.
Top

Trailer for the Signature Edition:

And a look at the Target exclusive: 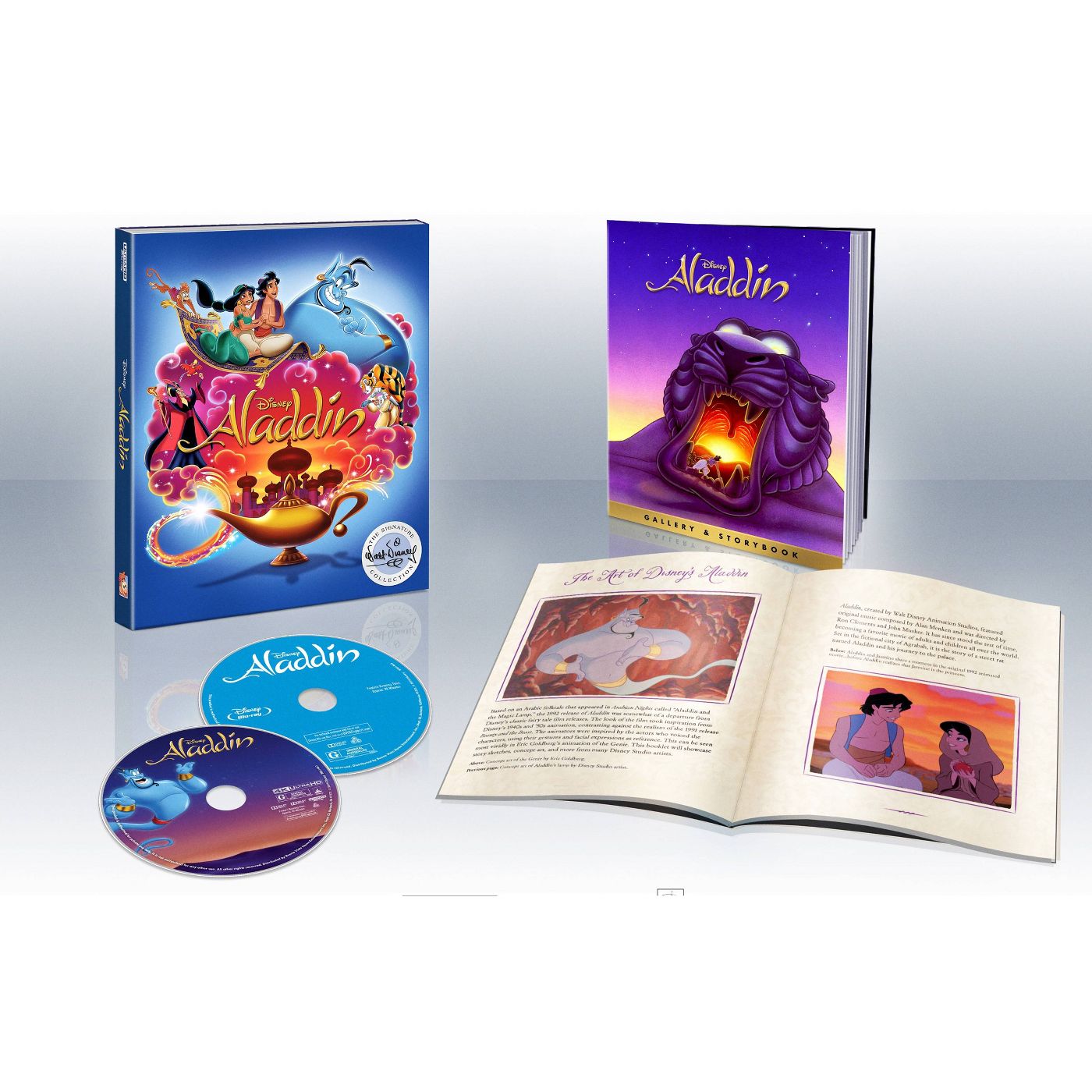 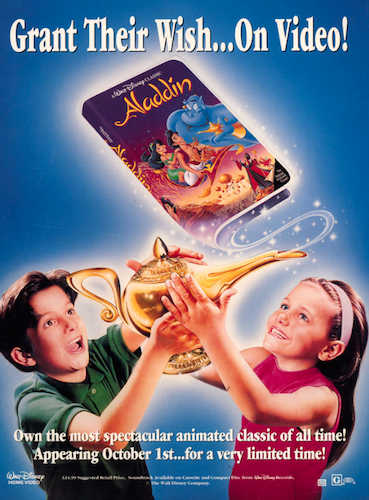 Yep, that takes me back.

After all these years, Jafar and Iago art still in that same pose.