ShyViolet wrote: ↑
August 19th, 2019, 8:25 pm
And where exactly did THAT plan go??? Relegated to brand-spanking-new Disney’s dustbin of abandoned ideas.

I know it’s because Princess wasn’t the blockbuster they’d hoped for but seriously??? It still did well and there was NO reason to just leave 2d out to dry like that (I know, Pooh was released theatrically but IIRC it wasn’t to very much fanfare, although I might not be remembering correctly, so bear with me, um, no pun intended. I THINK it turned out some kind of profit, but it obviously wasn’t enough.)

It wasn't Pooh, it was the media analysts still trying to continue '03's "2D is Dead" script by saying that, well,"since everything will be in flux after Eisner's departure, it'll be a mess, the new guys won't know what to do, and their failed attempt to rally Classic 2D animation can never stand up to the Holy Might of Shrek!--Is Disney's death-blow permanent?" (Meaning DreamWorks/CGI in general, we'd had the third movie.)

And to add insult to injury, it wasn't enough that P&tF's messy, improvised story, repetitive in-your-face messaging and lack of likable characters was following that script, but when Tangled, "the good one", came out in CGI, did the story, music and characters take the credit in the industry press for its runaway success? Nope--Guess what did.
(Although at the time, some stories reported that first-night audiences went away thinking Tangled had been in 2D animation, and when they were reminded it was CGI, they recalled it being in 2D because, quote, it "should have been!" or "felt like it!")

Also interesting to look back at the necro'ed 2010 thread...We had so many posters back then.

You were gone for like a week and the forum was dead! You certainly keep this place afloat

The film is getting the 4K treatment: (November 5th, along with a couple of other titles) 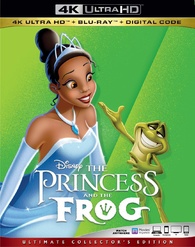 Now that is just bad. You would think being 4K and all they would go the extra mile... this is incredibly amateurish. Certainly rivals those recent ugly covers from DreamWorks.
Top

Ugh, you’re right Dan! That’s atrocious! It’s so lacking in epic scope/drama/romance that it actually resembles those unholy DTV rip-off movies. Just Tiana and Naveen as a frog in a “cute” pose with no hint of the movie’s resonance? (Or New Orleans setting for that matter.)

Plus what’s with the Bug’s Life leaf background?? Totally wrong in tone for Princess...

Yeah...I don’t like that "artwork TBA" banner on there either.

Honestly guys, the lack of thought is clear, but this is a last grab before everything goes to D+ forever more. The really weird thing is the cutting off of her arm...!
Top

Recap of the 10th Anniversary event.

Anika Noni Rose performing "Down in New Orleans" from the event:

She has not lost it!
Top

I know it means things like that can be shared, but it still amuses me that people end up missing the enjoyment of a real, live, right in front of you moment because they are so busy watching it through their phones, pads and tablets.
Top

Yeah, even trying to simply watch it and take it all in, you will no doubt be distracted with all those screens popping up.
Top


There currently isn’t a live-action version of “The Princess and the Frog” in the works and she used the opportunity at the panel to encourage fans to ask the studio for a sequel.

“For ‘The Princess and the Frog,’ what I’m most interested in, because it’s also what the fans are most interested in, is a part two,” said Rose to a lot of applause. “I get a lot of emails, I get tweets, I get all kinds of messages – ‘We want a part two. We want to see where this family went? How did the restaurant turn out? What happened?’” said Rose, prompting a lot of people to audibly say, ‘Yeah,’ in response in the crowd. “That would be really exciting for me,” she added.

Rose said in the decade since the film's release in 2009, she often gets inquiries about another film in mail and on Twitter. She wants fans to know she's not the right person who people should be reaching out to about a sequel.

I would love a sequel. Unlike say, Moana, which is rumored, there's so much more to tell. Other questions that come to mind, did Lottie find a beau? How is Louis adjusting to life beyond the bayou? And for that matter, Naveen? Since Tiana was able to talk with animals in froggy form, did it by chance stay with her? And probably the most important question of all .. did Tiana's mom finally get those grandchildren?

Daniel wrote: ↑
October 28th, 2019, 1:28 pm
"I am not in charge. I'd like to be, but I am not," Rose said to a lot of laughter. "So what I tell you, when you want to see a 'Part 2' of 'Princess and the Frog,' send your 'at' to Disney, to Disney Animation, send them a physical letter, make your petitions, because they don't know what you want unless you tell them. I know what you want, but I am not in charge."

And what she'll find out is that, thanks to Bob Iger's "The Princess Stays in the Picture" intervention to keep Tiana in the Princess marketing and theme-park exposure, just to thumb his nose to the 2D-is-Deaders

, there's a generation that now loves Tiana but...still doesn't quite warm to the movie. It's still a mess.
Top

Pretty fascinating to see how little was changed. Love that song.
Top

Tons of. Eww during this event. Watching now and still Pixar and Marvel to go. We’ll have a lot to report when this is done.
Top