Disney's Raya And The Last Dragon

Raya is pretty determined but no mary sue.

Oh, good. The Mary Sue in "Rogue One" had me worried.
Top

Do you mind? She was a Mary Susan!

Daniel wrote: ↑
February 27th, 2021, 2:34 pm
shopDisney has a digital adventure activity. If you complete the quest -- learning about the characters and answering three questions -- you can unlock wallpapers and receive a free draw string bag! US addresses only, sadly. Hope it's cute!

Got it earlier this week. It's beautiful! I was expecting it to be smaller, have just the logo and be made of that eco material. It's really nice in person. Based on that poster a couple of us liked. Showing the silhouette of Sisu, Raya with the orb, the rainy forest backdrop. Stunner! Here's some pics I took to give an idea: 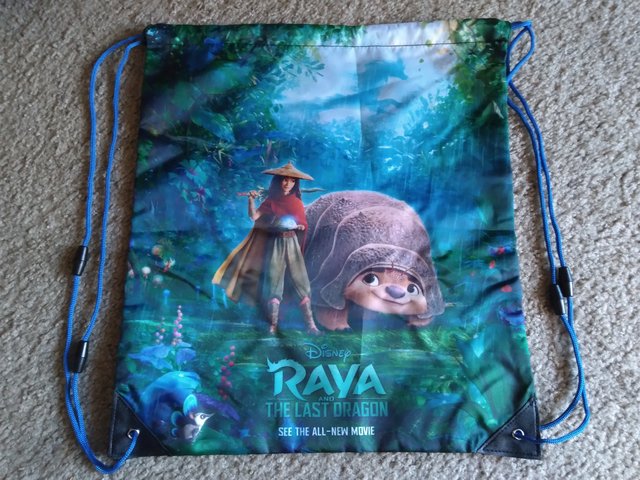 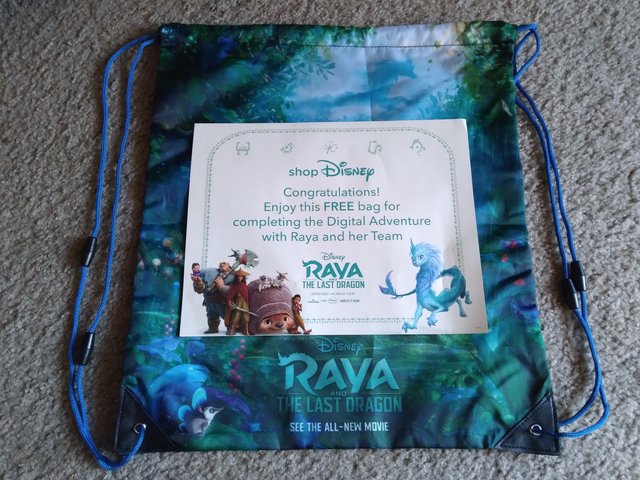 Included the paper it came with for good measure. For free, I'm beyond happy!

What a bonkers but almost brilliant movie!

I think this is the first time Disney has applied such modern moviemaking techniques — the (slightly) techno scoring, split-screen editing, the random, flippant humor — to a classically set, "traditional" story, and the result is far from a jarring effect and actually really works well, bringing a complete freshness to what looked like, and could so easily have been, a Moana clone.

Indeed, plot and tone wise, it did play like a mix of Pocahontas, Mulan, Frozen and Moana, as well as some Star Wars old and new, but takes the best parts of those to come up with something that feels fresh, even if it isn’t really, since the story is kind of the same old thing that we've seen before many times over. But that’s where the modern approach makes it work and feel new enough.

And what timing the movie's release has! Who at Disney knew four years ago that we would be in the midst of a global pandemic, with nations all over the globe split down the middle politically and socially!? Raya And The Last Dragon speaks to all that as if the film was basically created in the last six months! (Apparently, a lot of it was, at least in final animation and voice recording, which does its best to hide the "microphone in a cupboard" sound quality that occasionally slips through.)

It’s incredible to easily read into it the obvious virus-like Druun, "spreading so fast" and sucking the life out of those it touches, and the vaccination-like force of the dragons, while the five parts of Raya's homeland ending to the learn the lesson of unification all makes the film a weirdly prescient (in its making) and timely (in its release) movie that hits many points home.

Now...it’s not all perfect. The animation is very odd, not because it isn’t very good, because it largely is, especially in the designs. But the characters often have the uncanny valley about them — which is *really* weird to say about a CG cartoon to begin with! — and as good as *some* of the character animation is, there are also *real* clunkers n there that aren’t much better than DTV or TV fare. The Clone Wars came to mind a few times in looking at Raya's father especially, and just what was going on with young Raya's over-animating in the opening moments!?

It's all very strange. And as much as the coloring and designs are mostly beautiful to look at, the texturing can also often let them down by being overly "simplistic" and lower-budgety: my previous comment about this looking like a step back to around the time of Meet The Robinsons (also a Don Hall film, interestingly) and Bolt still stand. But then there are moments where everything looks amazing: the villages Raya's gang visit (complete with multitudes of people, no skimping here!) and the many flashback/backstory/world-building sequences, full of gorgeous, tradigital-looking shots, designs and moments.

A lack of songs wasn’t really missed, since the plentiful action takes their place, and I also liked how character fates were played out, both in being pretty plain up front about who people were and not dragging out the predicable "surprise" twists. Although I didn’t see that end coming and loved the choice, actually thinking in hindsight it could have been played out even a little longer while a certain decision had to be made...

In looking back on James' front page review, it looks like we saw completely different films. Yeah, the modern dialogue did seem out of place at first, but we’ve been slowly weaned onto this by the likes of Rapunzel and Frozen, and I just found it fresh and, dare I say, invigorating. And the one word that kept coming back to me really was "epic"!

But, in all, I really, really, really liked this movie! Can’t wait to add it to the shelf around Junetime, and hopefully make it our family's Christmas treat movie at the end of the year...if the Druun doesn’t come back again...!

Since I'm still in Disney-movie lockdown, my only exposure has been through playing the Disney Magic Kingdom app game, making it the second (third, if you count The Mandalorian) time I've had to figure out character shticks without having seen the movie in theaters on opening day.

And, yes, I'm already getting quite a few Mulan "I've got a sword! We've...ALL got swords!" vibes from Sisu's comic-relief definitely-human-not-a-dragon-nope act...
Top

Note the above HT video is FULL of spoilers!!

And...it’s not so much the usual HT treatment as just a plot-picking exercise, and a pretty unfunny one at that.

Whatever they say about the elements, Raya just *works* as a slice of entertainment. I’ve been thinking about this more and more today, and the more and more I like it.
Top

As I, ahem, may have mentioned, I found the spoiler-heavy hypocrisy of "Getting along...but don't trust anyone" particularly insightful (funny? maybe), given the now usual plot twists of post-Frozen 10's Disney films.

We'll have to wait for a third 20's film before judging whether Evil Clouds are officially starting to be overused.
Top

Why does disney hate pixar and want them to be direct to video?

Also yup these movies may be banned from some theatres like raya was!


A number of major circuits — including Cinemark in the U.S. — refused to carry Raya because they wanted more generous terms in exchange for the film playing day-and-date. It remains to be seen whether that pattern

There is nothing wrong with the traditional three month window. I get that streaming is the new thing, but at the end of the day, it’s still really a subscription form of PVOD, especially when you then pay for a PVOD on top of your subs.

Maybe make titles like that play after a month, giving the big screen experience a chance for a film to play as intended for a few weeks, before PVOD and then regular home video after three months. Then everyone gets the big opening weekends that the studios love and audiences flock to, while then being available to the same premium audience via streaming after a 30-day "premiere" window, meaning most folks would do their repeat business via their subscriptions instead of repeat theatre visits.

Once the shine of a new bit screen and must see steaming title is done, revert to the home video model of three months and then regular VOD and television markets. Streaming really only need be the interim between a theatrical and home video release.
Top

It's still the pandemic--
No one ever WILL like PVOD, either by itself or on top of subscription, in a healthy year...But at the same time, some ambitiously desperate budget-recouper like "Monster Hunter" can try to play "rebellious" and say "We're in theaters, baby!" to artificially manufacture themselves into a physical-theater "event", but that doesn't mean a box-office majority of people are that stupid.

Basically, what we're seeing is studios' last holdout to stubbornness in the face of grim reality, in an industry they created only in the last ten years, when they decided to make it All About Da Weekendz.
Top

Big opening weekends date back to the 90s, basically after the massive debut for Batman '89.

Back then the magic number was "the $100m barrier" that it reached faster than any film before, and throughout the next decade — gulp, thirty years ago! — they started chasing to make that in the first month, then the first week, and the first weekend, which I believe Spider-Man first achieved with $114m opening in 2002.

Since then, it’s expected that every intended blockbuster open to *at least* $100m, so this has been going for for much longer than the last decade.
Top

And...it’s not so much the usual HT treatment as just a plot-picking exercise, and a pretty unfunny one at that.

Whatever they say about the elements, Raya just *works* as a slice of entertainment. I’ve been thinking about this more and more today, and the more and more I like it.

Ha! We disagree about the film and the HT! That thing was hilarious and spot on!

I got to see Raya in theaters last weekend, and I loved it. It could be a matter of expectations, as James said in his review, but think it is better than Moana and Frozen, and maybe even Big Hero Six. I had seen the trailers and was very annoyed by the modern dialog, but when I saw the movie, I thought it wasn't as bad as the trailer made it look (I was really pleased that the "digestion will be faster now" line that was in the trailer got cut from the movie), and as the movie moved forward, I noticed it even less. I also loved the music.
Top
Post Reply
218 posts