Disney's Raya And The Last Dragon

Ben wrote: ↑
March 24th, 2021, 6:04 am
Big opening weekends date back to the 90s, basically after the massive debut for Batman '89.
Since then, it’s expected that every intended blockbuster open to *at least* $100m, so this has been going for for much longer than the last decade.

Yes, I remember Disney trying to reassure us that 'No, really! Dick Tracy finally made $100m!...It's okay, now!"
But that was 1990, before the overbuilt explosion of corporate shopping-mall cineplexes, which went from local three-screens to double-digit leviathans, literally tripling the number of screens a "Wide release" could make on opening from 1600 to 4500.

Which also meant that by the 00's, a normally six-week hit now spent itself out in one-third the time for everyone in the country to see it once (and then decide whether to buy the disc), and by the 10's, a "hit" movie was lucky to get a two-week lifespan, and a runaway Pixar phenomenon, three.
It now became ALL OR NOTHING for studios to sell their race for financial bragging rights as a three/four-day rock-concert "event", until the idea that you could go to a movie on, say, Wednesday if you felt like getting out of the house, almost literally vanished from our culture. We were no longer audiences being entertained, we were statistic-cattle being harvested for corporate games...Moo.

That's one thing I'm enjoying about seeing studios panic over the fact that the pandemic seems to be lasting a lot longer than their original six-month-delay estimates, and watching all their "corporate franchise" strategies of '19 slashed by the grim scythe of the Pestilence horseman.

We have SO much opportunity to rebuild that more sane moviegoing model we had in the 80's and 90's, by examining just what the heck we want out of movies, where and why, we'd be literally killing the industry not to take it.
Top

I can't help but feel you are baiting someone to correct either your use of "literally" or your math.

I think Rand's quote got a little fudged there!

As for what came before it, the words "equine dung" come to mind. All of that generalisation does not explain or take into account the dark magic of such phenomena as The Greatest Showman and other sleeper hits.
Top

I can't help but feel you are baiting someone to correct either your use of "literally" or your math.

Ben wrote: ↑
March 24th, 2021, 10:45 pm
All of that generalisation does not explain or take into account the dark magic of such phenomena as The Greatest Showman and other sleeper hits.

Oh, I think we KNOW why fan audiences tried calisthenically, and in vain, to manufacture a "cult" over Greatest Showman, nudge-nudge, wink-wink. 'Nuff said.

The complete lack of any songs in Raya might, kind of, y’know, be the reason there are no singalong showings. Just a thought.

And Showman was a natural phenomenon that occurred long after 20th had basically given up on it. The reason? Many people were late in discovering that it’s an awesomely entertaining modern musical with old-school charm.

As for Alita: Battle Angel (way right title around), it was actually my *male* friends that loved it the most and kept on at me to see it. And I’m glad I did.
Top

And Showman was a natural phenomenon that occurred long after 20th had basically given up on it. The reason? Many people were late in discovering that it’s an awesomely entertaining modern musical with old-school charm.


I feel The Greatest Showman is one of those rare musicals where people were mentally shouting 'Stop talking, get back to singing'. The songs were definitely the highlight of that movie.

In the showing I saw of Raya, I feel some songs would have helped the kids in the cinemas focus better.
Top

With California softly reopening movie theaters, went to see Raya just now. Really liked it. Seeing it on a theater screen, especially in IMAX, probably enhanced the experience a lot more than it would've watching it for the first time on my TV screen, but I'm pretty sure I would've enjoyed it regardless.

Now to get the artbook.
Top 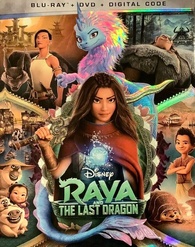 Although it’s not a digibook, that Target has the nicest art, again, though I already have my regular disc on the way! This is easily my pick for our family Christmas movie this year.
Top

Since I already have the artbook, was initially set on nabbing the steelbook, but they're sold out around me. Nearest one available is an hour away. So I just picked up the Target exclusive, which is still a nice pick-up.

So torn on which to pick up! I like the Club cover, though I don't think that DMC Canada has it. The Steelbook is sold out here, but I can still get it from Zavvi. The Target set is nice, too, but it would have to be imported, too. (Too bad that Target botched their Canadian launch so badly a few years ago.) Even if I just go for a regular edition, I'll have to import, though, as Canadian copies have horrible bilingual design - can't stand that.
Top

Just popped the disc in for a look at the features.

They have a nice little 2-minute outtakes reel highlighting their doing voice recordings from home and some of the fun that results (such as dropped signals during a recording with Sandra Oh and Awkwafina's cat being a disruption).
Top

If there was one thing that (slightly) marred Raya for me, and as I mentioned in my capsule review above, it was the quality of the home recording.

Most ears won’t hear these things, but I started in sound, and through the pandemic the *huge* drop in audio quality on any number of shows has been noticeable to me, often without any real reason to be. One point seems to be the mics that they send out with location crews are just so lousy! I don’t know why they can’t send out decent grade mics!

And some studio shows have been suffering from all over the place sound levels, especially on "phone ins" with people coming on via Zoom and the like. Now, *obviously*, a lot of that can’t be helped in quality, but the overall levels should be okay!

But, going back to Raya, I really could tell when a line or a scene had been grabbed in a closet or somewhere. I wasn’t listening for it, but there’s a scene in a cave, I think, where it just hit me and I was reminded that a lot of this was recorded this way. Again, though, this stuff can be treated...and they were supposed to be *in a cave*, so there’s more that could have been done to make it feel better.

It’s not bad across the board, and certainly not the whole film, but a fair few chunks just sounded dead to me: not in performance, but in aural tone quality.
Top