If you don't know by now, Davy Jones, former teen heart throb and member of the Monkees, passed away Wednesday in his Florida home after a massive heart attack. He was 66.

There's not a lot of details but apparently his wife called 911 after his episode and he was taken straight to a local hospital where he was pronounced dead. He's survived by his (second) wife and four daughters from two marriages...

Wow... and another icon from my childhood passes on.

The Monkees' TV series was already in reruns by the time of my earliest memories of the group. They had a brief resurgence of massive popularity in the mid-1980s at the time of the group's 20th anniversary. They released a new single that charted in 1986!

This particularly hits home because Davy was around the age of my parents... He's smack in the middle between my Dad and Mother age-wise.

Forget about the controversy over whether the Monkees were a "legitimate" rock group or not (they were) and the fact that the Rock N Hall of Fame regularly admits new members who are "questionable" rock figures to begin with! A lot of people feel like they've lost either a childhood figure (he was an ex-crush of a lot of women in their 40s, 50, and 60s) or an uncle.

To my way of thinking, it's a toss-up about whether Davy or Micky Dolenz was the better vocal leader of the Monkees. They were both excellent and performed as lead vocals in about an equal number of hits as far as I know. I do know that Jones performed lead vocals on what's my favorite Monkees hit, "Daydream Believer."

I think it's only appropriate I post the link to this old video before the copyright police disable its audio...

I became a huge Monkees fan during their 1980s resurgence. I have the entire TV series on DVD, and their complete discography on CD (including a few 'live tour' bootlegs) .. and still spin 'em up, now and again.

In teeny tiny tribute to Mr. Jones, here is an ancient doodle I'd posted in an Animation Nation 'art challenge' many years ago (the theme was "Monkeys and Cheese"). 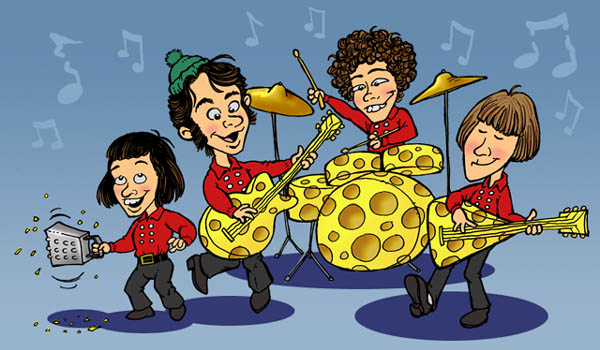 Did you draw that?
Top

Yeah; a long time ago (circa 2003, IIRC). The lineart was doodled on paper directly with ink, then scanned and colored with a Wacom in Photoshop.
Top

Wow, impressive. And it's now my iPad wallpaper!
Top

It goes in my screensaver ("My Pictures") folder on my Mac now!

Yeah, the Monkees should be in the Rock N Roll Hall of Fame if there's any justice.
It's just plain, mean spitefulness that keeps them out.

The Monkees' last great track had to "Then and Now" which was produced for the 1986 tour. It was a new recording of an existing song but it proved the guys (at least Tork and Dolenz; the other half of the Monkees were elsewhere) still had it.

Not gonna be the same after the death of Jones. I don't know how you can call it the group the Monkees now that he's gone... (Well, to be honest, I think Dolenz was really closest to being the heart of the group. Toss-up between whether I like his or Jones' vocals better. I appreciated both guys!)

So, so many great hits from what the unkind critics call "The Not Fab Four."

The guys had great vocal sound and some really great songwriters behind them. What the RNRH has done to them is shameful in light of what's passed this week...
Top
Post Reply
7 posts • Page 1 of 1